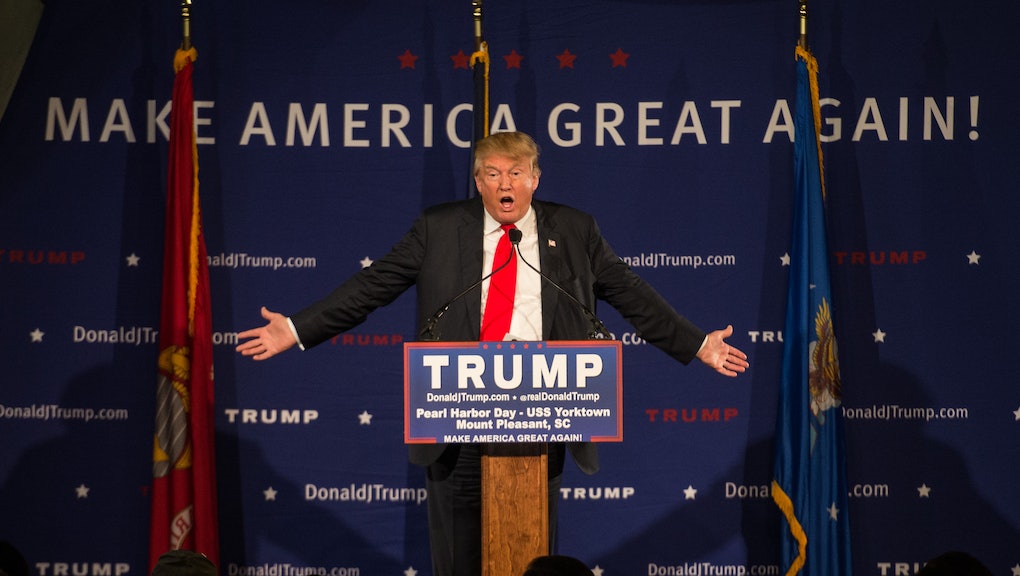 With his impressive Super Tuesday performance, Donald Trump is running away with the Republican nomination, and he's leaving the GOP establishment in his wake.

Trump didn't just win big on Tuesday, he dominated. Going into Super Tuesday, it had been 28 years — during the election of George H.W. Bush — since a GOP presidential candidate won primaries in both New Hampshire and Georgia. Not only did Trump win Georgia, he also took home the top prize in Virginia, Vermont, Tennessee, Arkansas and Alabama. The clock is running out for Trump's Republican rivals Marco Rubio and Ted Cruz, and it's looking increasingly likely that Trump will face off against Hillary Clinton in November.

All of this raises several questions. Why didn't anyone see this coming? How did the media fail to predict the Trump phenomenon? And why is Trump's iconoclastic style and brash message resonating so deeply with such a wide swath of the conservative electorate?

Much has been written about Trump's anti-establishment appeal. Voters are angry, trust in government has waned and Trump, so the theory goes, is the larger-than-life businessman who can stand up to the establishment and Make America Great Again.

The United States is currently undergoing structural changes on a scale not seen in generations.

Surely, Trump's outsider status is a major part of his ascendancy. But to truly understand his rise, you also have look deeper, at the way Trump is stirring up anxiety among the electorate stemming from the tectonic geopolitical and demographic shifts that the United States is experiencing.

A rapidly changing country: The United States is currently undergoing structural changes on a scale not seen in generations.

Every four years, the National Intelligence Council, a collection of the smartest minds at the highest levels of intelligence and policy, releases a Global Trends report that serves as a sort of crystal ball as to what the future holds and the role the U.S. will play in it. While not perfect, the report is widely regarded as the gold standard of U.S. intelligence analysis and gets presented directly to each incoming president. The most recent briefing, released in December 2012 after President Barack Obama's re-election, provided an unbiased examination of what the world will look like by the year 2030. The report is exhaustive, but highlighted two seismic trends that are particularly relevant to understanding the Trump phenomenon.

The first pertains to the country's role in the world. Simply put, the U.S. will no longer be the world's superpower by 2030. Here's the key sentence: "With the rapid rise of other countries, the 'unipolar moment' is over and Pax Americana — the era of American ascendancy in international politics that began in 1945 — is fast winding down."

In essence, we can expect to see power become much more diffuse over the next decade, as technology levels the playing field. The country's economic and geopolitical dominance will suffer as a result. The U.S., European and Japanese share of global income is projected to fall from 56% today to under half by 2030. Meanwhile, political and economic power will shift to the east and south; China's economy is projected to surpass the U.S. a few years before 2030.

This is extremely important to grasping Trump's appeal. Trump has capitalized on this shakeup in power, clinging to a vision in which the U.S. remains the lone superpower. He regularly rails against countries like China, Japan and Mexico for stealing U.S. jobs. Though that message is clearly resonating, it doesn't mean Trump will be able to deliver on his promise. According to the NIC, "the United States' (and the West's) relative decline vis-a-vis the rising states is inevitable." That's the case regardless of who gets elected president.

Trump has capitalized on this shakeup in power, clinging to a vision in which the U.S. remains the lone superpower.

The second trend is related to demographics. The U.S. population is rapidly getting older and far less white. In fact, the Pew Research Center projected that whites will be a minority (47%) in the United States by 2050. Meanwhile, the population aged 65 and over is projected to almost double by 2050.

Something else is happening too. The world's population is on the move, flocking to urban areas. Here's the second key line from the NIC report: "The demographic arc of instability will narrow. Economic growth might decline in 'aging' countries. Sixty percent of the world's population will live in urbanized areas; migration will increase."

We're living through a massive shift in global demographics. Today, roughly 50% of the global population lives in urban areas, according to the report. That is projected to rise to nearly 60% by 2030, or 4.9 billion of the world's 8.3 billion people. That doesn't even account for the 60 million displaced people who fled their country of origin in 2014 as a result of war, persecution and conflict.

Migration will increasingly strain the resources and cities of the world and the U.S., and also force American workers to compete with overseas labor. That's critical to understanding Trump's appeal. Missing in the recent dustup over Trump's refusal to strongly disavow KKK leader David Duke is the recognition that Trump's very candidacy has been predicated on protecting a white-majority which is slipping away. Building a wall to keep out immigrants, banning Muslims from entering the U.S. — Trump's broad thesis has been that the country's problems stem from those who don't look like him. As the NIC projects, however, no presidential candidate — not Trump nor anyone else — will be able to prevent the wide-scale demographic changes in store.

Why it matters: Americans, across party lines, are anxious and angry, in part because the country's demographics are rapidly changing and the U.S. is growing less powerful relative to the rest of the world.

None of this is to say that Trump is an inevitability; indeed, a new CNN poll shows both Clinton and Bernie Sanders would defeat Trump if the election were held today.

But these trends should serve to underscore that Trump's rise is no accident. He's a masterful entertainer, with a unique ability to command media attention. But, he's also a product of our evolving environment. As these changes play out over the next two decades, we should expect to see more political figures like Trump who generate appeal by harkening back to an America that no longer exists.