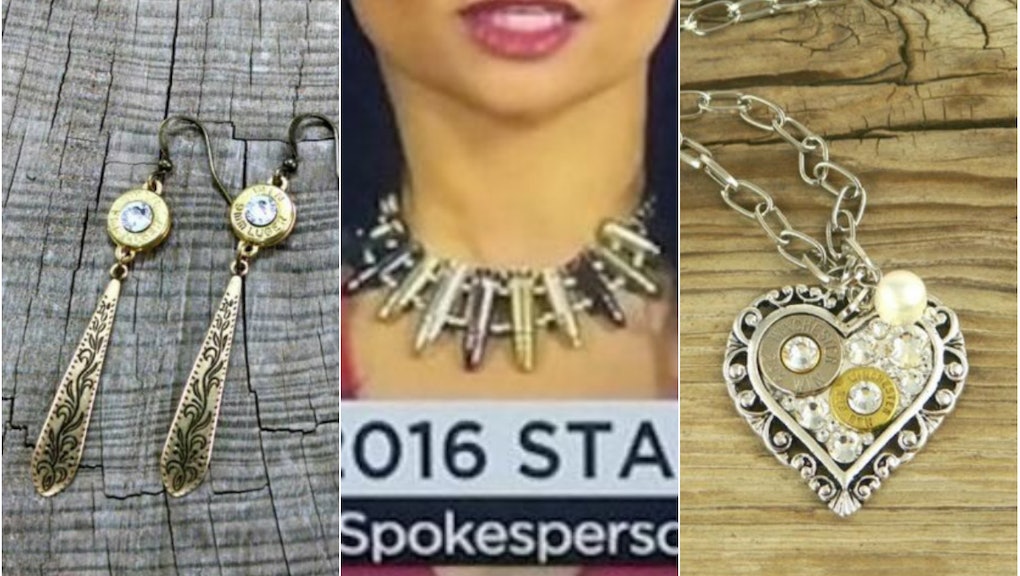 In December, Donald Trump's spokeswoman Katrina Pierson wore a necklace made of bullets for an appearance on CNN. Twitter erupted as expected, quickly condoning her glamorization of guns.

But on Twitter, Pierson turned the conversation to the necklace itself and how it used real ammo "Made in #Texas!" She also added the message: "Support your local small business owners!"

Which small businesses? Pierson's necklace is just one piece of a small but growing bullet jewelry industry, as evidenced by the more than 9,000 bullet necklaces, 5,000 bullet earrings and 2,000 bullet bracelets for sale on Etsy. In a world long seen as masculine, female gun owners are carving out a space of their own.

Women getting creative: For years, Barbara Rhodes and her family loved to go to the shooting range. But the more she went, the more bothered she was by how after the shots were fired and targets were hit, no one did anything with the leftover brass bullet shells or case heads — the dime-sized slices of brass found on the bottom of bullets — left on the range.

So she started thinking creatively and in 2009, her daughter suggested they make jewelry out of the brass pieces, and High Caliber Creations was born. The company, which is based in Illinois, sells bracelets encrusted with case heads, necklaces with a 9mm cartridge and a pink crystal heart, rings embedded with case heads and elaborate collars with a full metal jacket bullet in the center.

In some pieces, the bullet is unrecognizable and in others, it's obvious.

According to Rhodes, the shop specializes in personalization and engraving, which has helped draw a diverse set of customers to her shop.

"As far as men go, we have soldiers and hunters," Rhodes said in a phone interview. "We have bikers. Pretty much all ages too. As far as the women go, we do have a lot of wives and girlfriends who buy for their soldiers. They'll have a note on there like 'I love you.'"

Her customers are all looking for a different way to celebrate their right to bear arms — especially women, who want to celebrate that right as much as men.

Highlighting the female experience for gun owners: Much like Rhodes, Karen Kirkham was part of a pro-gun family, looking for a new professional direction.

"We were entrepreneurs," Kirkham, who's based in Louisiana, said in a phone interview. In 2010, she and her husband started Bullet Designs. The bullet pieces are (relatively) understated, with popular silhouettes in silver and gold with the occasional Swarovski crystal embellishment — as if David Yurman was a Second Amendment fan. It didn't take long for them to figure out their ideal customers.

"We'd go to gun shows thinking about men being our target audience," Kirkham said. "But then we attended a local craft show for women, and that was the point in time that we knew."

In the past few years, even as the debate about gun violence rages on, there's been much attention paid to women and their increasing love of guns. The National Rifle Association reported a 77% spike in women owning guns from 2011 to 2014, and a 2015 report from the National Shooting Sports Association claimed that 5.4 million women had gone to target practice between 2001 and 2013. In 2015, one of several female "poacher hunters" drew intrigue for being "a badass." Just this January, NPR aired a story on the rise of gun-related fashion accessories.

According to Rhodes, the gun industry started paying more attention to women around 2012 and 2013 — which is when she saw more women paying attention to her business as well.

"Around that time, I think it's when more women started getting into the shooting industry, and people thought that if more women were involved, they'd want more jewelry," Rhodes said.

In catering to that demand, female entrepreneurs are showing the gun industry how valuable women can be when it comes to business. Bullet Designs has more than 150,000 likes on Facebook and according to Kirkham, 95% of those followers are women. It creates hundreds of pieces a day to keep up with demand, selling more than 200 a day between its website and trade shows.

Another company is Gun Goddess, an online retailer run by Athena Means. Launched in 2012, the store came from Means' struggle with finding specialized, feminized gun-related products for herself.

"I was starting to shoot more, trying to shoot more on the range," Means said in a phone interview. "I needed accessories and gear. I wanted [them] to reflect that femininity and my personal style and just had a hard time finding stuff that was made for women, designed for women."

Combining passion and politics: For the growing number of American women who are exercising their right to bear arms in their downtime, bullet jewelry — along with accessorized holsters and purses with gun compartments — is just an extension of their personal style.

"They want to match their earrings to their guns," Kirkham said, describing her clientele.

According to Means of Gun Goddess, the bullet jewelry represents a personal affection for firearms. Like a girl would want to wear a tennis racket charm on her bracelet, some women want to wear a piece of a bullet.

"I think it's just a reflection of something that is close to their heart, an activity that they enjoy," Means said. "It's an important part of their lives from a Second Amendment perspective. It's just a creative way to reflect what they love."

"It's not for someone else's benefit," she added. "For a lot of the pieces, unless you look twice, you might not even notice what they're made of."

As Kirkham tells it, "We had a lady who requested to be buried in her bullet jewelry."

But the earrings and other pieces also stand to make a bigger statement about empowerment and Second Amendment rights, Kirkham said.

"I think it's OK that women are making a statement now by saying, 'I can protect myself,'" she said. "You look back at women in the past in generations [who] were helpless. They run to the man to take care of them, and now that's changed."

(On the flip side, there are jewelry companies using guns to make a different statement. Liberty United, a company launched in 2013, turns ammunition into jewelry in order to get those bullets off the street, with a mission to protect as many people from gun violence as possible.)

These women-led, family-run businesses may not all be making the same exact statement about the Second Amendment and pro-NRA politics. But each is celebrating women's love for guns, cementing their place in a traditionally masculine world that's seeing more and more women join its ranks.