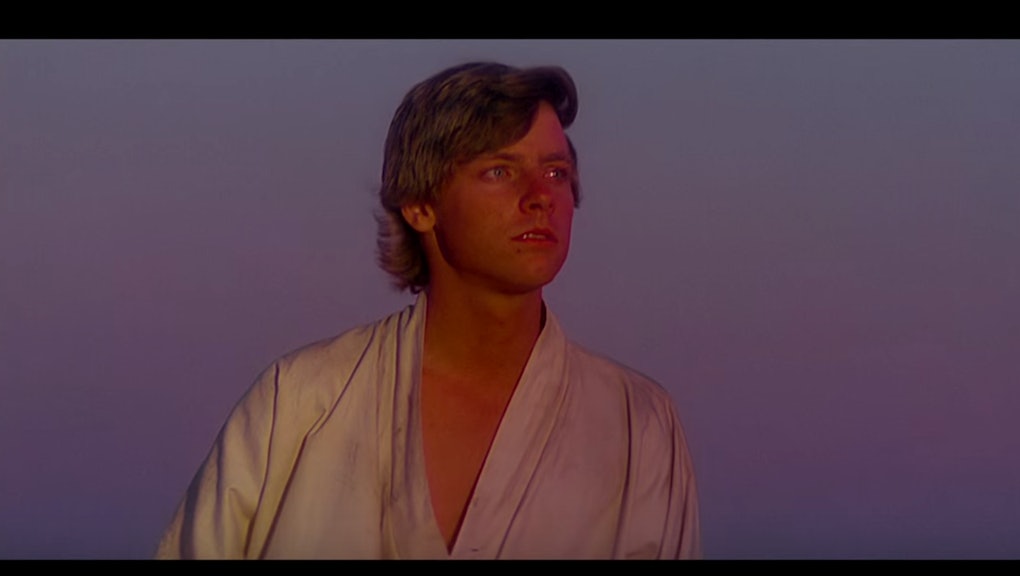 In a galaxy far, far away, it's hard to imagine — and frankly, narrow-minded — to assume there are no LGBTQ people. J.J. Abrams, director of the seventh and most diverse Star Wars film in the series, Star Wars: The Force Awakens, has said as much, and wants gay characters introduced in future installments of the series.

However, a newly introduced gay character in Star Wars might not necessarily be the first. Mark Hamill, the actor who played Luke Skywalker in the original trilogy and The Force Awakens, said in an interview with the Sun on Thursday that Luke's sexual orientation is open to interpretation in the films.

"Fans are writing and ask all these questions, 'I'm bullied in school ... I'm afraid to come out,'" Hamill told the Sun. "They say to me, 'Could Luke be gay?' I'd say it is meant to be interpreted by the viewer. If you think Luke is gay, of course he is. You should not be ashamed of it. Judge Luke by his character, not by who he loves."

This isn't the first time Hamill's addressed the question, either. When a fan on Twitter asked him about Luke's sexuality in January, he responded in a direct message to the fan, saying "Luke is whatever the audience wants him to be, so you can decide for yourself."

Furthermore, The Force Awakens actor Oscar Isaac has hinted that a "subtle romance" is happening with Poe Dameron, the Resistance X-wing pilot, though he did not say with whom. Though not explicit, fans have theorized that this romance could be with the Stormtrooper-turned-Resistance fighter Finn (John Boyega), who escapes the First Order along with Poe, before their fighter crashes on the desert planet, Jakku.

For one of the most popular franchises of all-time, it would be an important and groundbreaking milestone for LGBTQ characters in film — specifically in a sci-fi epic.

"A gay character in the biggest franchise in the universe, one linked to so many childhoods and formative to what kids think of as right and wrong, wouldn't quite be the same as blowing up a Death Star, but it would be close," Eli Keel wrote for Salon.

Whether or not Luke or Poe — or both — are queer, The Force Awakens was a welcome first step for a mainstay franchise to signal inclusivity. Moreover, with Abrams' on-the-record push, a gay character in the Star Wars universe seems a matter of when, not if.

"To me, the fun of Star Wars is the glory of possibility," Abrams said, according to the Daily Beast. "So it seems insanely narrow-minded and counterintuitive to say that there wouldn't be a homosexual character in that world."

Recent controversies surrounding queer movies and performers and a lack of gender equality at the industry's biggest awards show have made visibility all the more vital. The fact that Star Wars' latest director and one of its actors want gay representation is important — and should be seen not as the last step, but an important first one.