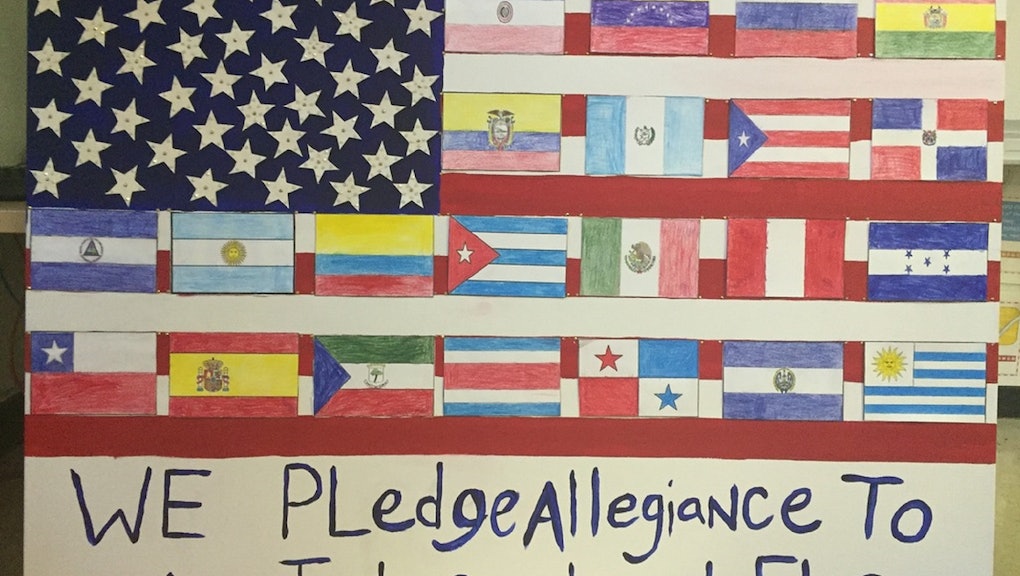 The article, which appeared on Fox News host Sean Hannity's website, blasted the school for this student-produced mural of a U.S. flag overlaid with foreign ones, accompanied by the caption "We Pledge Allegiance To An International Flag."

"It is widely accepted that American public schools are controlled by liberals," read the article, which was posted by Hannity's staff. "It seems like every day, we see new examples of American schoolchildren being indoctrinated with left-wing ideas."

"This latest example was brought to our attention by a concerned parent."

After noting that the flags on the project consist mainly of Spanish-speaking countries and Russia, the article concluded, "This is the type of globalist indoctrination we have come to expect from the public school system, but telling impressionably young American children that their loyalty should lie with some nebulous idea of a global community rather than their own nation is a new low."

The story was later picked up by other conservative outlets including BizPac Review, which called the assignment "lib indoctrination at its finest," and InfoWars.

On social media, aggrieved users suggested the school should be bombed, school staff shot and otherwise advocated violence in response to the story.

In one profanity-laden email, a harasser said the assignment was like "pedophilia" and called district staff "Fascists and Communists."

Before the posting was removed by P.S. 75's principal, it was accompanied by the caption, "The fun quote on the bottom is about unity and creating an environment in which everyone is welcome! 'We pledge allegiance to an International Flag!' Our dual language classroom strives to be a place that everyone feels welcome!"

Students at the school are taught in both English and Spanish.

The mural was intended to reflect the ethnic and national diversity of P.S. 75's students, Patricia Frisbie, donation chair and V.P. of fundraising for the PTA executive board, told Mic in a phone interview.

At first, they had no idea why the threats were coming in. But Frisbie said the school received numerous threatening phone calls, and the email account linked to the donation was receiving "very threatening and vile, profoundly disturbing" emails. The school's Facebook and Twitter accounts were similarly barraged.

"It's definitely ongoing and it's happening as we speak," Frisbie said. She added the school would be holding emergency meetings and contacting police for extra security on Monday and throughout the week.

Critics are "really blowing this out of context," Frisbie continued, saying she believed the outrage directed at P.S. 75 was connected to the harsh tone of national politics in 2016.

"These are a bunch of 5-year-olds getting together and making artwork expressing how they feel about school ... it definitely touched a nerve."