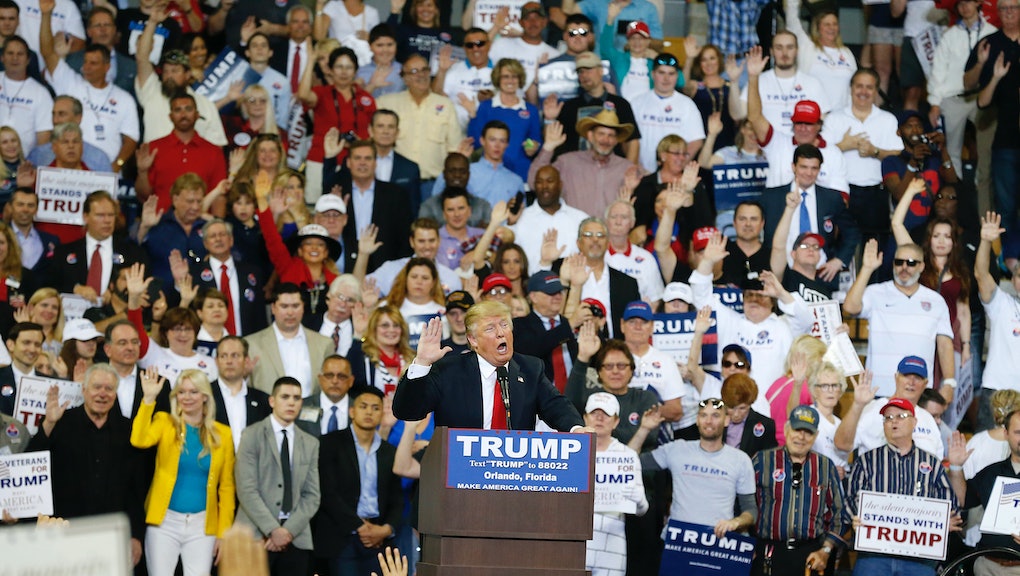 At a rally in Orlando, Florida, Republican presidential frontrunner Donald Trump asked his supporters to raise their right hand and pledge they would vote for him in the upcoming primary election.

"Let's do a pledge," the real-estate billionaire told the crowd. "Everybody, who likes me in this room? OK, I've never done this before, can I have a pledge, a swearing? Raise your right hand. I do solemnly swear that I no matter how I feel, no matter what the conditions, if there's hurricanes or whatever ... will vote on or before the 12th for Donald J. Trump for president!"

The resulting image of Trump supporters raising their right hands and repeating Trump's words is visually striking, to put it mildly.

On the other end of the political spectrum, Gawker referred to the image as "familiar" on Facebook, calling him the crowd's "supreme leader."

Trump may very well have known what kind of debate the image would inspire. The candidate has generated a nearly endless series of controversies, from his professed desire to bar all Muslims from entering the country to stating that the U.S. military should kill terrorists' families, amid an election defined by anxieties over global power struggles and the U.S.' shifting demographics.

Leaders in the Republican Party are furious over his rise, but are fast running out of time to stop him. Trump demolished competitors Texas Sen. Ted Cruz, Florida Sen. Marco Rubio and Ohio Gov. John Kasich in the recent Super Tuesday vote, even as the race drew record turnout.