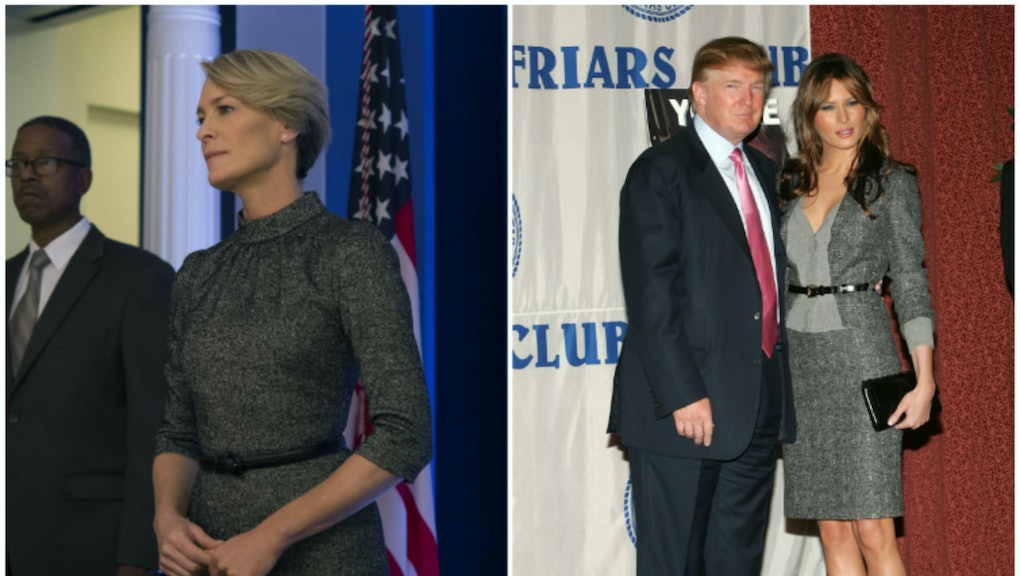 Whether you've watched a single episode of House of Cards or already binged your way through all of season four, you know that really only one thing about the show is constant: From pearlescent satin gowns to expertly fitted suits, Claire Underwood knows how to fucking dress.

Given that we're entering into the thick of the election season, we couldn't help but start thinking about how the Netflix show's resident first lady compares to our current batch of possible first spouses. Especially one in particular: Melania Trump.

Sure, they are different women. Underwood, played by Robin Wright, clearly wants to take a more political role as a first lady than Trump does. And sure, Underwood is the wife of a Democrat and Trump is the wife of a... Donald. But even if you love one far more than the other, there's no denying the eerie similarities between their effortlessly chic, slick styles.

Still doubt us? Just take a look for yourself.

They both love a good menswear-inspired look.

Trump has worn such power suit-type looks at various red carpet events or above, when she rang the Nasdaq bell in 2008. Of course, Underwood has worn them mostly in instances of tense phone calls, which is basically all of what House of Cards is.

They're both fans of camel-colored jackets.

For Underwood and Trump, neutrals are the way to go. Both women, serendipitously or not, tend to go for expertly tailored camel-colored jackets. As any longtime viewer of the show can note, Underwood loves her suit jackets as much as her husband loves his threesomes.

Both wear black trench coats when it's not even raining.

Although trench coats have a special ability to make anyone who wears them look like a spy, both of these women merely look like they're ready for anything. For Trump, that might mean moving into a bedroom at the White House, while for Underwood, that might mean a quick escape from Secret Service's watchful gaze.

They've got a lot of love for white formalwear.

If anything, Underwood's taste is just a tad more professional and office-appropriate, but that's expected of a first lady. Wearing all white is a serious thing.

When they wear gray, they belt it.

Yet again in this case, Underwood went for a high-collared silhouette while Trump showed more skin, but they both were merely dressing for the event. For Underwood, it was a press conference; for Trump, a celebrity roast luncheon in 2004. Ah, the good ol' days.

When forced to wear color, they go bold.

Although it can be a drag on their untouchable, neutral-loving glamour, both women pop a little color once in a while.

While they don't yet have the title of first lady in common, there's no denying the similarities between the way the two dress for the job. Still though, Trump's gaze is no match for Underwood's signature spine-tingling death stare.