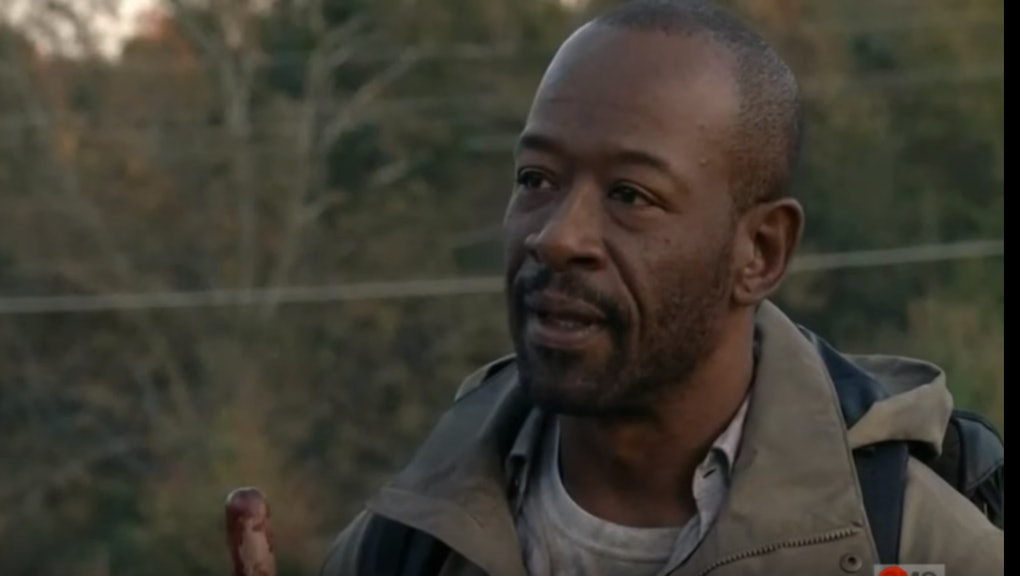 In The Walking Dead's television history, opposing the leadership choices of Rick (Andrew Lincoln) is a near-surefire way to be killed off. Shane (Jon Bernthal) learned this lesson in season two, and the rebellious prisoners who inhabited the prison when Rick and Co. entered the premises were dealt a similarly gruesome fate. (Warning: detailed spoilers for "No Tomorrow Yet" and the comic books ahead).

As such, questioning Rick's leadership choices isn't just a point of contention in the show. It can lead to very deadly consequences — all the more amplified with the upcoming arrival of a menacing villain, whose lackeys have already made their presence now in the series.

After last episode's introduction to the Hilltop Colony, Rick's group brokered a deal with its leader, Gregory (Xander Berkeley) to eliminate Negan (to be played by Jeffrey Dean Morgan)'s group, The Saviors, who are taking half of Hilltop's crops. Additionally, Negan had a member of the Hilltop "send a message" to Gregory, stabbing him in the stomach for a smaller-than-expected supply haul.

Now, Rick has a plan to handle The Saviors, which is pretty straightforward: bringing the fight to them. However, Morgan (Lennie James) would rather try and handle the conflict peacefully — attempting to talk Negan's crew before starting with any physical confrontation, and avoid any unnecessary bloodshed.

Ultimately, though, the group is in favor of Rick's plan, with a member of Hilltop helping Rick map out The Saviors' complex for an attack. Negan's place is heavily guarded, it's unclear how many members are in the compound and Rick's group can only go through one entrance. Basically, it's tough sledding. However, because Negan wants Gregory to pay for purportedly skimping on crops, Rick's using a zombie head similar to Gregory's features to catch The Saviors off guard.

When they arrive to the complex, they successfully kill the two guards at the entrance — using the prop head as the perfect decoy. As the group goes through The Saviors' compound, they gradually kill Negan's group members in their sleep. While Glenn (Steven Yuen) takes care of two Saviors in a room, he sees a disturbing set of photos hanging above one of their beds — shots of dead bodies with their heads bashed in, a disturbing premonition to his comic book fate at the hands of Negan's signature weapon: a barbed wire laced baseball bat, which he likely used on the victims in the photo.

Rick's invasive plan is going along smoothly, until Abraham (Michael Cudlitz) is stabbed (non-fatal, though) by a member of Negan's group, and he is able to sound off a community-wide alarm that sets off a bloody and bullet-filled confrontation. Amazingly, none of the group is killed off — and while they seemingly rid the compound of every Savior, they openly wonder which one they killed was Negan (of course, none of them were).

Meanwhile, the Twittersphere had its mind collectively blown over the bloody aftermath of the encounter:

In the end, one member of the group survives, and before they're able to finish him off, his radio goes off with a chilling message: "We have a Carol and a Maggie." Obviously, someone's taken them hostage — and by having two of the group's most important members taken, the raid certainly wasn't a victory. Moreover, it's expected that this wasn't the full brunt The Saviors — rather, just a small taste, as we still haven't seen Negan on screen.

However, would Morgan's peaceful plan have worked better? Based on the interactions they've had with Negan's group members so far — stopping Daryl (Norman Reedus), Abraham and Sasha (Sonequa Martin-Green) at gunpoint on the road, threatening the Hilltop Colony by having their leader stabbed and bedside photos of bludgeoned heads — absolutely not.

There are no deadly consequences for Morgan's disagreement of the plan doled out by Rick. Instead, the fatal repercussions might've been agreeing to attack Negan in the first place. They might have won the battle, but the war's just started.