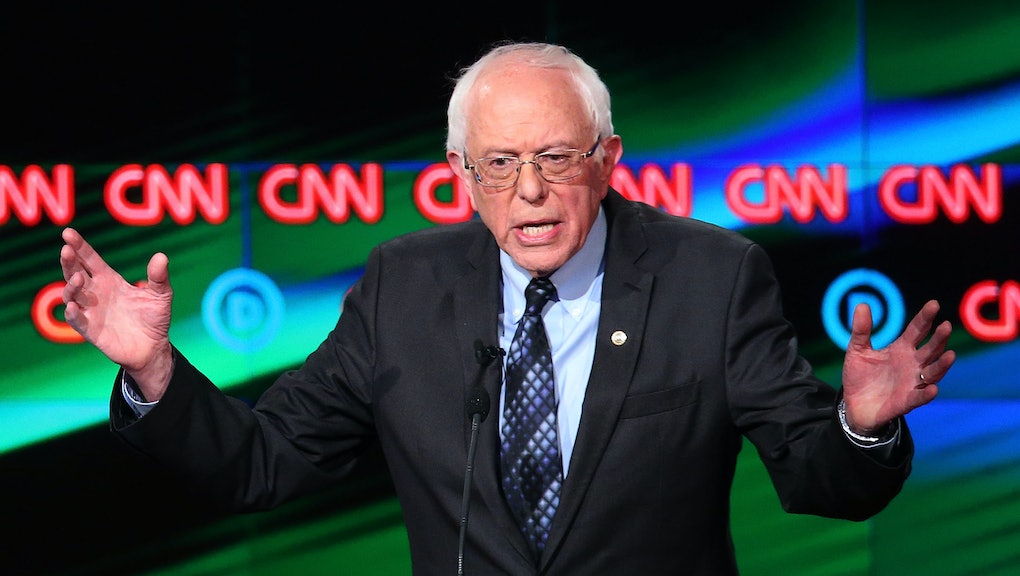 Let's begin with the easy part.

Absent a black swan event, Hillary Clinton will hold off Bernie Sanders and secure the Democratic nomination for president. Even after Sanders' robust victories in Kansas, Nebraska and Maine this weekend, he still badly lags Clinton in the delegate count, with 498 to the frontrunner's 1,129.

With 2,383 delegates required to seal the nomination, he needs to win about 60% of the remaining pledged delegates and superdelegates up for grabs — a hurdle that the demographics of upcoming contests make it excruciatingly difficult for him to clear.

But even if Sanders' odds of taking up the Democratic mantle this fall are vanishingly small, he won't be leaving the stage anytime soon — and his performance at Sunday night's debate in Flint, Michigan, illuminates why.

Flawless? Not quite: Never a polished debater, Sanders didn't outshine Clinton rhetorically. A hedgehog running against the quintessential fox, he didn't display the same policy dexterity that she did, often falling back on his standard denunciations of corporate greed and income inequality.

Hoarse and tired from months of nonstop campaigning, he was prickly at times — most notably when he snapped at Clinton for interrupting him, drawing both implicit and explicit charges of sexism from some Clinton campaign staff and supporters.

Yet while Sanders may not have catalyzed the near-miracle that would allow him to upset Clinton, grappling with the Sanders moment and its meaning requires moving beyond a fixation on the vicissitudes of the campaign news cycle.

Given the realities of the delegate math, it's not particularly edifying to ask what Sanders can do to overtake Clinton. We can learn a lot more by asking why he's resonating with a substantial chunk of the Democratic electorate — and on Sunday, the answers were plain for any observer to see.

Trending left: In a Democratic Party where a record number of voters now describe themselves as liberals — a development driven in large part by millennials, a core Sanders constituency — the Vermont senator speaks the language of a party base that abhors what it sees as the excesses of capitalism, favors a robust role for government in guaranteeing social rights and combating income inequality and wishes to crack down on the influence of special interests and mega-donors.

While Clinton has run a campaign harnessed to the ideological makeup of the modern Democratic Party, her centrist record and her close ties to corporations — particularly in the financial industry — was ensured to meet with skepticism among many Democrats, particularly in light of polls that suggest they now view socialism more favorably than capitalism.

Even if the odds overwhelmingly favor Clinton, then, there remains a substantial constituency for Sanders' democratic socialist campaign — and in Flint, he showed no signs that he'll stop spotlighting Clinton's vulnerabilities anytime soon.

On the offensive: Speaking in a state where free trade is about as popular as a Japanese car, Sanders was especially scathing in his assessment of Clinton's history on the issue.

While she opposes the Trans-Pacific Partnership agreement she'd championed as secretary of state, Sanders asked voters to look at her record.

"I am very glad, Anderson, that Secretary Clinton discovered religion on this issue, but it's a little bit too late," Sanders said, addressing moderator Anderson Cooper of CNN. "Secretary Clinton supported virtually every one of these disastrous trade agreements written by corporate America — NAFTA, supported by the secretary, cost us 800,000 jobs nationwide ... permanent normal trade relations with China cost us millions of jobs."

Homing in on the theme that Clinton is a creature of the economic elite, Sanders jabbed at her "friends" on Wall Street during a discussion of the 2008 bailouts of the financial and auto industries, and he reiterated his call for her to release the transcripts of paid speeches she delivered to Wall Street banks after leaving the State Department.

"One of us has raised $15 million from Wall Street for that super PAC. One of us has given speeches on Wall Street for hundreds of thousands of dollars," he said. "Now I kind of think that if you get paid a couple of hundred thousand dollars for a speech, it must be a great speech. I think we should release it and let the American people see what that transcript was."

Though Sanders tussled with Clinton on a range of issues, including gun control, welfare reform, criminal justice and fracking, he all but embraced Clinton's line of attack that he's a "single-issue" candidate.

"My one issue is trying to rebuild a disappearing middle class," Sanders said. "That's my one issue."

Where does he go from here? That message will strike a chord for many Democratic voters — and Sanders will have the resources to continue his campaign well into the spring, given the impressive clip at which he's raising funds from grassroots donors.

He's also likely to nab several more victories, with the Mountain West and states like Wisconsin and West Virginia looking like fertile ground, according to demographic data and polls.

Come July, then, Sanders will arrive at the Democratic National Convention with a hefty portion of the delegates — and delegates mean clout. For Hillary Clinton, Sanders represents a force she can't afford to ignore this fall.