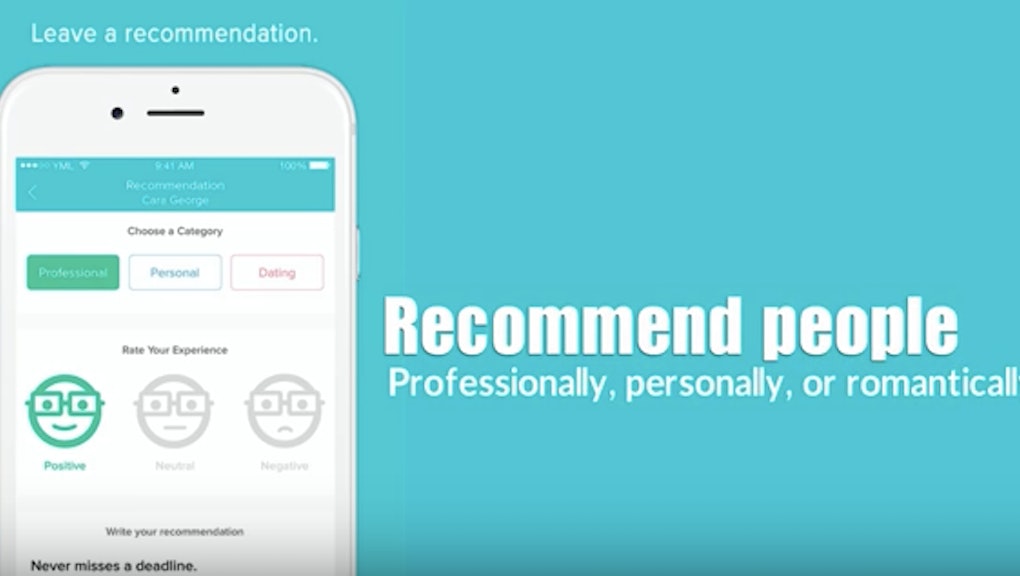 Peeple, Controversial "Yelp for People" App, Out Monday — This Is Why It's Problematic

Peeple, the "Yelp for People" app, as the Washington Post described it, launched Monday in North America for iOS after being the subject of widespread criticism when the founders introduced the concept in the fall. While the final version of Peeple is tame compared to the original concept, many still think its foundation — people rating other people professionally, personally and romantically — has the potential to become a platform for cyberbullying and ruin lives.

"#Peeple launches today in the US, it is unsafe & ethically sick," digital sociologist Harry T. Dyer tweeted Monday. "Please report it in the App Store to force Apple to take action. Please RT."

Read more: Your iPhone Might Soon Remind You That Your Boss Is Watching You

The app allows users to rate other users — strangers, exes, co-workers, neighbors — in three categories: professional, personal and dating. The scale is "positive, neutral and negative" and offers a space to write a custom "recommendation." The app drills home "Your character is your currency."

"When character becomes currency, humanity suffers," a Facebook user wrote on the app's profile. "We are not metrics, and you cannot ethically justify ranking humans against normative social ideals. We are #PeopleNotPeeple."

Peeple replied to the concern: "You can share the recommendations you receive to build your online reputation in social media." The company continued, "That's what we mean by character becomes currency for you. We are not ranking people you write recommendations about them. Try the app to see what it really is about."

Peeple made a couple of adjustments for the official version of the app likely based on the virtually unanimous criticism, including backlash from Twitter queen Chrissy Teigen, when the concept was announced in September.

The original concept proposed rating people on a five-star scale that represented the average of their ratings as if they were a restaurant on Yelp. The tamed version replaced the qualitative star scale with quantitative tallies that instead show how many reviews the user has received. The final version of the app also allows users to control which of their ratings are shared publicly, while the original concept for the app would have automatically shared every review on the user's public profile without their permission.

Still, a premium service called the Truth License that should be available with a paid subscription on the app shows its original controversial features are all but guaranteed to come. It will allow paid users to view all reviews on the app — even the ones purposefully hidden by the reviewee. "This is the same thing Peeple wanted to do when it was first announced, only now you'll have to pay for the 'privilege,'" the Next Web's Amanda Connolly wrote.

Dyer tweeted a screenshot of a Facebook thread between him and the people manning Peeple's profile in which he refuted their statement that the app is a safer platform to "manage your online reputation" than other social media services. "Do you acknowledge that reviews of people based upon social traits are extremely unsafe for members of the LGBT community and for rape, abuse and harassment survivors?" he wrote.

While people can't be rated on Peeple unless they sign up for the app, humans and their innate curiosity despite its potential harm could draw many to the app. Peeple co-founder Julia Cordray told Guardian Australia that more than 10,000 people applied to test the app in beta. But she said the testing proved "that people are very positive" and test users "have enjoyed spreading kindness and accolades while reading what people really think of them."

"We do not tolerate profanity, bullying ... name calling, degrading comments, abuse, derogatory comments, sexual references, racism, legal references, hateful content, sexism and other parameters," it says on Peeple's website. It's unclear how the company plans to control that.