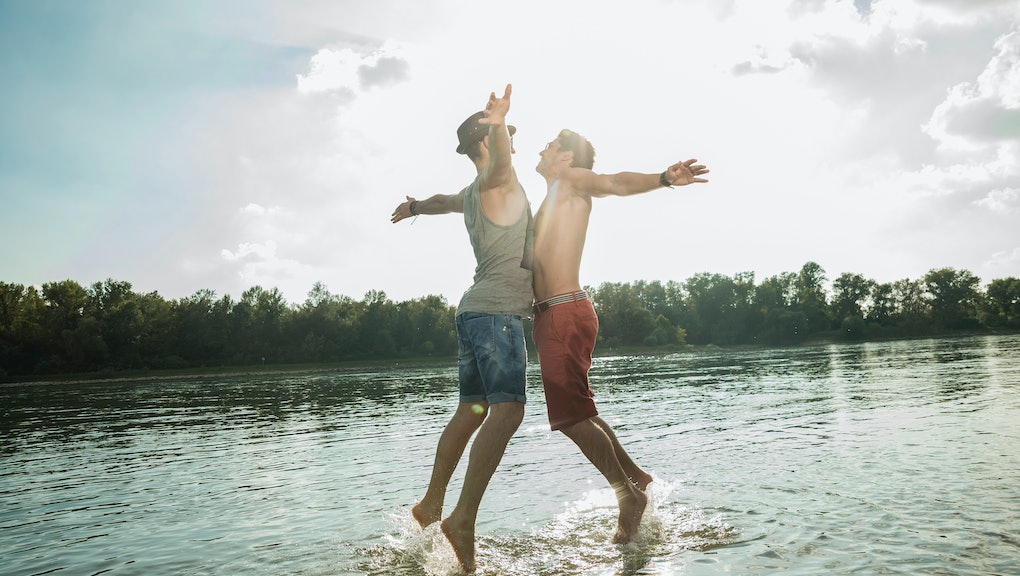 The Best Way to Handle Stress Could Be a Good Ol' Fashioned "Bromance," New Study Finds

Bromances: What are they good for?

Well, according to scientists studying rats in a University of California, Berkeley, laboratory, the answer is: stress relief!

At least that's the takeaway researchers came up with in a recent study that sought to examine the effects of dude-on-dude friendships on men's health. Cheers to bonding with your bros in the name of wellness!

For the study, researchers analyzed the behavior of male rats who shared cages in an effort to glean how the rats used their bonding to deal with stress. (Note: In rat-land, adding "stress" to the equation means infusing the cage with moderate amounts of "predator odor," aka the scent of an animal that wants to kill you.)

In other words, the male rats turned to each other to deal with their fears and anxieties! Awww. Males have feelings. Cute.

"A bromance can be a good thing," the study's lead author Elizabeth Kirby said in a press release. "Males are getting a bad rap when you look at animal models of social interactions, because they are assumed to be instinctively aggressive. But even rats can have a good cuddle — essentially a male-male bromance — to help recover from a bad day."

To maximize the stress-relieving benefits of a bromance, consider an all-male aerobics class! (This suggestion isn't in the study, but really it should be. Cardio is also a known stress reliever.)

Setting aside for a moment that the term "bromance" itself is kind of annoying in that it turns the concept of male friendship into a novelty and tries way too hard to be totally not gay, these findings do reiterate what has been suggested by past studies as well: that friendship is good for your health.

In the past, studies have linked friendship to everything from longer lifespans to improved brain function. So the fact that male rats were able to de-stress after a difficult experience by bonding with each other isn't exactly surprising. Whether it's male rat friendship or male human friendship, its powers are clearly effective.

Now, let's have a study on the health benefits of male-rat-on-human-male friendship, which was heartwarmingly depicted in the 2007 Disney and Pixar film Ratatouille.