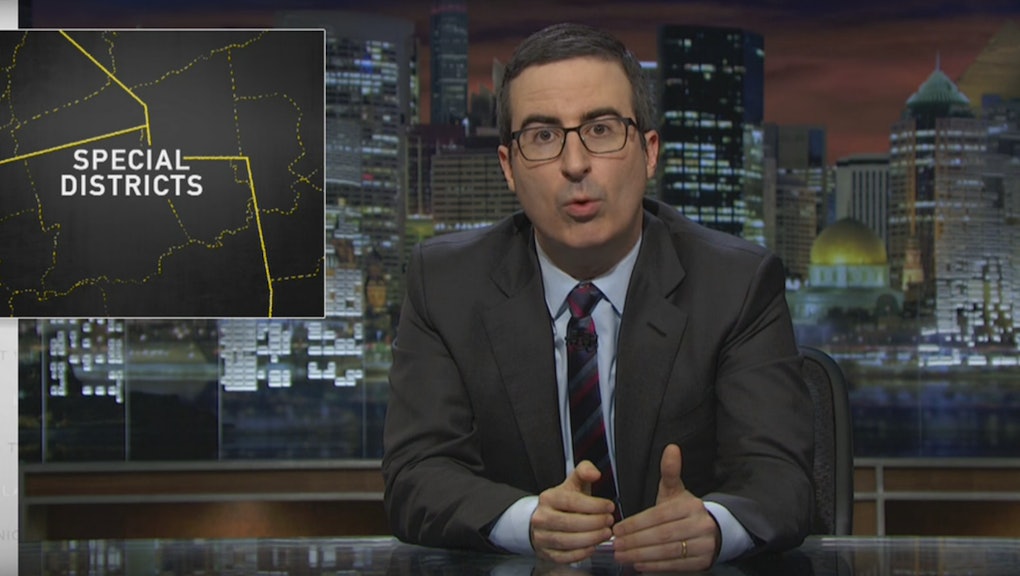 On Sunday's edition of Last Week Tonight, host John Oliver turned his sights from the Republican presidential primary to a small, arcane dimension of local politics.

Oliver tackled "one of the smallest and most obscure forms of government: special districts. That's right, tonight, we are talking about special taxing districts. So hello, people watching for the first time because of our Trump piece. And also, I presume, goodbye!"

But wait, departing viewers — this is important!

However dry they may sound, special tax districts, Oliver explained, are tax zones local governments set up to fund specific purposes, like fire and police departments or city services. There are roughly 40,000 across the U.S., they spend about $100 billion annually and many basically have no oversight.

It's a huge problem, and in many cases the public may not even know it exists.

"Think of a special district like a cult," Oliver said. "They can take your money and you may not even be aware that you are in one."

"It's a little weird in a country that talks so much about government accountability that a huge amount of our tax dollars go to fund entities that most of us know absolutely nothing about," he added.

Oliver noted that while some of these districts act scrupulously, others do not. He cited Isaacson Municipal Utility District in Texas, which billed residents for a consistent 13,721,200 gallons of water with seemingly no variation in use, adding "the only time the exact same amount of water should appear in a document year after year is in Shamu's rider. Yeah, Shamu gets 13.7 million gallons of water in his tank at all times and not a drop less, he's a fucking artist."

The Garrett Volunteer Fire Department in Kentucky, Oliver pointed out, spent a portion of more than $100,000 in improperly spent taxpayer money on flat-screen televisions, chewing tobacco and fireworks.

In Rhode Island, a fire district chief was caught drinking during the workday, as well as borrowing a public vehicle to drive to a party where he was filmed smoking marijuana. The chief later told local news station Target 12 it was a "cigar."

Nor are these districts accountable to voters. In one scenario in Conroe, Texas, Oliver said, local media shed light on a situation in which a land developer rented out a mobile home for the express purpose of conducting a one-family vote on $500 million in special district bonds. Nassau County on Long Island held a special district election every 10.9 business days, Oliver reported, some of which had just 1.8% turnout. None were on Election Day.

"Think about it," Oliver quipped. "It would be a bit of a red flag if someone in your neighborhood offered children candy every 11 days, but never on Halloween. It would give you pause for thought."

Even more alarming, a report in Kentucky found many such districts have no actual procedures to dissolve them.

"There's no way to break them up," he concluded. "They're like styrofoam packing peanuts or the enduring friendship of Jimmy Fallon and Justin Timberlake. They'll be with us until the end of time."