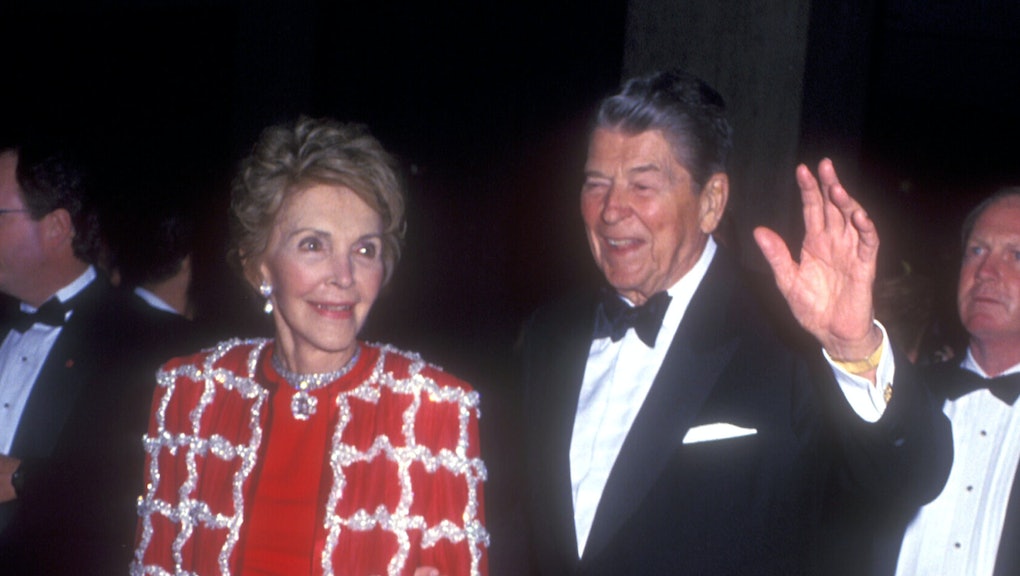 News broke on Sunday that former first lady Nancy Reagan died. She was a fiercely intelligent and trusted adviser to her husband Ronald Reagan. It's not hard to see that her legacy is one that will be remembered.

Especially by people of color, many of whom are still suffering because of it. Her rhetoric around drug use and her lack of response to the AIDS epidemic laid a nefarious trap for many communities of color. And it starts with a famous public service announcement.

In 1986, Nancy Reagan taped a PSA that contains three words that almost comprise her entire legacy: "Just say no."

"Our job is never easy because drug criminals are ingenious," she said. "They work every day to plot a new and better way to steal our children's lives, just as they've done by developing this new drug, crack. For every door that we close, they open a new door to death."

Reagan's PSA helped create a national movement against drugs in schools, which then coalesced into the 1986 Drug-Free Schools and Communities Act, which mandated "zero tolerance" policies for drugs in schools. This led to police officers on patrol in schools and the eventual reliance on arrests to discipline children, rather than detention or expulsion, creating what is now known as the "school-to-prison pipeline. "

The school-to-prison pipeline disproportionately affects black and Latino students. Black children make up 16% of students but 31% of in-school arrests.

"Young offenders who were incarcerated were a staggering 67% more likely to be in jail (again) by the age of 25 than similar young offenders who didn't go to prison," Think Progress wrote, citing a study conducted by researchers at Brown University and the Massachusetts Institute of Technology. "Moreover, a similar pattern held true for serious crimes. [The researchers] found that incarcerated youths were more likely to commit 'homicide, violent crime, property crime and drug crimes' than those that didn't serve time."

It's clear that the blueprints of these destructive policies and policies are still being wrestled with today. Talk of super-predators and mass incarceration dominate the 2016 election cycle. Democratic candidates Hillary Clinton and Bernie Sanders have come out against the over-policing of people who use drugs. Both candidates have spoken about the dangers of treating drug use and abuse as a criminal issue. Instead, it should be treated as a public health issue because of its connection to HIV.

Reagan's anti-drug PSA came out in 1986, five years after the New York Times' first report on what would later be called AIDS. President Reagan didn't give a speech on AIDS until 1987, six years after it was identified as a major public health issue. While President Reagan stayed mum on the issue, Nancy Reagan just said "no" to injection drug users: the same people who were at extreme risk for contracting HIV. By 1985, 17% of HIV infections were due to intravenous drug use.

It's no secret that the United States is currently in the throes of an opioid epidemic — one that is finally gaining attention now that it is affecting white Americans. PBS reported that data from the Centers for Disease Control and Prevention showed a 213% increase in deaths due to overdose among black people from 2010-2014 and a 137% increase among Latinos. However, heroin use is moving from an urban epidemic that affects people of color to one affecting white, rural communities, according to a study in JAMA Psychiatry.

In 2015, an HIV outbreak in southeast Indiana was directly tied to the heroin epidemic in the area. Even worse, the HIV outbreak happened right after the only HIV testing facility in the area — a local Planned Parenthood — was shut down due to state funding cuts. That outbreak, which mostly affected Indiana's white population, spurred a temporary needle exchange meant to save other heroin users from also being infected with HIV.

Nancy Reagan said "drug criminals" were "ingenious," but the same could be said of the blueprints that the Reagan administration made for the war on drugs and the lack of response to the AIDS epidemic. She may have made headlines for refusing help to actor Rock Hudson, but she also just said no to helping people of color who were fighting addiction. And though she may be a style icon — ironically, her favorite color is the color of the AIDS awareness ribbon — she deserves to be remembered for saying "no" to helping those living with HIV.