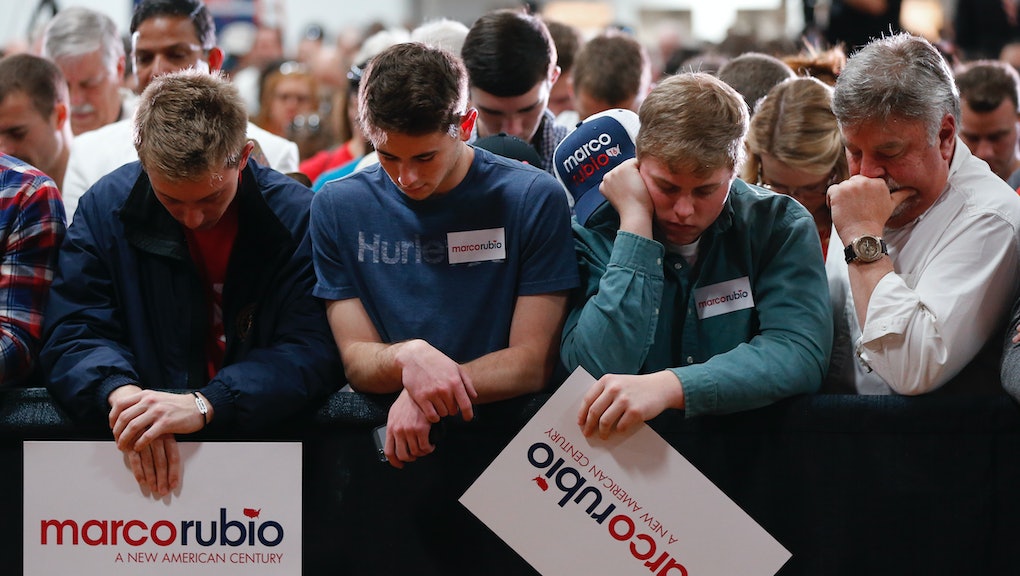 On paper, the notion of Marco Rubio as the Republican nominee for president made sense.

The Florida senator was supposed to be the new face of the Republican Party. He had an inspiring, made-for-TV-ads life story: A son of working class Cuban immigrants, Rubio fought his way through Florida state politics to the United States Senate. His struggles with student debt allowed him to speak personally about the price of getting ahead. Though young, his wife and four children grounded him and made him a family man who could speak about wanting a secure, prosperous future for his kids.

But now Rubio is reeling, and he finds himself far behind Donald Trump and Ted Cruz in the race for delegates. His campaign is making its last stand in Florida, but even a victory there would still leave him with a decidedly narrow path to the nomination, one that would involve a knock-down, drag-out fight on the floor of the convention.

When CNN reported Monday that the Rubio campaign was embroiled in an internal debate about whether to get out of the race before the Florida primary, based in part on sources' expectations of a weak Tuesday showing, campaign spokesman Alex Conant pushed back hard. He called the CNN story — which also described Rubio himself as still bullish on forging on — "utter nonsense" and "100% absolutely false," and forecasted "a new day on the campaign after we win Florida."

But, campaign denials notwithstanding, the delegate math remains the same. Without a come-from-behind victory on March 15, the senator's own Sunshine State could mean the sunset of his presidential ambitions.

A daunting climb ahead: Rubio's most passionate supporters saw a Republican Jack Kennedy, a scrappy man bursting with energy who could unite a fractured GOP — appealing to social conservatives while sending a message, in fluent Spanish if need be, that the Republican Party wasn't just for old white guys.

"What's great about Marco is this election is not just about the White House. This election is about the future of the Republican Party," Assemblywoman Nicole Malliotakis, Rubio's New York State chair, told Mic.

"[He is] someone who, because of his life experience, and his ethnicity and his youth, can grow our party and bring new people [who] have never voted before," said the 35-year-old lawmaker, herself the daughter of immigrants from Cuba and Greece.

Rubio has battled his way to the Final Four of the fight for the GOP nomination, staying in the race against frontrunner Donald Trump, fellow Sen. Ted Cruz and Ohio Gov. John Kasich.

But the losses have piled up. A pair of robotic stumbles made Rubio seem plastic in New Hampshire, where he finished fifth. Trump then won a decisive victory over him in South Carolina, despite Rubio's marquee endorsements from Gov. Nikki Haley, Sen. Tim Scott and Rep. Trey Gowdy. Rubio then finished a distant second in Nevada, where Trump ran up the score with his biggest victory at that point in the campaign.

Rubio won only one state on Super Tuesday, pulling out a victory in Minnesota. Under fire from Trump, Rubio went to the mat in Thursday's Republican debate. The ensuing verbal firefight degenerated into personal sniping about the size of hands and other things — and may have resulted in more damage to Rubio's image than his rival's.

On Super Saturday, Trump went on to victories in Louisiana and Kentucky while Cruz carried Kansas and Maine. Despite a final sprint on the stump, Rubio finished fourth in Maine and third everywhere else. Both Cruz and Trump called on him to quit. Rubio won Sunday's Puerto Rico primary, earning just his second victory to date.

Rubio's prospects for Tuesday, when voters head to the polls in Hawaii, Idaho, Michigan and Mississippi, aren't encouraging. Michigan is the biggest prize, and the latest surveys suggest Rubio may not even reach the 15% support threshold needed to score at-large delegates there.

Fight for Florida: Third or even fourth place finishes on Tuesday aren't going to provide the kind of adrenalin Rubio needs as he takes the fight to his home state, which votes in a week.

"I think he's in trouble in Florida," Daniel Smith, a political science professor at the University of Florida, told Mic.

Smith notes that Rubio won his Senate seat in a three-way 2009 race without capturing a majority of the vote, "So it's not like his statewide base is extensive, nor deep, and the fact of the matter is that we had quite a bit of the party establishment behind Jeb Bush."

Bush, the former Florida governor and the brother and son of Presidents George W. and George H. W., suspended his campaign after an underwhelming finish in South Carolina.

But thanks to state laws that allow voting well before the physical polls open, Smith said, "Many people actually cast ballots when Jeb Bush was still in the running here in Florida, and you can't take those back — and I think we just have not seen a presence of a ground game here in this must-win state for Marco Rubio."

Importantly, Smith noted, about a third of voters under 30 in Florida are not registered with a party — so they can't vote in the closed primary.

While Florida's Latino population isn't just limited to people of Cuban heritage in the Miami-Dade area — the Puerto Rican population is growing fast around Orlando, for example — Smith says many of those voters are also either not members of a party or are registered as Democrats.

The upshot: Among Florida's young and Latino voters, "There may be an anti-Trump sentiment," Smith said, "but it's not going to be expressed in the primary."

"You've got to win Florida": From a primary standpoint, the second-place finisher in the Sunshine State really is the first-place loser. Unlike other states, Florida will award its 99 delegates on a winner-take-all basis, not proportionally.

Losing Florida would be a humiliating blow to Rubio. He would still have delegates in his column, but showing the party and nation that even his own state prefers another candidate could spook donors and bring his entire rationale into question.

The freshest Florida polls, including one released Monday by Monmouth University, do have some good news for Rubio. The senator trailed Trump by just eight percentage points — a better showing for Rubio than in a Feb. 25 Quinnipiac poll that had him lagging by double digits. Rubio outdid Trump in south Florida and trailed him more closely in the north than statewide.

Rubio's "getting creamed in central Florida, and it looks like Ted Cruz is going to spend a lot of money in central Florida to keep those numbers down," Monmouth's Patrick Murray told Mic. "He's looking to get Rubio out of the race as quickly as possible."

It's also possible, Murray said, that Rubio's message is unhelpfully muddy: "He doesn't have a clear identity because he's being sold as the establishment candidate, but he's a favorite among social conservatives as well."

So Rubio, Brown told Mic, "has been left running as a moderate — but an awkward moderate, given how strongly he allied himself with the Tea Party just six years ago."

Low road peril: Yes, Rubio did "get Trump to reference his genitalia" in the last debate, which Murray said "turned off some people" and illustrated "why you actually have to go down to Trump's level" to really set him off and inflict damage.

Rubio will have to walk the Trump-Cruz tightrope again when the GOP candidates face off Thursday for their next debate in Miami.

But first, on Wednesday, Rubio will take center stage — without his competitors — in a town hall forum sponsored by MSNBC at Florida International University. During that hour of questioning, the Floridian may have his best chance to make his case to his state, his party and his country.

If he doesn't prevail on Tuesday, despite his insistence that he's committed to the fight, Rubio might have to face the stinging reality that this quest for the White House will end in Florida, where it all began.