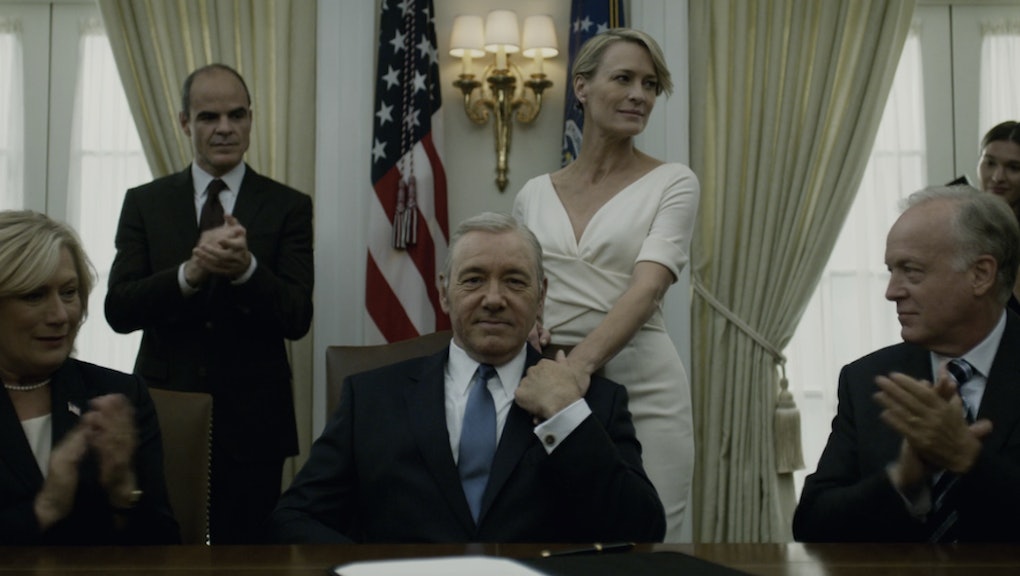 Behind every powerful man is an intelligent and even more powerful woman, controlling all major decisions and maintaining world order. This is (at least) true and ever-apparent for Frank Underwood and his wife, Claire Underwood, in the fourth season of House of Cards, in which fans are given an even deeper look inside the fictional president's crumbling relationship with the first lady.

Though the main plot of the Netflix original's latest season centers around Frank Underwood's presidential campaign against New York Governor Will Conway, it's the show's cast of fearless women who helm the lead in international negotiations, solving global crises, securing elections and even cleaning up after the messes their male counterparts are causing worldwide.

"What would you be without your husband? Nothing, a pretty face," Russian president Viktor Petrov scorns Claire when she attempts to negotiate privately with him during an international summit in Germany. "Your people are hurting. Six months at most, they're going to be marching on Red Square," Claire responds. "I'm done letting you have your dignity. The truth is, you're a beggar, on your knees, and you will take whatever we shove down your throat."

"Viktor," she continues, addressing the reckless totalitarian president by his first name. "Take the deal. Get your dignity back." Shortly after, Claire leaves the negotiation room, greeting Secretary of State Catherine Durant with the deal, finally approved by the Russian government. All thanks to her.

Claire isn't the only one. Her ruthless sense of leadership from behind-the-scenes is part of a much broader theme throughout the fourth season of House of Cards. The first lady assists President Underwood and even acting President Blithe — though, he's mostly a figurehead for her agenda —  but she isn't the only woman working to bolster American leadership.

In fact, Claire recruits political strategist, Leann Harvey (played by Neve Campbell), to assist in some of her career endeavors. Harvey quickly becomes a powerful staple in the White House's affairs.

"It's nice, as a 42-year-old woman in this industry to get a character who is unapologetic and strong and not a victim," Campbell told USA Today ahead of season four's release on the streaming service. "This season is very focused on the equal strength between Claire and Frank, and seeing them go head-to-head ... It's great to see writers putting women in Hollywood in a really fantastic light."

House of Cards places thinly veiled references to dozens of contemporary issues in each season: mental health, gun control, international relations and political polarization. Even Petrov and his disillusioned view of the United States is a direct correlation to Russian President Vladimir Putin.

But when it comes to gender equality, the fourth season of House of Cards drives the point home that men might typically hold the highest positions of power, but it doesn't have to be that way. The first lady being the only American, man or woman, to reach a deal with the Russian president is symbolic of the growth of Wright's character, as well as all women in society, finding their steel.

And it's just a matter of time before she's even closer to the presidency.