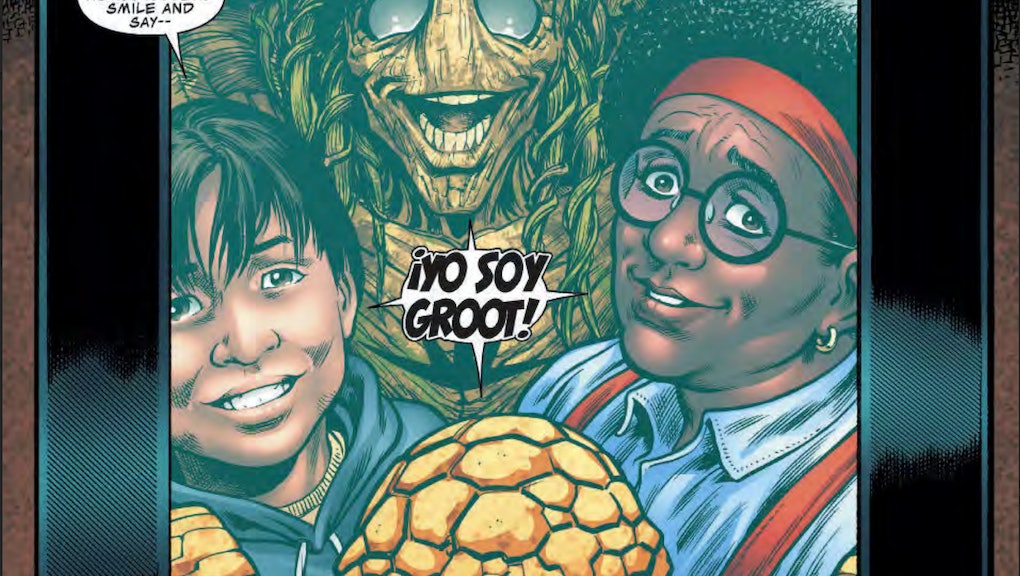 "I am Groot." With these three words, an intergalactic tree entered the hearts of millions.

The character, from the 2014 action film Guardians of the Galaxy, is now the star of a new comic, Guardians of the Infinity 3, which shows Groot pairing up with the Fantastic Four's Thing to defeat a foe in New York City. We end up learning a lot more about the ancestral roots of this tree.

Edgardo Miranda-Rodriguez, the comic's writer, made everyone's favorite anthropomorphic tree Puerto Rican. In the story, Groot and Thing are attacked by Plantman, who possesses Groot and turns him against Thing. The only person able to save Groot is a Puerto Rican abuela named Estela. She teaches Groot that he is a descendant of the Taino, an indigenous tribe with Puerto Rican roots and that his ancestors reside inside of him.

Jack Kirby created Thing to reflect his experience being raised in the historically Jewish enclave of New York City's Lower East Side. He is also based on an old Jewish myth: the golem.

Miranda-Rodriguez researched the ceiba tree as the model of what Groot would become. The ceiba is full of meaning for Puerto Ricans and many other Latino cultures.

The ceiba tree is the national tree of Puerto Rico and was very important to the Taíno.

In the comic, Taíno masks — called vejigantes — cover the walls of Abuela Estela's restaurant, along with pictures of the famous ceiba tree. Miranda-Rodriguez didn't pick these items at random: Some of his closest advisers on the comic book were Puerto Rican cultural historians.

For help, Miranda-Rodriguez turned to Dr. Marta Moreno Vega, the president and founder of the Caribbean Cultural Center. In fact, Vega turned out to be the inspiration for the comic's true hero, Abuela Estela.

The conversation about Groot's Taino heritage between the dark-skinned grandmother and the light-skinned grandson has proven to be the most resonant with readers, according to Miranda-Rodriguez.

"People are saying, 'That's me, that's how my family is,' and 'It's amazing to see the word Taíno written in a comic book," Miranda-Rodriguez said. But he didn't add that page to appeal to readers; he did it because he wanted the story to reflect his own experiences.

"How great would it be if a Puerto Rican was able to write and reflect the New York City that I grew up in?" he said.

Miranda-Rodriguez said that response to the book was directly correlated to how much Latinos wanted to see themselves represented in stories.

"When we're not represented in stories, there's a part of us that dies a little bit," he said. "We grew up watching certain sitcoms and they didn't include or represent us. And now whenever there's a little inkling of a character that has a likeness to us, it excites us."

But, he said, this wasn't about mere representation or tokenizing.

"As opposed to a character just saying 'Wepa!' there was a moment of substance I was able to tie in," he said. "It's not a book about Puerto Ricans or Taínos. It's a book about a giant guy made of rocks and a giant tree that says 'I am Groot,' but I wanted to show that the city looks like us because we are the city."

Miranda-Rodriguez really wanted Abuela Estela to reflect the importance of women in Latino culture. In fact, when Groot is possessed by the story's villain, it is Abuela Estela who saves the day.

Miranda-Rodriguez spoke about the many Latinos who grew up with both parents in the workforce and how that often translated to abuelas raising children. When college was stressing him out, Miranda-Rodriguez said he would sing the hymns, or coritos, that his grandmother had taught him. It's one of many anecdotes he recalled about abuelas in Latino families.

"You can do a case study of grandmothers walking into the street to break up fights!" Miranda-Rodriguez said. "They raised us with an old-school value system that can be antiquated, but we have a lot of connections to the old world that keep us grounded because of that."

And in many ways, Miranda-Rodriguez's story is about that: the collaboration of old and new generations. Miranda-Rodriguez, a new father, said that the abuelas of the world are getting older and passing away and that Latinos are scared that their culture may not be passed down. Miranda-Rodriguez and his art hope to keep that culture alive. Everything he does, he said, is so that children who read his comics can feel connected to a larger community.

"I saw the power of building up a child's self-esteem, and I wanted to do that with history and knowledge," he said. "[The stories abuelas tell us] empowered children to grow up to be adults that would contribute in their own way to society."

Now, it seems, Miranda-Rodriguez has helped do the work of all the abuelas of the world: by passing on old-world culture to young, Latino comic book readers.