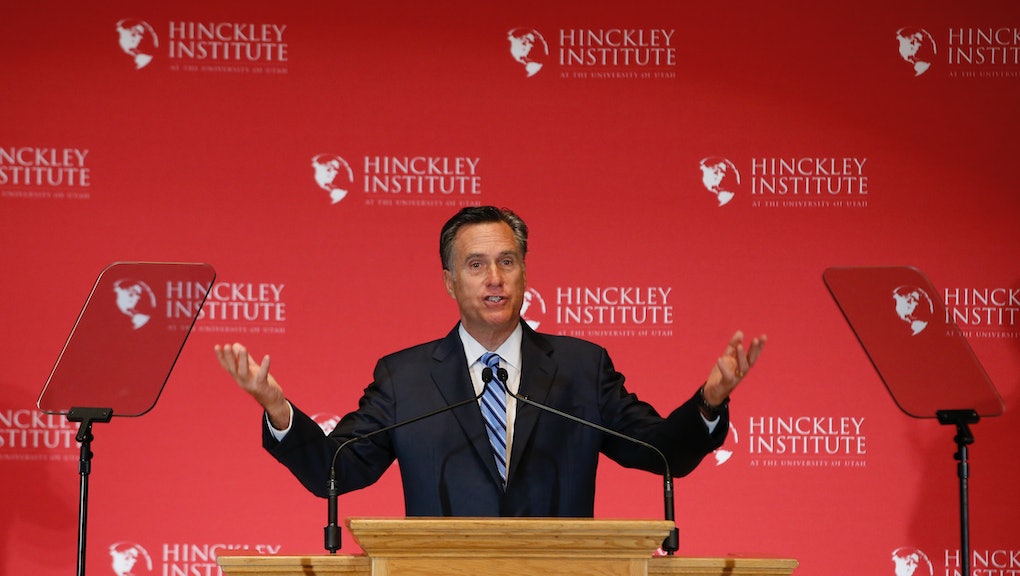 Mitt Romney Could Run for President — Technically. But Will He?

Mitt Romney has made no bones about the fact that he has a problem with Donald Trump, currently the preeminent contender for the Republican party's presidential nomination. Now, voters are wondering if Romney's unequivocal condemnation of The Donald might serve as a segue into his own campaign.

"I'm not here to announce my candidacy for office," the 2012 Republican nominee said on March 3, hours before the 11th GOP debate began, opening a speech in which he called Trump "a phony, a fraud," denouncing "the bullying, the greed, the showing off, the misogyny, the absurd third grade theatrics" the businessman has used to get ahead.

The censure, some said, came too late; can the same be said of a Romney 2016 candidacy? On Jan. 30, Romney for President, Inc., filed papers with the FEC; those papers — which designate his 2012 running mate, current House Speaker Paul Ryan, as the vice presidential choice — are now making the rounds on Twitter.

That doesn't have to mean anything, but it could; the window hasn't yet closed on Romney's candidacy. Think Progress broke down the series of events that would have to take place in order for the GOP to select Romney at its national convention in July. The most substantial of those is a contested, or brokered, convention.

What does that mean? It means none of the candidates currently in the offing manage to win the 1,237 delegates it takes to win the Republican party's nomination. Should that be the case, the contenders will begin bargaining, attempting to sway delegates to their campaigns. In that situation, if Trump failed to demonstrate his artistry in deal-making and the convention remained at a standstill, then the party could look to other options, Romney being one of them.

However, according to Think Progress, the party would have to revise its rule that the nominee must have won eight states in the primaries in order to qualify for its candidacy. The GOP could do this, but when one considers that Trump's popularity seems to stem from Republican reticence to elect another establishment leader, wiping the slate clean only to write "ROMNEY" on it in enormous letters could be a questionable move.

And yet, as Think Progress reported, it's one to which Romney wouldn't necessarily be averse. On Sunday, when Chuck Todd of NBC's Meet the Press asked the former Massachusetts governor whether or not he would accept the nomination, he said that he doubted the possibility and didn't intend to run, but, "I don't think anyone in our party should say, 'Oh no, even if the people in the party wanted me to be the president I would say no to it.' No one's going to say that."