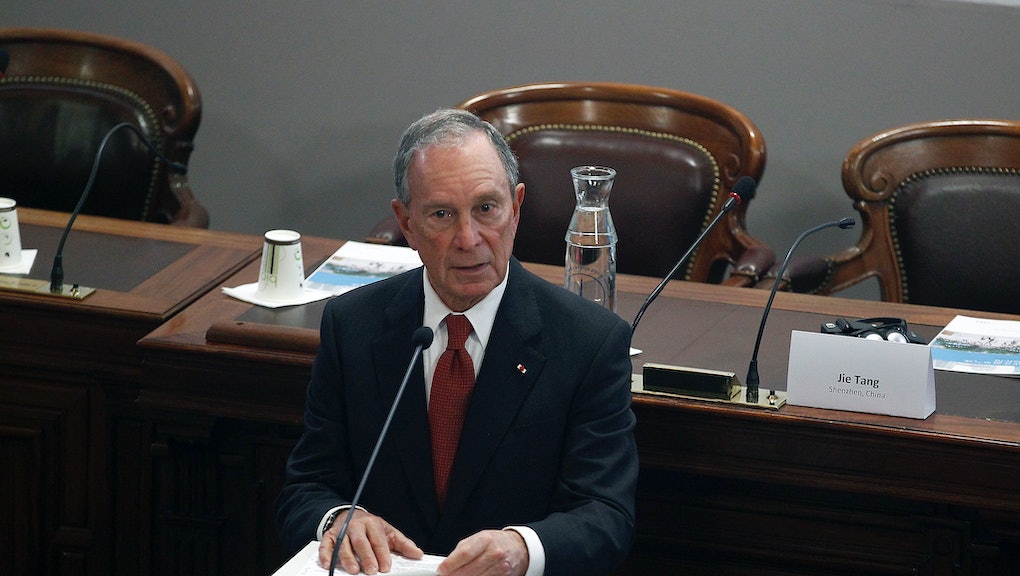 Following weeks of speculation, former New York City Mayor Michael Bloomberg announced Monday that he would not mount an independent bid for the presidency.

Citing the obstacles that would have confronted a run outside the two-party system, the socially liberal, fiscally moderate media and financial services mogul said he feared that his bid would have guaranteed the election of a hard-right Republican like Sen. Ted Cruz of Texas or businessman Donald Trump.

"As the race stands now, with Republicans in charge of both Houses, there is a good chance that my candidacy could lead to the election of Donald Trump or Senator Ted Cruz," Bloomberg wrote on Bloomberg View. "That is not a risk I can take in good conscience."

Bloomberg was particularly scathing in his assessment of Trump, a fellow Manhattan billionaire whose often-inflammatory campaign has alienated many establishment-minded figures.

"I have known Mr. Trump casually for many years, and we have always been on friendly terms. I even agreed to appear on The Apprentice  — twice. But he has run the most divisive and demagogic presidential campaign I can remember, preying on people's prejudices and fears," he wrote. "Abraham Lincoln, the father of the Republican Party, appealed to our 'better angels.' Trump appeals to our worst impulses."

The background: Long a registered Democrat, Bloomberg bypassed the crowded Democratic primary field to run for mayor of New York as a Republican in 2001, narrowly edging opponent Mark Green that November. He went on to serve two more terms in office, but he eyed the presidency as the ultimate prize.

After bolting from the GOP in 2007, Bloomberg stoked chatter that he would wage an independent candidacy in 2008. While he downplayed that possibility at the time, he seriously assessed a candidacy before concluding that the hurdles facing such a run would have likely proven insurmountable. A similar calculation led him to pass on a 2012 campaign.

This time, he thought, it could have been different. With the insurgent candidacies of Democratic hopeful Bernie Sanders and Republicans Trump and Cruz pulling the two parties in polar directions, Bloomberg thought there may have been an opening for a pragmatic centrist with his blend of cultural liberalism and pro-business economics. But with Clinton likely to prevail in the Democratic nomination process, the opening was quickly closing.

What could have been: Offering a glimpse at what a Bloomberg campaign would have looked like, the former mayor lamented the "corrupt gridlock" plaguing the two parties during a recent party for former Reagan speechwriter Peggy Noonan.

Bloomberg's preparations for a bid were serious. The Times reported Monday that his team polled 22 states, established campaign offices in Texas and North Carolina, prepared a website and made TV ads touting his credentials as a budget-balancing businessman:

But polling showed his bid would have been an uphill fight, one that even his nearly $42 billion net worth may not have been able to overcome.

While the 74-year-old Bloomberg is virtually certain never to seek the nation's highest office, he wrote Monday that he plans to remain active in the political arena. He vowed not to "stay silent about the threat that partisan extremism poses to our nation."

"I am not ready to endorse any candidate, but I will continue urging all voters to reject divisive appeals and demanding that candidates offer intelligent, specific and realistic ideas for bridging divides, solving problems and giving us the honest and capable government we deserve," he wrote.