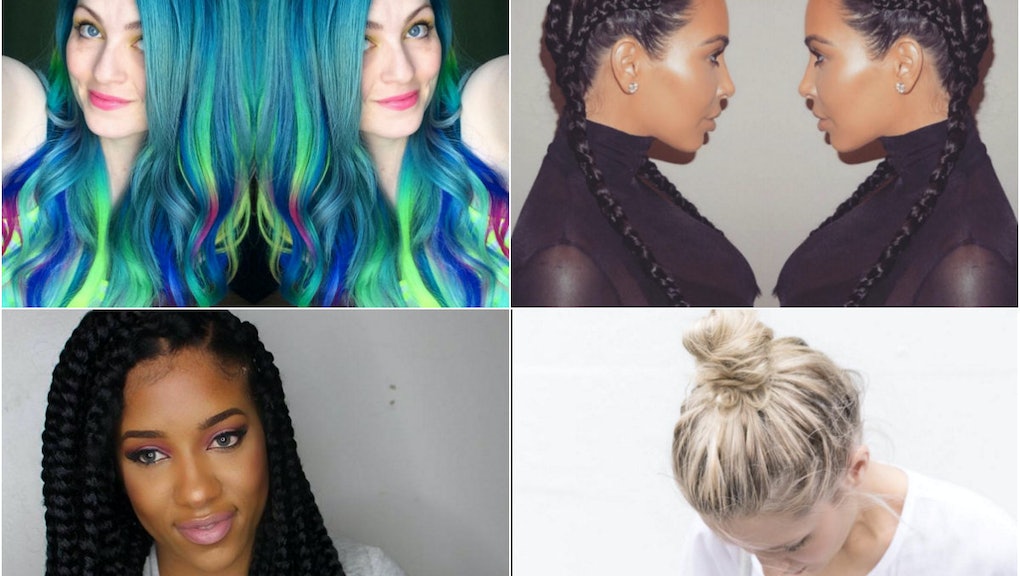 A Brief Guide to 'Hair Theory,' the One Thing That Holds All Female Friendships Together

We were sitting around at a nondescript Irish pub in downtown New York City. The conversation up until that moment had been generally lively and intelligent, meandering from job problems to significant others to politics. But now, here we were, a bunch of intelligent young adult women, talking about our hair.

This time, the conversation was about hair length: one friend asked the group whether she should cut off a few inches. Each of us quickly chimed in with our own comments — whether we liked hers at its current length, if we were also considering a chop, how dead our split ends were, whether we should give ombre another go. The discussion was brief, but it was one we'd had before — pretty much any time we got together.

Call it the Unified Hair Theory: I have a theory that if a group of female friends is having a conversation, whether it be a lengthy catchup with old high school friends or a post-work drinks with our besties, at some point the talk will inevitably turn to hair.

Don't believe me? Observe next time you're in a group of women, and see who either compliments someone's hair, or makes a rhetorical observation of their own, first.

"Your color is great, where did you get it done?"

"Ugh, it's getting so long, I'm thinking I should cut it."

While this might sound a tad sexist on the surface, this inevitable turn of the conversation is not a bad thing, by any means. Women's fixation on their hair has often been unfairly equated with superficiality or immaturity: the ditzy girl twisting her hair while she talks, or the young female boss (or princess) nervously running her hands through her hair before a group.

But women's frequent talk of hair isn't a reflection of their vapidity, nor is it necessarily about the speakers' lack of deep connection with one another. Rather, hair is one of the rare things in life that is relatively universal. Talking about hair is actually talking about identity, using a language that's easily translatable.

Hair is one of the most obviously visible parts of a person's appearance. It's one of the things a person notices about you before they notice literally anything else.

"Hair occupies this very unusual category on the body: people are not averse to talking casually about one another's hair, though they would never criticize someone's weight or their nose, perhaps because hair can be changed so easily." Elizabeth Benedict, editor of Me, My Hair and I: Twenty-seven Women Untangle an Obsession, told Mic.

Hair is about ethnicity and race and cultural heritage. As Mazuba Haanyama writes for the Feminist Wire, "A conversation about hair cannot be divorced from integrated understandings of the body: racialized, classed and gendered bodies, with adornments, perceptions of beauty, and contextual analyses of place and time."

For that reason, hair can feel like a battlefield: a site of pride, but also one of confrontation. We see that in the growing conversation about natural hair among women of color, from Amandla Stenberg, who told Teen Vogue, "when I started wearing it natural, it felt like I was blossoming because I was letting go of all the dead hair and all the parts of me that had rejected my natural state," to dreadlocked Miss Jamaica.

Hair is also about choosing whether you want to stand out (just ask any woman who's ever shaved her head), or blend in. It's about deciding to spend tons of money to go platinum blonde, or deciding to let go and give zero fucks by going grey.

As such, hair is deeply personal. Maintaining it can be a joy (is there anything more purely satisfying than a fresh cut?). But hair can also be a source of insecurity, of wanting to have something you don't or be someone you're not.

"Women talk often about ... how unsatisfied they are with their hair: it's too curly, too straight, or there isn't enough of it," said Benedict. "They talk about how they have made their peace with it — or haven't."

And yet, even though our relationship with our hair is deeply personal, it's still something that ties so many of us together, to connect over and find common ground.

Which brings us back to friendship. Hair is at the entryway of female connection. It's a safe topic of conversation when the person sitting across from you is a total stranger, but it's also a good subject to turn to when your best friend just needs to talk. It's unfailingly reliable, a topic that brings us together no matter what the situation.

Which is why we'll never stop talking about hair, with women we've just met but also the women we've known forever. We'll solicit advice, dole out compliments, praise each other's longingly and bitch about our own. Hair is our reliable connector and our entryway to dig deeper — a conversation that never gets old, never gets boring and never stops growing.