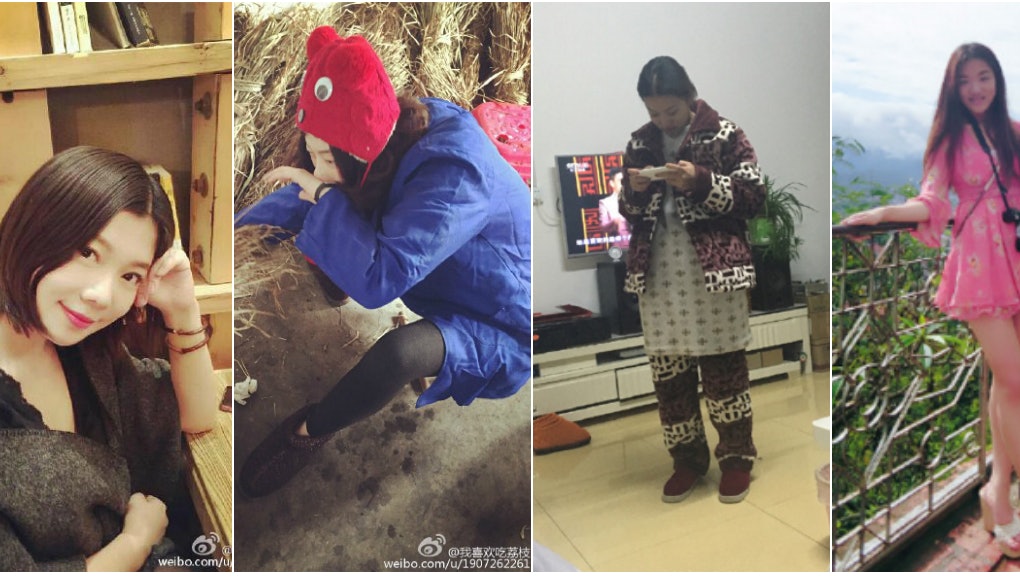 Before and after photos are a mainstay of social media, highlighting the power of everything from contouring to CrossFit. But recently in China, social media users have been gripped by a different kind of transformation, where "after" is a lot more low-key than "before."

The trend took off during Chinese New Year in February, when China's over 168 million migrant workers left their city jobs for the annual exodus to see their families in the countryside.

These images, often paired with light-hearted captions sprinkled with emoticons, aren't standard #LazyGirl fare. They're incredibly powerful, as they lift the lid on China's entrenched urban-rural divide — and challenge the inequality and discrimination that have gone along with it.

"The social media trend illustrates the divide between incomes, demographics and lifestyles between China's cities and villages," Mark Tanner, managing director of marketing and research agency China Skinny, told Mic. "Urban Chinese earn more than three times what their peers earn in the countryside, so many have the disposable income to make discretionary purchases such as fashion."

The women who ditch the countryside for the bright lights have to navigate two identities: one down-to-earth and homely, another polished and professional. Clothes are the perfect medium for them to do this.

Urban pressure: Millions of migrants have upped sticks for the megacities like Beijing and Shanghai as part of the biggest migration in human history following China's economic reforms in the 1970s and '80s. But life in these metropolises is hard: Each are home to more than 20 million people, and newcomers face prejudice and pressure to alter their appearance to fit in and get ahead in the job market.

"A woman who appears (sounds, acts and looks) more professional, educated and/or attractive and citified will have more job prospects open to her than just manual labor typical of farmers/migrants," Arianne Gaetano, assistant professor of anthropology at Auburn University and author of Out to Work, a book about Chinese migrant women, told Mic via email. "And, she might not be subjected to the overt prejudice shown to rural migrants by urbanites."

While men are also under pressure to fit in, women's appearances are particularly under scrutiny in the city. With job ads even specifying age and height for women, "beauty is capital," so it's said, and competition to look good is cutthroat.

Sophisticated urbanites refer to those from the provinces as waidiren, or "people from outside." Migrants can be looked down on for their unrefined habits, with stories circulating on social media about outsiders not paying their subway fares or spitting and shouting in public.

But discrimination goes beyond simple snobbery. China's hukou, or household registration, system ties citizens to their birthplace, denying them full access to social services like education and health care if they move to the city. The system is undergoing reform, but decades of separation have created an urban underclass not officially recognized in their new homes.

Where fashion comes into play: "Changing costumes is much easier. It is more difficult to overcome the 'invisible' barriers — such as speaking Mandarin or getting into the urban guanxi (connections) network," Nana Zhang, a lecturer in sociology at Southampton University, told Mic.

"Clothes definitely play a very important part in identity creation for migrants, especially the younger generation. In the early days, back three decades, it was really easy to tell who is a rural migrant in the streets or buses in Beijing. Now it is a different story for many."

Indeed, while migrants have been mocked for their unfashionable way of dressing or for joining migrant-specific subcultures like shamate, which favors spiky hair and body piercings, things are starting to change.

"The 'before' photos are like that because when you're away from home, you have to care about your appearance — it's a dog eat dog world out there," said one Weibo user, commenting on the "transformation" photos on social media. "Other people look amazing, and you feel the need to make an effort to dress up so you don't lose out to them and feel bad about yourself."

Hometown makeovers: But mastering a shiny new urban identity isn't enough for all of China's migrants, who must shed some of their newfound sheen to slot back into their old roles when they return to the village.

"These women posting selfies are very aware of how they must cautiously and ingeniously navigate between their autonomous desires and goals (pursued by living away from the village) and the rules of their conservative upbringings, including social reciprocity (fulfilling one's filial roles) and gender, in order to belong to two different worlds," Auburn's Gaetano said.

Gaetano said when she visited rural areas during Chinese New Year, migrant workers would pose in traditional roles such as fetching water from a well, behavior that was both knowingly jokey and a real attempt to fit back in to their old communities.

"Actually dressing 'down' indicated they were going to get dirty and do some of the farm work alongside their elders... this was appreciated by their kin who jokingly said things like, 'Oh, you are still such a hick.'"

Being at home with family also gives city dwellers a break from the pressure to look their best, with one noting, "Home, where you can relax and be ugly."

What is refreshing and unusual about these photographs, though, is that migrant women aren't restricting their rural identities to their hometowns but sharing them with their urban acquaintances through social media. It's showcasing an ability to not only embrace more than one kind of personal style, but also to be honest on social media, not sugarcoating the less glamorous side of their lives.

While clothes alone might not close China's rural-urban divide, they might not be such a bad place to start.