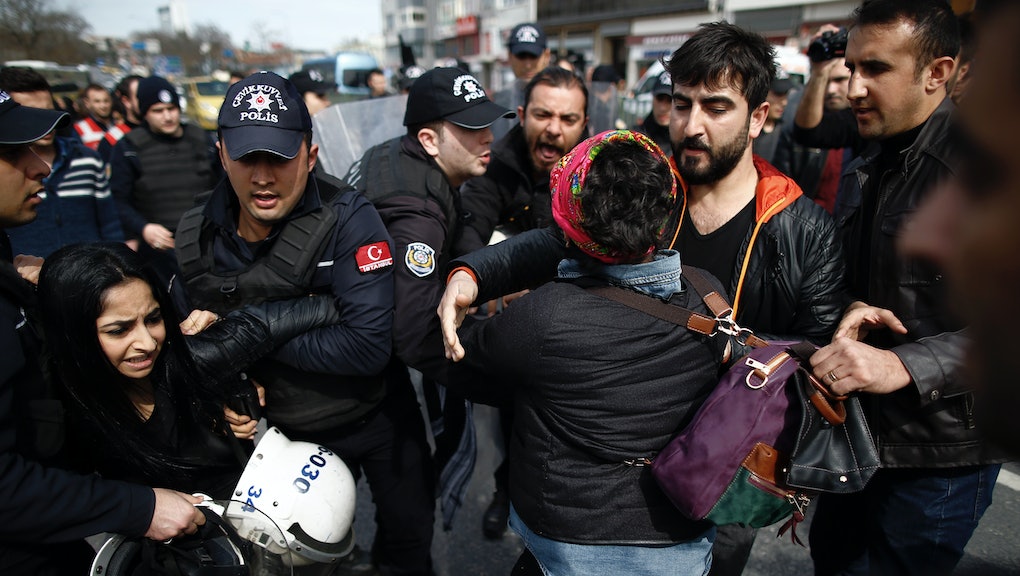 International Women's Day should be a time to commemorate women's past achievements and support those yet to come. The Turkish police not only failed to get the memo, but took the entirely opposite approach. On Sunday, officers in Istanbul fired rubber bullets at a crowd of hundreds demonstrating in honor of the day and detained at least one, according to Reuters.

Although the Turkish government had issued a ban on marching in support of International Women's Day due to "safety concerns," hundreds of women gathered in the Kadikoy district on March 6, carrying purple banners in honor of the international women's movement.

"We have always said that we would never leave the streets for the [Women's Day] demonstrations and we never will," one demonstrator, Guris Ozen, said of the efforts, according to the International Business Times. "Neither the police nor the government can stop us."

Despite the apparently peaceful protest, however, police infiltrated their assembly, shoving participants before opening fire with rubber bullets, Reuters reported.

Yet Turkish women have plenty of reasons to protest. Human rights groups have noted a notable rise in violence against women since the current president, Recep Tayyip Erdogan — who has notably stated women are not equal to men — took office, the BBC reported in 2015. A 2015 report found that 40% of women in Turkey experience domestic violence, according to the Clarion Project, and the country ranked 130th in the Global Economic Forum's 2015 Gender Gap Index.

But the resistance these protesters faced is perhaps unsurprising given restrictions on the right to assembly that have been prevalent for over a decade in the country. In August, Turkey's interior ministry issued a new decree that grants government officials the authority to ban demonstrations, should they appear to present danger, and requires civilians to gain permission of authorities to protest at all, according to the Hurriyet Daily News.

These restrictions will hardly dissuade Turkish women from advocating for justice on International Women's Day or any other day.

"You see the power of women," Ozen said. "We are here despite every obstacle, and we will continue to fight for our cause."