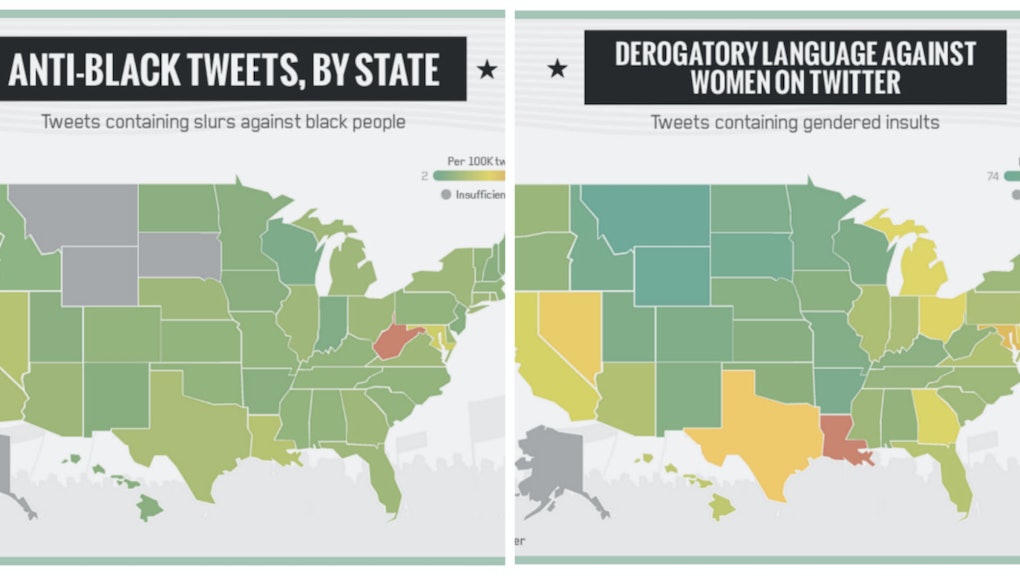 Here's How Homophobic, Sexist and Racist Each US State Really Is

When looking for a place to live, you might consider a neighborhood's safety, its school system or its proximity to loved ones.

But what about considering whether you're moving to a place that might be full of racism, sexism, transphobia, homophobia, ableism and body-shaming?

Real estate site Abodo conducted nationwide research by combing through tweets sent from June 2014 to December 2015, in order to find out which states and cities harbor the highest rates of prejudice against various groups.

Being near black and Latino people doesn't decrease racism.

One thing is clear: Most of the cities with high anti-black sentiment are areas with high black populations. Baltimore is 64% black, Atlanta is 61% black, New Orleans is 60% black and just over half of Newark's population is black.

The number of anti-Latino tweets is much lower, but follows the same basic principle: Just because different races live near each other, doesn't mean there's less racism. The city with the highest number of anti-Latino tweets, Bakersfield, California, has a 45% Hispanic or Latino population. Chula Vista, California, is 58% Latino, while Modesto, California, is about 35% Latino. Fontana, the fourth city on the list, has a 67% Latino population.

When it comes to prejudice online, no group is more hated than women.

Abodo produced two heat maps for derogatory language against women: One uses all the search terms ("bitch," "twat" and "cunt") while one map excludes the word "bitch," which makes for a drastically different map.

But the numbers are even worse when broken down by city.

Everyone hates gay and trans people.

Abodo didn't have an anti-gay tweet map of the United States, but many of these tweets come from traditionally conservative states or regions: Texas, Louisiana and upstate New York. However, most of the cities in California are in either moderate or highly liberal areas.

The number of homophobic tweets — indicated by uses of hate language like "fag," "dyke" or "lesbo" — is definitely not as high as the number of sexist tweets, but still higher than anti-black and anti-Latino tweets.

Abodo also found out how people feel about people with disabilities.

When Abodo looked for words related to mental and physical ability, like "retard" or "retarded," Nevada once again came in first with 16.4 tweets per 100,000 using one of the two words, followed with Ohio, which had 14.1 tweets per 100,000.

And people of size also faced a lot of discrimination.

Searching for terms like "fattie," "fatso" or "fatass" showed that 91.6 per 100,000 tweets in Louisiana included one of those three terms. Louisiana, by coincidence, has the fourth highest rate of obesity in the U.S. — 34.9% of its adults are obese.

Louisiana, Georgia, Texas and California all definitely put up a good fight when it comes to having some of the most offensive tweets. Of course, California is two or three times the size of some other states and some regions may score a little worse than others.

It's not clear with any of these maps whether people were using the terms to describe others or themselves. If you head over to Abodo, you can see even more maps, including which states were the most tolerant.