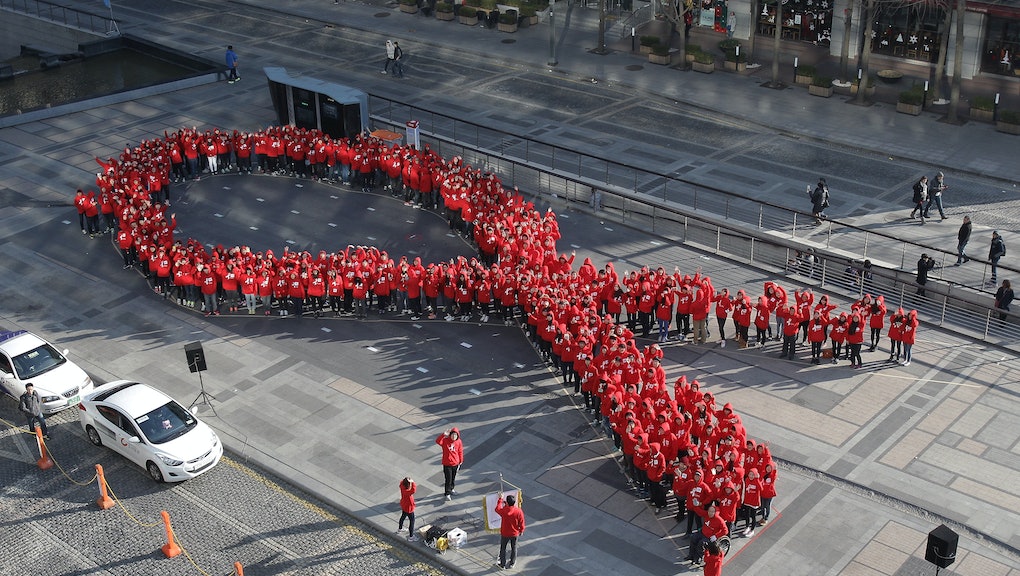 Decades after the 1980s, HIV and AIDS are better understood, but far from stigma-free. Despite the strides science has made in HIV and AIDS research, too few people know the facts of either.

And yet, a battery of new treatment options have completely changed the day-to-day reality of life with HIV. Worldwide, 35 million people were HIV-positive at the end of 2013, according to the World Health Organization (WHO). Whereas an HIV diagnosis 30 years ago may have been akin to a death sentence, these days, living with the virus means nothing less than living.

To be clear, that doesn't mean HIV and AIDS aren't serious conditions — they are, and they affect everyone, not just a handful of individuals. That's why everyone should understand exactly what an HIV diagnosis means, why it doesn't need to be a barrier to future relationships and how it can be prevented. Here are some of the typical misconceptions about HIV and AIDS, explained.

Read more: These Honest Sex Ed Videos Perfectly Demonstrate How We Should Be Teaching Kids About Sex

HIV is not the same as AIDS, and an HIV diagnosis does not mean the patient will necessarily develop AIDS. The V in HIV stands for virus, in this case, one that breaks down the immune system until it's no longer functional.

Modern treatment, however, can — and in many cases, does — keep HIV from wearing down the immune system to the point that it can no longer fight off infection, which is the point at which AIDS, an acquired syndrome, develops.

One reason it's important to get tested regularly is that the earlier HIV is detected, the earlier a patient can start treatment, thereby lowering their risk of getting AIDS. Anyone who may have been exposed to the virus should be tested at least three months after the fact, which is when HIV test results are typically most accurate.

Exposure does not equal transmission, though. That's no reason to skip the HIV test, but it's important to note that different exposure scenarios are associated with different statistical likelihoods of HIV infection, and only receiving a transfusion of HIV-positive blood comes close to a guaranteed transmission. The way we pass along the virus, however, is commonly misunderstood.

HIV is not transmitted by anything other than bodily fluids entering the bloodstream, so recoiling in fear, judgment or disgust from a person who admits to being HIV-positive is entirely uncalled for.

This is because HIV cannot survive very long outside the human body. It can't live on surfaces or in water or in the air. The only way one person can get the virus is when HIV-positive bodily fluid — blood, semen, breast milk or fluids from the vagina, rectum or anus — enters the bloodstream through open cuts, direct injection or mucous membranes like the vaginal walls, rectum or mouth.

Treatment isn't a cure, but it can be remarkably effective. Because HIV doesn't always turn into AIDS, not everyone who gets HIV will die from it. Whether or not the virus becomes fatal depends on when it's detected and when antiretroviral therapy begins. ART makes the virus more manageable and more difficult to pass on. It involves taking a specific course of drugs every day.

Which means that HIV-positive people can definitely date. There are things that HIV-negative people can do to keep their likelihood of infection low. Pre-Exposure Prophylaxis, or PrEP, is one such thing — a pill taken daily that disrupts the virus's replication process, reducing a person's risk of contracting HIV.

There's also Post-Exposure Prophylaxis, or PEP, which is emergency medication taken for one month following exposure. It does basically the same thing as PrEP, throwing a wrench in the viral replication process. According to the Centers for Disease Prevention and Control, PEP may induce non-life-threatening side effects such as nausea.

Neither should be considered a green light for unprotected sex, but modern medicine means that people with HIV can continue to have sex and romantic relationships.

And thanks to medical advances, HIV-positive people can have HIV-negative children. Doing so will involve planning with a medical professional, who can help the person with HIV significantly reduce their risk of transmitting it to their partner and child. It will involve closely regulated ART courses and careful monitoring, but starting a family with low risk for HIV is something that's very much possible for HIV-positive people.

All of which is to say, there's very little reason for the harsh stigma surrounding HIV and AIDS to persist. Life isn't over with an HIV diagnosis — what we need is to understand the facts.