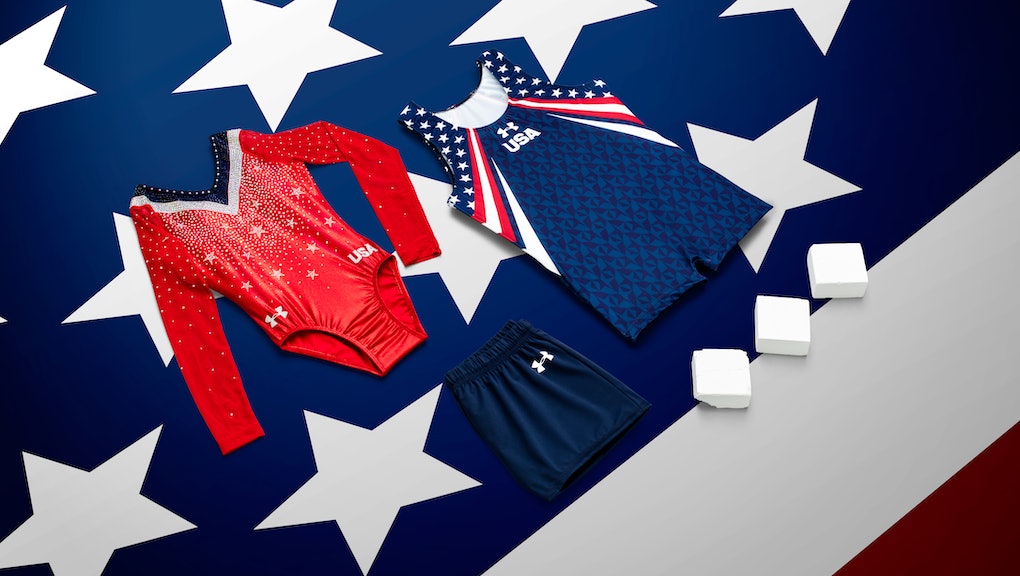 The first look at the official uniform for the U.S. Olympic gymnastics team is here and even notoriously unimpressed McKayla Maroney would be into these.

Read more: Meet the First US Athlete to Wear a Hijab to the Olympic Games

Debuted Tuesday morning at a Michael Phelps-hosted event at Under Armour's global headquarters in Baltimore, the uniforms will be worn at the Rio Games, which begin Aug. 5.

And the uniforms are appropriately glittery, girly and badass, just like the athletes, who were seen previously in one of three campaign videos Under Armour launched in February with the tagline: "It's what you do in the dark that puts you in the light."

What the athletes wear matters, especially in gymnastics, according to the team at Under Armour.

"One of this biggest learnings from gymnastics is that you win or lose base off of the judges' opinions, which makes the uniforms for gymnastics a big part of the competition (more so than in some other sports)," Adam Clement, Under Armour's senior creative director of team sports, told Mic.

To that end, the new uniforms have struck a middle ground between past uniforms, which were basically iterations of draped American flags...

... and more modern uniforms, which have added embellishments and experimented with a color palette beyond the expected red, white and blue. Think metallics, studs and shimmer (not to mention those famous scrunchies).

So what else has changed? "We are able to have fabrics that have stretch, move with the body but at the same time are lighter weight and can take on decoration," Clement said. "What you can do with them from a visual perspective is greater than it was 20 years ago and how the body reacts within them is also very different."

Under Armour also unveiled the official training gear that the girls have been wearing, which features leopard print spandex shorts and oversized tank tops, a welcome counter to the glitz and glam displayed during competitions.

Now, with their official uniform unveiled, the countdown is on — 149 days, to be exact — until vets Gabby Douglas and Aly Raisman join newcomers Simone Biles and Madison Kocian on the path to gold.