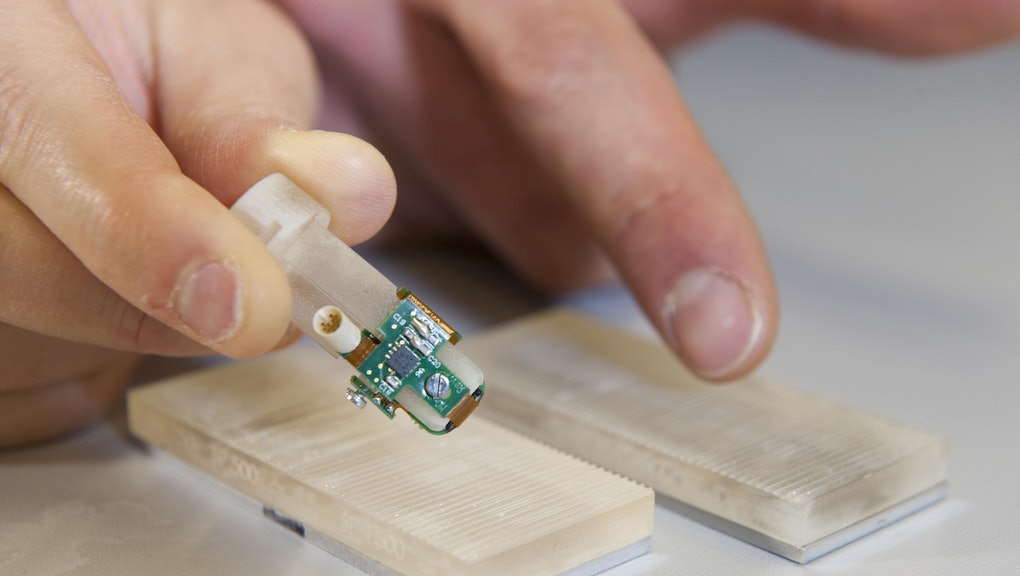 With a new bionic fingertip, an amputee can now feel the difference between rough and smooth textures.

On Tuesday, researchers from École Polytechnique Federale de Lausanne in Switzerland and Scuola Superiore Sant'Anna in Italy announced a new prosthetic that can mimic touch for amputees — in real time.

Dennis Aabo Sørensen, whose left hand was amputated after an accident, had the artificial fingertip connected to nerves in his arm (it wasn't a part of a bionic hand attached to him). As a machine moved the fingertip over rough and smooth surfaces, the fingertip sent back electrical signals that imitated "the language of the nervous system," sending the feelings to Sørensen's actual nerves. According to the researchers, Sørensen was able to distinguish the difference between rough and smooth surfaces 96% of the time.

To confirm the sensations were the same, the scientists hooked non-amputees up to the bionic fingertip, connecting it to the median nerve through their skin, then set them up with an EEG cap — a device that collects brain scans. According to the release, the non-amputees were able to distinguish the texture difference 77% of the time, and their brains reacted the same way whether using the bionic tip or their actual finger.

"The stimulation felt almost like what I would feel with my hand," Sørensen said, according to a press release. "I still feel my missing hand, it is always clenched in a fist. I felt the texture sensations at the tip of the index finger of my phantom hand."

Why it matters: Being unable to actually feel is one of the downfalls amputees complain about with their prosthetics.

For instance, if you need to hold a styrofoam cup full of coffee using a prosthetic hand, you need to learn how much pressure to use by sight, seeing how much the cup gives, and stopping right before the cup explodes.

By giving prosthetic fingers the ability to feel, amputees might be able to physically sense that pressure, rather than guessing where the explosion point is.

Amputees having the ability to adopt touch is groundbreaking: It could lead to major developments in robotic surgery tools and rescue drones. The robots could actually measure and exercise sensitivity when dealing with flesh-and-blood people in duress.

But let's take this a step further. It's not a stretch to say creating prostheses with enough sensitivity to tell the difference between rough and smooth textures, like this one can, could lead to the development of something like bionic skin.

Imagine the future: Bionic arms could pick up a breeze, or feel the sensation of holding hands. If this technology expands, it could give amputees a new sense to experience the world around them — something people with two hands and two feet often take for granted.