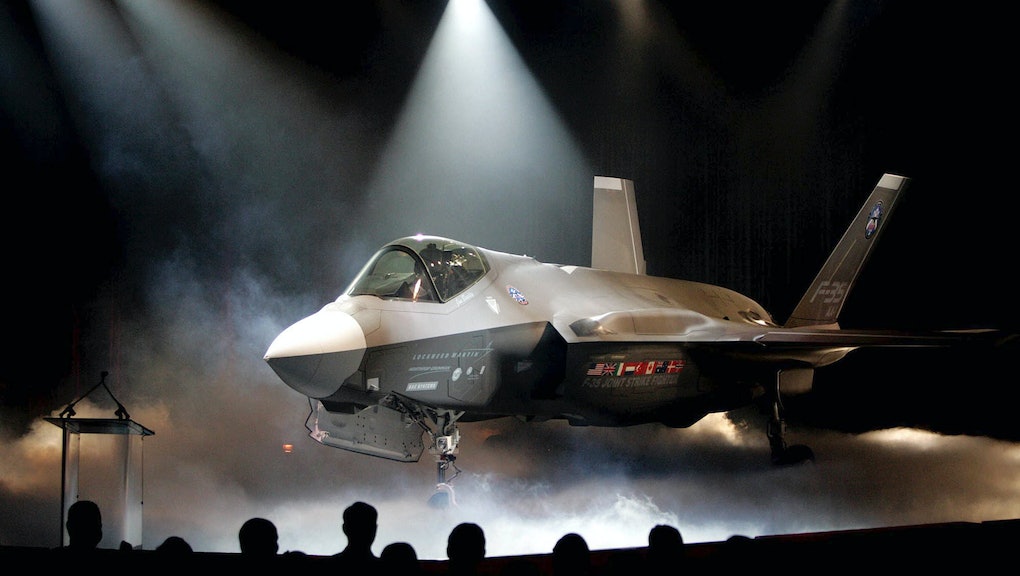 The future is — yesterday?

The F-35 Joint Strike Fighter, the Pentagon's next-generation fighter program that costs $400 billion for the first 2,457 planes and is expected to cost well over $1 trillion over the course of its 55-year life cycle, still has some very serious technical problems.

According to a report in the Guardian, in addition to a slew of previously reported problems — such as vulnerability to lightning strikes and zero tested capability to resist cyber attacks — the plane's radar system just occasionally stops working, forcing pilots to actually turn it off and reboot it before it will work again.

That's right. It's the Top Gun equivalent of pulling a Nintendo cartridge out of the machine and blowing on it — except when it's done with a Nintendo, an enemy fighter jet typically can't sneak up and blow you out of the air.

"What would happen is they'd get a signal that says either a radar degrade or a radar fail – something that would force us to restart the radar," U.S. Air Force Major General Harrigian told IHS Jane. Manufacturer "Lockheed Martin discovered the root cause, and now they're in the process of making sure they take that solution and run it through the lab."

A recent Pentagon report found severe limitations "in fusion, electronic warfare and weapons employment result in ambiguous threat displays, limited ability to respond to threats, and a requirement for off-board sources to provide accurate coordinates for precision attack," reports Gizmodo. Most of the problems are related to software, as opposed to the F-35's actual hardware components.

In 2014, the cost of the F-35 program up to that point could buy every homeless person in the U.S. a $600,000 home, unilaterally fund most recognized humanitarian crises, feed all schoolchildren in the U.S., or fund much of the desperately needed $1.1 trillion in repairs civil engineers estimate is needed to rejuvenate U.S. infrastructure.

Another project, the B-21 bomber, is widely feared to be a potential repeat of the F-35's cost overruns.