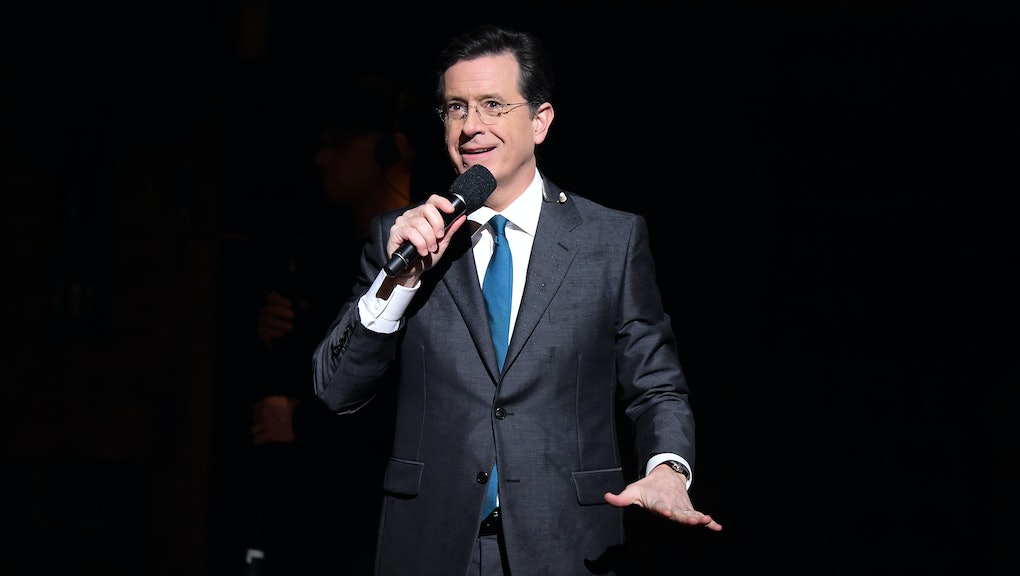 Stephen Colbert has been relentless in insulting Republican frontrunner Donald Trump on The Late Show — and for good reason. His political meandering and oft-controversial statements have left late night hosts such as Colbert plenty of ammunition for cheeky skits. As a result, at this stage in the 2016 presidential election process, it's unsurprising that another Trump controversy took center stage at the most recent Republican debate: the small hands jab from Florida Sen. Marco Rubio, and Trump's absurd defense for the length of his penis.

"This is what I do for a living, and there's no way in hell I'm gonna let an entire election go by without talking about this," Colbert said on Monday's show. Colbert wrapped up the skit by calling the Trump hands controversy the "new low" for the current political spectrum. He said it was lower than the likes of the John Kerry Swift Boat controversy, the Obama birther theories, John McCain's illegitimate child (completely untrue) and the Hillary Clinton email scandal. In fact, it's lower than the Founding Fathers spinning in their graves.

Read more: It's Not Just Donald Trump — The 2016 Election Has Been All About Dicks and Balls

During the episode, Colbert poked fun at Trump's "executive package" in increasingly clever ways, questioning Trump's manhood by claiming he shouldn't feel the need to plaster his name on every building, before the Late Show building with Colbert's name was displayed on screen.

He also subtly took jabs at the embarrassing outlook of the Republican Party — one where the subject of penis length is brought up at a national debate by the party's presidential front-runner. His case in point: imagining how the present-day debates would have been construed in the time of Abraham Lincoln and Stephen A. Douglas.

Lincoln's fictitious retort: "No American, whether from North or South, free or slave, has ever complained about the size of my Lincoln log. And yes, the beard matches the drapes."

The only way the presidential race could be worse off, Colbert said, is if there were "an onstage nut punch followed by closing statement delivered via one long burp."

Colbert's demonstrated a deft touch of humanity on The Late Show since taking over the spot last year, and has been a welcome edition to the late-night television scene. However, when it comes to the absurdity of this year's election cycle, the host isn't afraid to tell it like it is, albeit toned down from his previous conservative caricature.

Check out the full skit on the Trump hand controversy from Monday's show below.