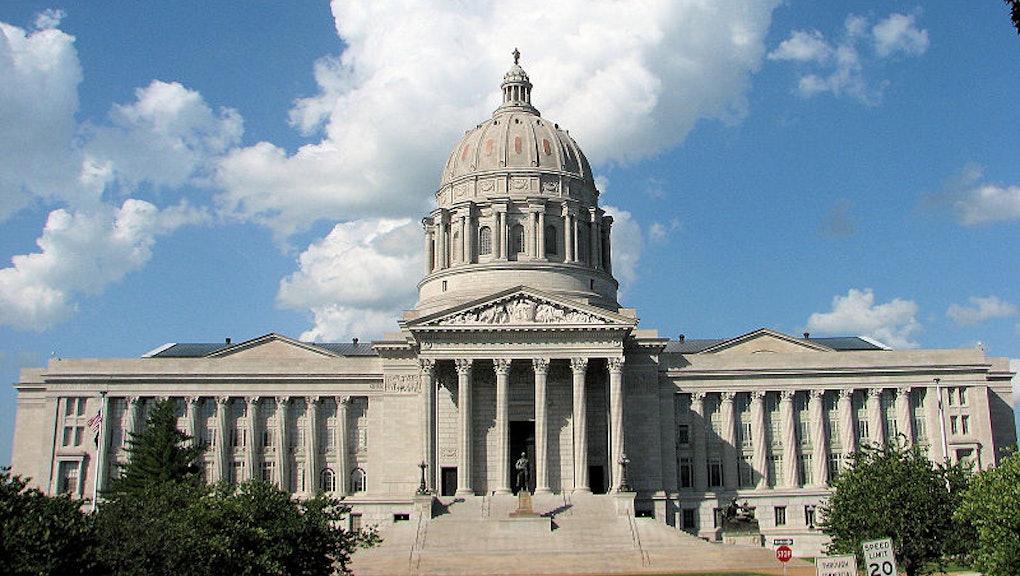 When in doubt, stall for time.

From Monday afternoon to Wednesday morning, Missouri Democrats held a marathon filibuster, hoping to kill a bill that will protect gay rights' opponents. According to the Kansas City Star, the state senators began the filibuster around 4 p.m. Central on Monday, and were still going as of 1 p.m. Tuesday afternoon.

The anti-LGBT legislation, known as Senate Joint Resolution 39, will amend the Missouri Constitution and block the government from taking action against businesses and individuals who refuse their services to same-sex weddings. Republican state Sen. Bob Onder was the bill's sponsor, and said he hoped to secure the "rights of those who disagree" with the new legislation.

Onder maintained his bill wasn't discriminatory, but Democrats didn't find that very convincing when Onder's fellow Republicans said their piece. Sen. Davis Sater noted that the Bible condemns homosexuality as an "abomination," though he added that he doesn't condemn it himself.

"A lot of the arguments I'm hearing of proponents of this bill harken back to the same arguments we heard back in 1964 when people were fighting for segregation in Mississippi," said state Sen. Jason Holsman.

For those who think they wouldn't enjoy a binge listening sesh to a filibuster audio stream, consider this: At one point when we tuned in, a senator was giving a play-by-play account of his recent trip to Harry Potter World.

Senate President Pro-Tem Ron Richards encouraged senators to debate until the bill was successfully thwarted, though they were ultimately unsuccessful. At one point, according to an LGBT advocate, a text exchange between Holsman and his wife hinted that they hoped the filibuster would extend into Thursday:

After a total of 39.5 hours, the filibuster ended on Wednesday, beating the record Sen. Strom Thurmond (D-S.C.) set in 1957 when he filibustered that year's Civil Rights Act. But despite Democrats' best efforts, the Missouri Senate passed SJR 39.

According to Towleroad, Republicans resorted to a procedure that allowed them to cut off the filibuster with a simple majority vote and force the Senate to vote on the bill.

But it's not over for LGBT rights supporters. Last week, Missouri organization for LGBT equality Promo and the ACLU released a statement promising that, no matter the fate of the legislation, they would continue fighting:

"Let's be very clear: the current rash of legislative attacks on LGBT Missourians is discrimination thinly veiled in 'religious exemptions,'" reads the statement on Promo's site. "These bills do not reflect the true purpose of the First Amendment, which already firmly protects religious freedom, nor do the sponsors reflect the true values of the majority of Missourians."