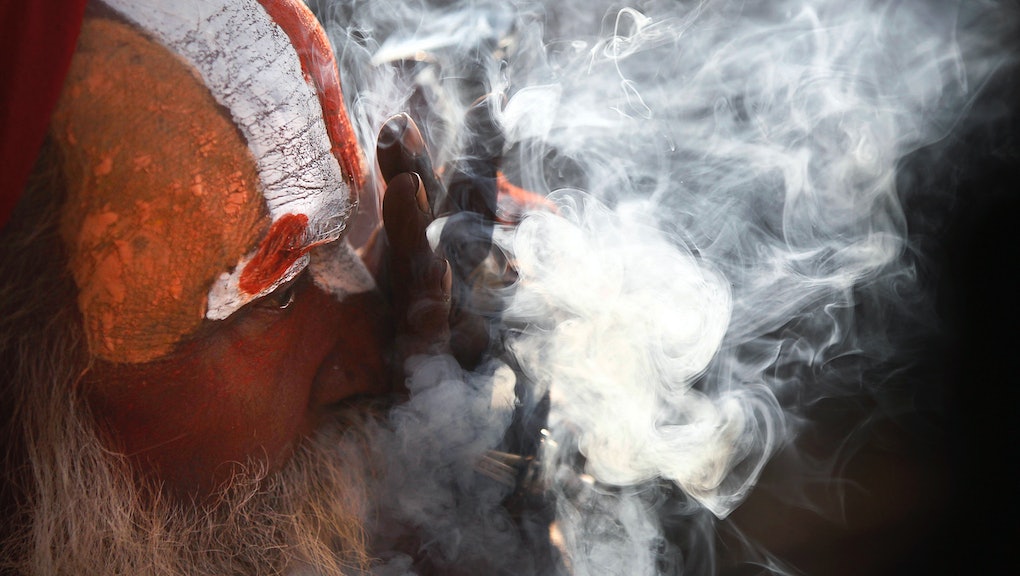 Marijuana and Yoga: Should You Get High Before Yoga Class?

When most people think of a yoga practice, they likely imagine a fitness mat, deep breaths or various outstretched positions. However, marijuana users have combined the exercise and the plant to create "yoganja," or simply ganja yoga. Instructors encourage their students to consume ganja, a slang term for marijuana, before class.

"Everyone in the class spends 15 minutes getting high together — you can smoke a joint or a bowl, or vape or consume edibles — and then everyone does a 75-minute yoga class together," Jessica Misener, an editorial director for BuzzFeed, wrote after experiencing the weed-influenced yoga class for the first time.

Read more: A Case for Medical Marijuana: How Weed Helped a Teen Cope With 3,000 Seizures a Day

According to The Stoner's Cookbook, yoga and marijuana have similar purposes: They both promote relaxation, ease physical ailments and encourage deeper awareness for their users.

Dee Dassault, a ganja yoga instructor in San Francisco, is "the first yoga teacher outside of ancient India to publicly offer cannabis-enhanced yoga classes," according to her personal page. "Historically, cannabis has been linked to really early use with yoga in ancient Shiva cults," Dassault told ABC News. "Back then, they weren't smoking it, but drinking it in a milk beverage and burning it as an incense. But if you're burning incense, you're essentially hotboxing the temple as a result."

But how can marijuana, a schedule I drug, be associated with a gentle exercise like yoga? "The yogic theory behind all of this is: Not only does marijuana allow the practitioner to go deeper inward, it allows practitioners to fully relax and breathe deeply while allowing the stresses of life to fall away," Afarin Majidi writes on First To Know.

"For those who find their minds wandering during the practice or they have a hard time balancing, they've either smoked too much (yes, it's possible) or this type of practice that incorporates cannabis is just not right for them."

Of course, you can't just walk into a ganja-yoga-friendly studio with an open flame, as some instructors don't allow smoking in the studio. Further, any students interested in participating must live in states where medical marijuana is legal and have any necessary licenses.