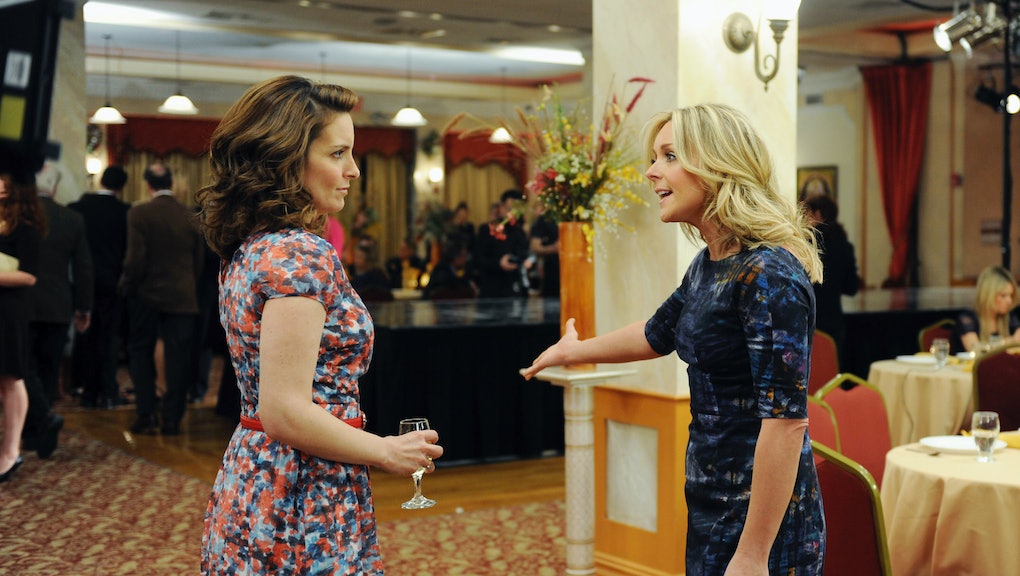 The Case For Having (And Keeping) "Small Dose" Friends

Shortly after I first met her, my friend Katrina* started ruining my life. Every night with her could very well have ended in a jail cell (though most nights, she ended up in some random dude's bed). Once, she blacked out and disappeared for 14 hours, then woke up on a stranger's futon still fully clothed. Another time, she ended up in the hospital and started flirting with one of the nurses, unaware that one of her boobs was hanging out of her blouse.

After a few years of feeling the life force draining out of me, I told Katrina I couldn't be best friends with her anymore. Today, she's one of the most important people in my life, even though I haven't seen her in years.

On the spectrum of platonic relationships, the Small Dose Friend sits somewhere between the Emergency Contact Friend and the Toxic Hot Mess Friend. The Small Dose Friend is someone whose presence is like acetaminophen or wasabi: sometimes, it can be enjoyable (or even palliative), but in large amounts it can be harmful, even dangerous. The Small Dose Friend has usually been around since childhood or adolescence and manages to be a constant in your life without being a regular presence. If not for keeping your time with this person to a minimum, they'd probably ruin your life.

Indeed, frequent contact with Small Dose Friends will likely lead to a state of constant anxiety or exhaustion because of their proclivities for setting shit on fire when intoxicated, doing ecstasy at office holiday parties or calling at 2 a.m. because they lost their pants and their keys and need a couch to sleep on. They're fun and they mean well and do genuinely love and understand you. Still, they tend to make a mess of their own lives and, if given the opportunity, would rely on you to clean it up.

"Oh, my friend Jessica* is out of her goddamn mind," Hannah*, 24, told Mic. "She was always kind of nuts, but it definitely came out once she got to college. I've learned to just sort of....not have expectations when it comes to her. She's insane and flaky, but she's not a malicious person by any means. She's one of those larger than life people who, like, keeps people around by the pure force of her orbit."

Yet despite the pop psych refrain that you should prune your toxic friends from your life, Hannah and others have found there's something to be said for giving into the inertia of certain relationships, if only by minimizing the amount of poison they add on a day-to-day basis. There's a difference between cutting out toxic friends and cutting out toxic friendships; sometimes if you tweak the expectations and boundaries of the latter, the former becomes much less draining.

While friendship breakups are often worthwhile, they can often drain us more than the people we're trying to eject from our lives. As Adrianna*, 25, told Mic, she first met her Small Dose Friend in ninth grade, and quickly discovered she had a tendency to stretch the truth about basic details of her life. Knowing to take her friend's words with a grain of salt has allowed Adrianna to limit her contact with her friend to once a year, which she says is preferable to cutting her off entirely.

"I tell her a little bit about my life and then she talks at me for the rest of the time," Adrianna said. "I do still care about her a lot, and the emotional labor that would be required to cut her out of my life is far greater than our annual catch up."

What's more, Adrianna finds she's gotten something huge out of the relationship. "I have learned to spot people with similar personality traits — and stay away from them," she said. "I have learned a lot about how much I value emotionally-balanced friendships after having one that is so one-sided."

According to Irene S. Levine, a trained clinical psychologist and author of the Friendship Blog, being able to articulate such specific benefits of a friendship — even if they don't seem very positive — can be reason enough to keep a Small Dose Friend around, so long as they're not otherwise wreaking havoc.

"If something is consistently toxic or consistently negative, then you just don't want it," Levine told Mic. "But if it's somebody with whom you have a shared history that's irreplaceable — somebody who knows your parents, grew up on your block, went away to school with you — these are treasured memories you share with a person."

That's what has kept 23-year-old Marie*, who has known her closest Small Dose Friend since she was 9, invested in the relationship. She told Mic the friendship has ultimately highlighted what she most enjoys about her everyday routine and the other people in her life.

"Figuring out what you find toxic helps you [figure out what you] want from the people you prioritize spending the most time with, and also can be a mirror for you," Marie said. "Calling or labeling someone 'toxic' [gives you]...an understanding of your unhappiness. It allows you to make active changes to take control of your well-being."

Still, Levine noted, it's important to remember that friendship is supposed to bring more good to our lives than bad. Small Dose Friends still add value, even if it's not enough to merit a spot in your daily life, while toxic friends genuinely cause pain and consistently bring turmoil into other people's lives.

But it's possible to mitigate negativity without bailing on a toxic friend entirely, by reducing their toxic influence and setting boundaries. Learning how to navigate a tough relationship rather than leave it behind can also be a crucial education in sticking by someone even when it sucks, as happens with people we're supposed to love unconditionally like spouses, siblings, parents and kids.

"You want to find a way to make the friendship work for the two of you," Levine said. "It could be by spending less time together, spending time with other people, saying something when they do or say something offensive. ... It's not black and white. It depends on the nature of the craziness, the strength the person brings to the friendship, the depth of your history together."

"You want to find a way to make the friendship work for the two of you."

Toxic friends, the ones who truly need to be weeded out, can make us lose ourselves without gaining anything back. Then there are people like Katrina, who every once in a while — and only for a second — show us a different part of ourselves, and remind us why we became friends in the first place.

Last time Katrina and I were in the same city, I braced myself for another evening of wacky misadventures that would likely cost me hundreds of dollars in bar tabs or bail or therapy. She surprised me, though, by suggesting we go for Korean barbecue, to a restaurant that didn't even serve alcohol. She wanted my opinion about applying to law school and I wanted her opinion about my new boyfriend. It felt like our roles had reversed overnight.

That was two or three years ago and we haven't seen each other since, and Katrina is probably moving across the country soon. I know because she told me when we texted for a few days about a month ago; the two of us have a Skype date next week. Our contact with each other might be sporadic, but hey — that's what works best for us.