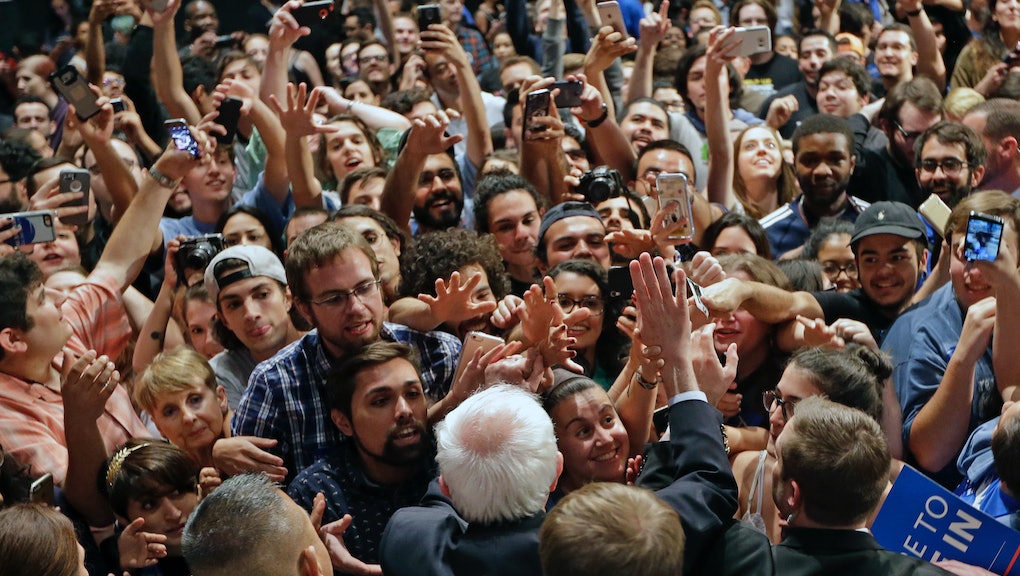 One Surprising Factor in Bernie Sanders' Huge Upset in Michigan

This wasn't supposed to happen.

But the democratic socialist senator from Vermont won the Michigan primary Tuesday night, in a result that's already being hailed as one of the greatest upsets in modern American political history.

How did Sanders defy the odds? Nobody knows exactly how just yet. His surprise victory in the delegate-rich state is prompting a discussion on the weakness of certain polling methods, as well as a reckoning with the ethics of writing off a race as uncompetitive for a candidate during an election cycle that seems to be discarding conventional assumptions about political possibility on a daily basis.

But already at least one data point has emerged from Tuesday's results that clearly indicate how Sanders' appeal as a candidate is more complicated than commonly assumed so far: He has finally shown that he can make inroads with black voters. So far during this primary season, Sanders has lost black voters to his rival Hillary Clinton by astonishing margins — in South Carolina in February, he lost them by about 70 points. In Michigan last night, he lost black voters by 40 points. That's still a real loss, but a significantly smaller one than he's seen across the Southern states, where he's been trounced by Clinton.

The fact that Sanders can improve on his dismal performance among black voters in the South bodes well for his campaign. It's also a crucial reminder for political analysts that black voters aren't a monolith.

So far this year, Sanders has lost black voters to Clinton by an average margin of 84% to 16%, according to the Washington Post. In Michigan, he performed almost twice as well as he usually does, nearly hitting the 30% mark in black voter support, while Clinton pulled in 68% of the black vote. Given that black voters made up over a fifth of Michigan's Democratic electorate and Sanders' won by less than two percentage points, his stronger-than-usual performance among black voters was crucial to his unexpected success.

Sanders' black support in Michigan raises some interesting questions about his appeal to communities of color. There are a number of possible factors that could be contributing to how it differs from in other states so far, but at least one thing is immediately evident — black voters, like white voters, aren't uniform in their views.

"We have to break free from the assumption that African-American voters are this monolithic bloc who tend to think similarly and behave politically in a similar fashion," Eddie Glaude Jr., chair of the African-American studies department at Princeton University, told Mic during a conversation about the results.

So far this primary season, the overwhelming majority of the black electorate that Sanders has faced has been in the South. Michigan marked the first major nominating contest outside of that region where black voters have constituted a significant portion of the electorate — over 20% — and that matters.

The Rust Belt has a distinct history from the South in a number of respects. Its once booming 20th-century economy has been hollowed out by deindustrialization which bred a regionally specific attitude toward the effects of free trade; it has a unique history of organized labor politics; and the region was hit particularly hard by the recession. Just as these material conditions shape the political values of white voters in the Midwest differently than in other regions, so they do with black voters.

"The South is a more conservative region — it's possible that black voters in the South are more centrist, especially given influence of churches," Glaude told Mic. "If we disrupt this idea that African-Americans are the unthinking creatures of American politics, we can actually see them making decisions that reflect different kinds of ideological commitments and different kinds of political currents."

The black political class in the South could also be more moderate than it is in the Midwest, and could therefore tug rank and file black Democratic voters toward more establishment candidates there as well, Glaude said.

Age, too, could be a factor. While there isn't detailed data on the breakdown of minority voters by age available yet, past trends suggest it's playing a role.

"When you break down those Southern numbers by age, Sanders does better with younger black voters," Andra Gillespie, a political scientist who specializes in political mobilization and race at Emory University, told Mic. "What we're probably seeing here is the black electorate in Michigan is probably younger."

In Michigan Sanders split black voters under the age of 45 with Clinton, but lost them by a wide margin when they were older.

Madala Mathurin, a junior at Wayne State University in Detroit, told Mic that he felt that some minority student groups like the Black Student Union on his campus were particularly enthusiastic about the prospect of a Sanders nomination. He said that Sanders' consistency in his message and stories of his antiracist activism were a theme in political conversations he had in the run up to the primary.

"There's a couple pictures of him doing activist work for blacks in the community he was in back in the day," Mathurin told Mic. "And there were an instance where an African-American lady got on a stage [to disrupt Sanders' event as part of a Black Lives Matter protest] and Bernie did not deny her access to his stage — that was a big deal here."

Just as among voters overall, there are constant signs of a generational gap between younger and older black voters in their preference for Sanders or Clinton.

As the primary season continues to unfold across states outside of the South, it will be important for political analysts to seek more nuance in assessing "the black vote." Statistically speaking, race can be a useful predictor of political behavior, but it does not excuse pundits from ignoring the complex ways it intersects with all the other demographic characteristics of a voter.

That all being said, Sanders' results in Michigan shouldn't be over-interpreted. There are plenty of states coming up outside of the South that have a sizable black and Latino electorate, and they should provide more insight into the reach of Sanders' appeal. But for now it's best to remember that we should think critically about making generalizations about demographic trends. Just like white voters, voters of color have a wide diversity of views on the future of this country.