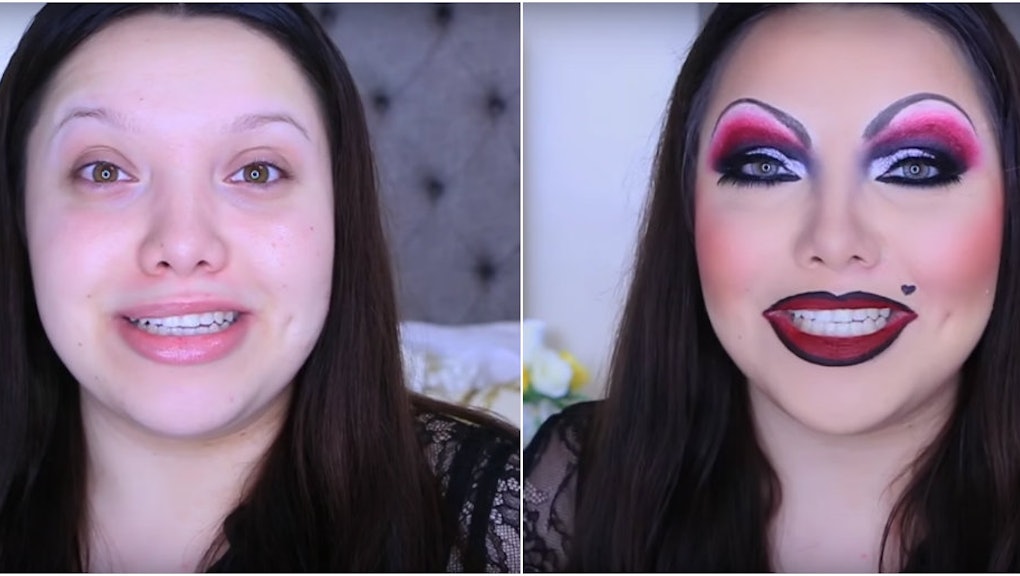 This Girl Recreated a Snapchat Filter on Her Face, and Oh the Lengths She Went To

That was the sentiment many people had last week when Snapchat released a new filter that transforms your face into that of a heavily made-up drag queen (think: RuPaul's Drag Race season 8 contestant Acid Betty).

Folks went positively bananas, not just because of its effortless opulence, but the filter's accuracy at matching itself up against your face, effectively giving you the appearance of a drag queen.

YouTuber Mayra Isabel (aka mayratouchofglam) wanted in on the fun — but with a twist. She wasn't about to let some nondescript filter overtake her ability to get the look IRL, so she did what any sensible beauty blogger would do: bought a glue stick and got to work.

She began by sharing an in-depth analysis of her thoughts on the filter: "Oh snap. Oh shit. This filter... I cannot. Slay, girl."

So what inspired her to recreate it? "It's such a funny look," she says in the video. "obviously something you, like, don't want to wear. But I thought it was hilarious, and I wanted to go ahead and recreate it."

After popping in some gray contact lenses, Isabel "prime[d] the face" before busting our her Elmer's glue stick to make her eyebrows disappear.

After her brows dried, it was time for a thick layer of foundation. "We're going for a drag look," she said, "so why not?"

Next up: heavy concealer. (Are you sensing a theme?)

With her face beat and eyebrows all but erased, Isabel began the process of adding white eyeshadow to the brown bone. Then the eye shadow began. Then a glitter base. Then eyeliner. Then lashes...

All done? Of course not. No drag look could be considered complete without contouring. After applying bronze, blush, lipstick and the filter's signature heart-shaped mole...

....the look was finally complete.

While we're mighty-impressed (as one should be with anyone who applies glue to their brows), we'd love to see Isabel next tackle Snapchat's new face swap filter.

It might seem impossible — then again, so did the drag filter before Isabel slayed the look.