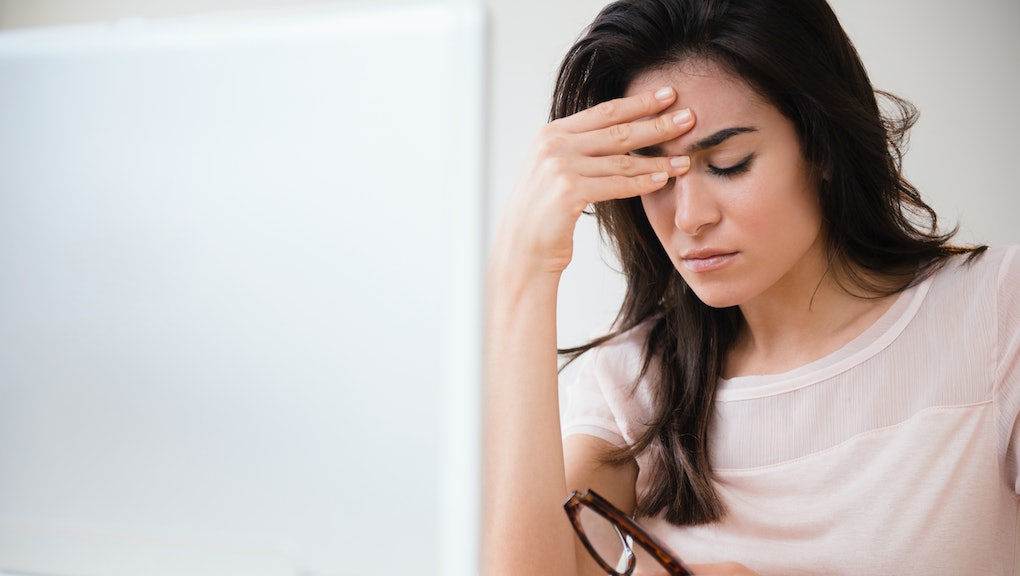 The Cause of Anxiety: It Could Be Coded in Your Biology

Has anyone ever told you to stop being so anxious all the time? Now you can tell them your anxiety is encoded in your biology.

People with anxiety don't choose to think that way — rather, it's just the way their brains are hardwired to perceive the world. Those are the findings of a small-scale study, published in the journal Current Biology, that measured how well people with anxiety could distinguish between neutral and threatening situations.

Past research has shown that people with anxiety tend to overgeneralize. In other words, they interpret harmless stimuli as being dangerous. In this study, the researchers aimed to find out if people with anxiety choose to act that way — exhibiting an intentional "better safe than sorry" mindset — or if overgeneralization is just the way their brains work.

The researchers took 28 people with anxiety and played three sounds for them, according to Reuters. Each sound was associated with a different outcome: money loss, money gain and no consequence. Next, they played a series of 15 new sounds, and asked the participants to report whether they'd heard any of those sounds before. Would they recognize the new sounds as being different, or would they over-generalize and equate them with the three sounds they'd heard before?

Compared to a control group of 16 people without anxiety, the 28 participants with anxiety were more likely to associate the new sounds with sounds they'd heard before, the study found.

"Our study suggests that people with anxiety cannot discriminate, at the most basic level, between stimuli that have an emotional content and similar mundane or daily stimuli," said lead author Rony Paz, according to Reuters.

"This in turn might explain the anxious response that they exhibit to scenarios that seem regular, normal or non-emotional to anyone else — their brain cannot discriminate and responds as if it is the anxious stimulus," Paz continued.

MRI scans of the participants' brains backed up the results of the experiment. In participants with anxiety, the imaging showed increased activity in the amygdala — a portion of the brain tied to fear and anxiety — according to Reuters. There was also more activity in the primary sensory regions of their brains.

"If you're anxious, you're hardly to blame," said Dr. Damiaan Denys, a University of Amsterdam psychiatry researcher who was not involved in the study, according to Reuters. "It is not a choice or a lack of willpower."

An estimated 18.1% of Americans deal with anxiety,  according to the National Institute of Mental Health. Collectively, anxiety disorders are the most common mental health issues in the U.S.