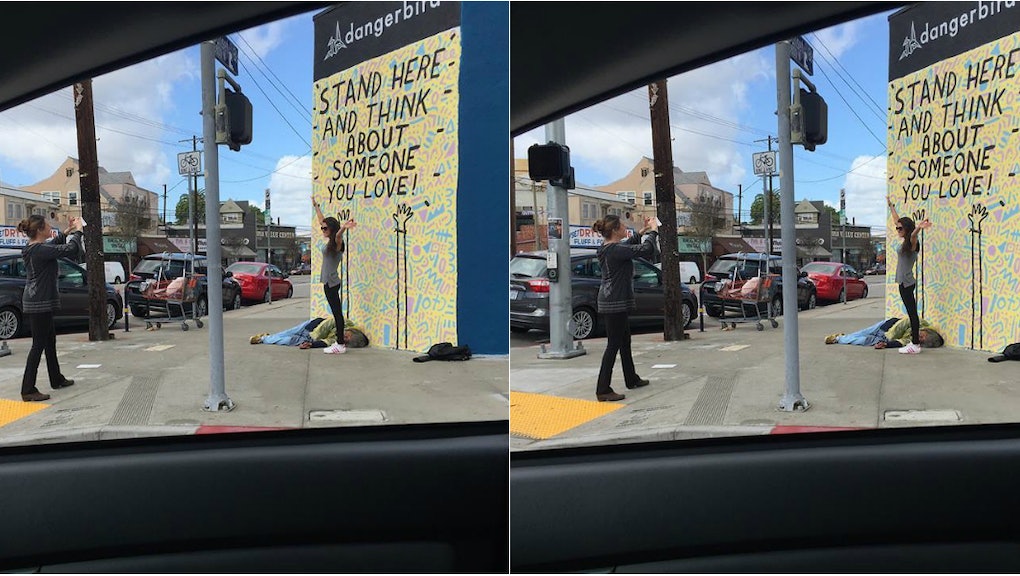 One unlucky woman picked the wrooong Los Angeles mural to take a photo in front of on Sunday. Why?

Because the woman struck a jolly and carefree pose while a homeless man just so happened to be sleeping on the sidewalk a mere few feet away from her, um, feet.

The kicker? The mural featured an inspirational message preaching the importance of having empathy.

Here is a short list of things we know so far:

1. The mural — which reads, "Stand here and think about someone you love!" — was designed by author and illustrator Dallas Clayton for the indie record label Dangerbird.

2. The viral photo of the two women was posted to Facebook by Los Angeles real estate agent Rich Michalowski, who wrote in a Facebook comment on Sunday that he "took it this morning and couldn't believe it."

3. Some people are very pissed off and believe that this girl's cluelessness is emblematic of America's troubling homelessness problem. "I have chills from how disgusting this is," wrote one commenter on the original post.

4. To add to the irony of the photo, the picture was snapped in Los Angeles's Silver Lake neighborhood, which has been subject to rapid gentrification in recent years. Los Angeles has the biggest chronic homeless population in the country, according to the United States Housing and Urban Development Department.

5. It's worth noting that the women in the picture have yet to be publicly identified. It's also worth noting that, because the women have remained anonymous, we don't know the precise context of the photo. (So they, like, could very well have given the guy in the photo a sandwich afterwards. We just don't know!)

6. Clayton, the mural's designer, addressed the controversy via Facebook late Tuesday night. In his post, he urged people not to focus solely on the outrage factor of the photo and instead reflect on the systemic socioeconomic issues that led to the man in the image sleeping on the street.

"I appreciate that this photo is shining a light on the disparity between the haves and the have nots," Clayton wrote. "[B]ut honestly if it takes this photograph for you to realize that this disparity exists I don't imagine you've been paying attention to society as a whole for the past fifty or sixty years."

7. Indeed, the photo has clearly generated a conversation about homelessness in the United States.

"I just volunteered at a shelter because of this photo," one newly woke bro wrote on Facebook.

"You don't have to dedicate your life to the needy to know that taking a pic like this is pretty gross," another user chimed in. "And tomorrow's my shelter volunteer day, btw."

Here's to the power of a viral photograph paired with a healthy dose of internet self-righteousness to change the hearts, minds and actions of America.