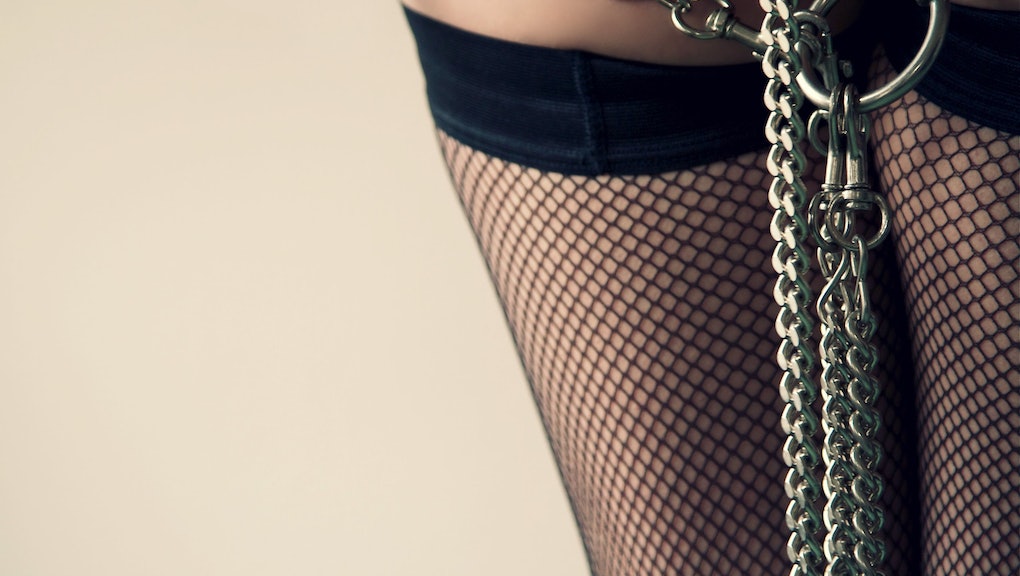 For decades, Americans have been operating under the assumption that people who are interested in quote-unquote "kinky" sex were the types of people who slept on buses and masturbated at the public library. Until fairly recently, it was unacceptable for anyone to partake in anything other than polite, 6-minute missionary sex while the kids watch Doc McStuffins in the next room.

Thanks to the increased visibility of the sex-positive movement and the immense popularity of Fifty Shades of Grey, however, Americans are starting to come around to the idea that people who are into kink might not be filthy sex perverts after all. In fact, they could be — gasp! — living right next door to us all along.

According to a recent study from the Journal of Sex Research, many sexual preferences that have been classified as "deviant" by the psychiatric community are actually extremely common, thus proving that there's no such thing as "normal" when it comes to having a healthy, consensual sex life.

Authored by Christian Joyal and Julie Carpentier, two researchers at institutions affiliated with the University of Montreal, the study surveyed a diverse group of more than 1,000 people in Quebec about their sexual proclivities, asking them if they enjoyed sex acts that were considered "anomalous" (read: weird) by the latest Diagnostic and Statistical Manual of Mental Disorders, otherwise known as the DSM-5.

These sex acts and behaviors included, but were not limited to, voyeurism (the act of enjoying watching people have sex), frotteurism (a fancy term for dry-humping), fetishism (a sexual attraction to inanimate objects, e.g. body parts) and masochism (deriving pleasure from pain or humiliation).

These supposedly "anomalous" paraphilias are actually pretty common. Thirty-five percent of the study's subjects, for instance, reported that they were interested in voyeurism, while 26% reported being interested in masochism and frotteurism. That's an awful lot of people getting sexual gratification from rubbing up against bus station stops.

All in all, 45.6% of the study's subjects were interested in at least one type of sexual behavior that was listed as a paraphilia in the DSM-5. "The main takeaway is that if you have a diverse sex life, and you enjoy it, with a partner who also enjoys it, please, don't consider yourself as anomalous," Joyal told Mic.

In short: don't act so high and mighty when you hear about someone who enjoys putting electrodes on his nipples, or a lady who just loves to stretch out her anus like a piece of Silly Putty. You just as freaky as the rest of us.

In truth, it's not exactly shocking that a sizable number of adults would be open to certain kinks and fetishes.

The Fifty Shades effect is also visible in academic sexuality studies. According to a 2014 study by Joyal, between 30% and 60% of women had sexual fantasies of "being dominated, being spanked or whipped, being tied up, and being forced to have sex." Joyal also pointed out to Mic that "the internet and the wide availability of diverse pornography" have also played a role in the development of our sexual tastes.

"Sexual behaviors are fundamentally linked with procreation, of course, but their diversity is modulated by socio-cultural factors," he explained, pointing out that just a few decades ago, oral sex was still illegal in many states, while now it's a widely accepted part of many couples' sexual routines.

It's also not exactly shocking that the DSM-5 would betray a prudish attitude toward human sexuality. While the manual has long been considered a sacred text for the psychiatric community, it's oft criticized for adopting at best problematic and at worst shockingly retrograde stances toward sexuality. Homosexuality, for instance, was listed in the DSM as a mental disorder until as recently as 1973.

There are some questions about whether the study makes any distinction between so-called "acceptable" or increasingly mainstream BDSM-related fantasies, such as being tied up or being lightly spanked, and more extreme ones, such as enforced chastity or financial domination. Joyal also told Mic that only about half of the behaviors the survey examined are legal; frotteurism, for instance, is by definition nonconsensual and therefore illegal.

Regardless, the study has one clear takeaway that we can all get behind: shaming people for their (consensual) sexual preferences is v. dumb and bad. Get with the program, prudes!