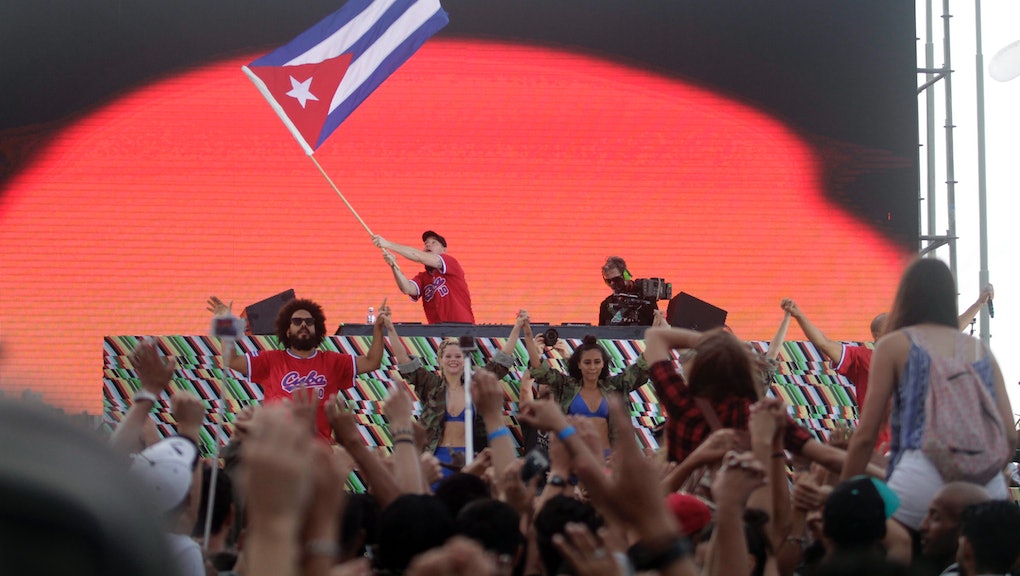 Diplo and Major Lazer's Cuba Concert Was a Big Deal for US, Cuba Relations — Here's Why

DJ Diplo and electronic act Major Lazer have claimed a milestone by becoming the first Americans to perform a huge concert in Cuba since diplomatic relations between the two countries were reinstated in 2014. On Sunday, between 450,000 and a half-million concertgoers turned out in Cuba's costal capital, Havana, to watch the artists perform, the New York Times reported. The concert unfurled in front of the U.S. Embassy in a plaza called José Martí Anti-Imperialist Platform.

"This is probably going to be the most important show we have ever done," Diplo wrote on an Instagram post prior to the event. "Electronic music can seem ambiguous to people but here it feels like it's gonna mean a lot to bring it to these kids because it belongs to them @majorlazer en Havana... peace is the mission."

Read more: Obama Plans to Visit Cuba, Becoming the First Sitting President to Do So in 80 Years

The artists shared photos of the experience onstage and in the streets of Cuba to their respective Instagram accounts:

In July, Obama announced that the U.S. would open a U.S. Embassy in Cuba. "This is not merely symbolic," he said. "With this change, we will be able to substantially increase our contacts with the Cuban people, we'll have more personnel at our embassy and our diplomats will have the ability to engage more broadly across the island."

Obama is also planning a trip to Cuba on March 21 and March 22, marking the first sitting U.S. president's visit to Cuba in 80 years.

"Of course nobody expects Cuba to be transformed overnight," Obama said in his address in July. "But I believe that American engagement through our embassy, our businesses and most of all through our people is the best way to advance our interest and support for democracy and human rights."

As perhaps proof of that message, the importance of Sunday's show in Havana extends beyond the realm of politics. It ekes into the world of something much more primal — the shared experience of music.

"It's the very first time I've seen my generation so happy," said Cuban national Robin Pedraja, according to the Times. Diplo said the event matters both for music's globalization and evolution.