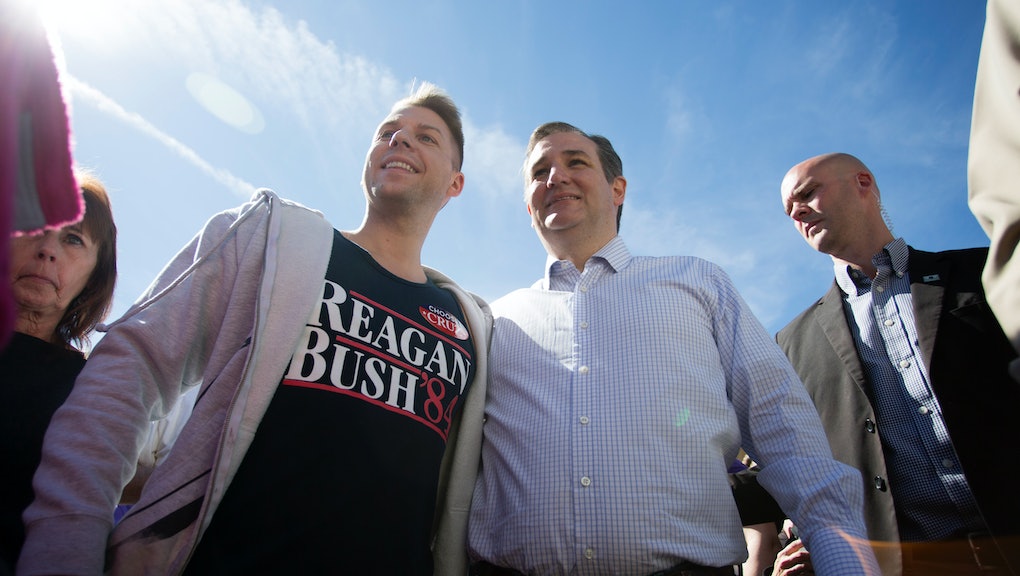 Two weeks ago, Donald Trump was on a presidential debate stage in Houston, mocking rival Ted Cruz for not having the support of a single Senate colleague.

"You should be ashamed of yourself," Trump said.

"He will do what he said. He will speak the truth," Lee said at a Miami news conference. "He is the only Republican candidate who can defeat Donald Trump [and] Hillary Clinton — and I believe he will."

Read more: Republican Debate Livestream: When and Where to Watch the GOP Debate on Thursday

That's hardly a lock: Frontrunner Trump's proven he can pull voters across the electoral map.

But to date, Cruz has beaten Trump among GOP voters in Texas, Kansas, Oklahoma, Idaho and Maine. He's scored the backing of former rival Carly Fiorina as well as conservative commentators Meghan McCain and Mark Levin.

And with Marco Rubio on the ropes in his home state of Florida, and Ohio Gov. John Kasich way back in the delegate race, Cruz supporters are trying to fuel the storyline that he's the man to stop Trump from running away with the GOP nomination.

"Ted Cruz has made enemies by taking on the political class," Fiorina wrote in a campaign email. "They're scared we found our guy."

Come together? Erick Erickson, founder of the conservative RedState Gathering, is on a mission to get people on board with Cruz.

Erickson, who's also a radio host, is one of the right-leaning voices who consider Trump unworthy of the GOP nomination: "The field needs to clear for Cruz," he wrote for the Resurgent on Wednesday.

"There are legitimate arguments against Cruz as a nominee, but there is one overriding argument for Cruz: He is winning states, even states we have all been told he would lose and could not compete in," continued Erickson.

Asked by Mic to weigh in on whether the establishment will coalesce around Cruz, Trump campaign spokeswoman Hope Hicks simply replied, "Pass."

Trump's tone: Cruz could also be the beneficiary of a sense that Trump — as shown by the hand-and-other-things size comparisons at the GOP debate in Detroit —  makes Republicans and conservatives look like buffoons.

Also casting shadows on the tenor of the Trump campaign ahead of Thursday night's debate in Miami: The recent double-whammy of the alleged assault of a reporter by Trump's campaign manager, Corey Lewandowski, and the sucker-punching of a black demonstrator by a white Trump supporter at a rally in Fayetteville, North Carolina.

No single savior: Like his ideas or not, Cruz is a lawyerly, skilled debater who has argued before the Supreme Court.

It's entirely possible that he — perhaps with the help of Rubio and with non-interference by Kasich — could goad Trump into losing his cool or saying something he'll have to account for later.

Still, if it's a battle for a finite number of GOP votes, Trump supporters tend to be the most loyal, and they're not turned off by even his most controversial stances. Just the opposite, in many cases.

Team Cruz and its supporters know that quite well.

"The country really is angry. There is a large group of people who have just checked out of the whole political process," Rick Tyler told Mic. Tyler is a former top Cruz aide who resigned after a dustup over an anti-Rubio video and now provides campaign commentary for MSNBC.

Voters "feel like the game is rigged against them, which it is to a large extent — [but] they're finding their solace in a billionaire," said Tyler, who called recent Trump remarks "incoherent."

Cruz, Tyler told Mic, "has got money... He's got plenty of volunteers and organization. What he really needs now is to show that the establishment has rallied behind him and that they would publicly say that we can work with Cruz and that we endorse him and that we support him."

Maybe members of the establishment don't like Cruz personally, but "they know they he would be a far better president and commander-in-chief," Tyler said.

Case in point: Sen. Lindsey Graham, a onetime presidential hopeful himself, went from likening a decision between Cruz and Trump to picking between being "shot or poisoned," to reluctantly coming to terms with the idea of supporting his fellow senator.

"He's not my preference," Graham said per the Associated Press. "But we are where we are. And if Trump wins Florida and Ohio, I don't know if we can stop him."

Having Fiorina "come in was a step; having Lindsey say what he said was a step," Tyler told Mic.

But as to whether there's anyone who could join the "Cruz Crew" and create a sensational domino effect that would attract droves of voters to the Texan?