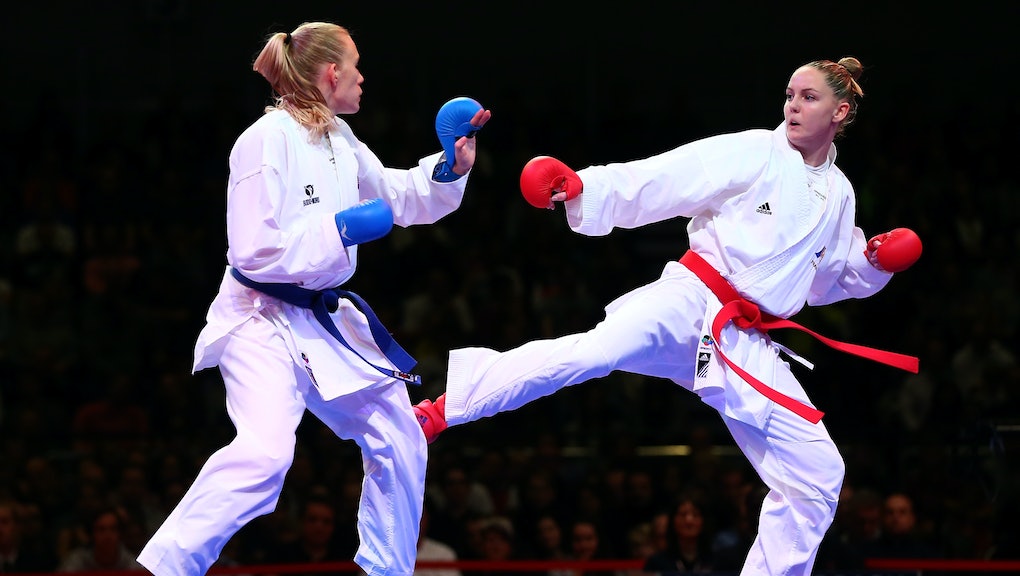 At the end of December, Women's Health's editor-in-chief Amy Keller Laird banned the notorious women's magazine phrases like "bikini body" and "drop two sizes" from its covers, Jezebel reported. The change was catalyzed by a reader survey asking what they liked and didn't on the covers. "Feel free to move on with some other magazine's cover, but we're no longer your girl," Laird wrote in a letter online.

While Women's Health made strides with the linguistic adjustment, many still feel like women's health content is dumbed down and slathered in pink when compared to men's (which usually has to do with strength or muscles).

Read more: This Artist Is Using Her Body as a Canvas to Make a Statement About Body Image

"Women's magazines, on the other hand, offer a fantasy of mastery for women," according to the Atlantic. Many magazines' track records, however, don't exactly empower women's body images, but rather distort them.

Even on a medical level, women experience more pain but are more often dismissed by doctors, according to the Huffington Post, which adds to the misunderstanding in addressing and also advising women about their health.

Below are some blatantly sexist women's health tips that shouldn't exist:

"But certain exercises can lengthen your own leg muscles and make them look a little more like the ones you see on fashion show runways," the article said. Maybe promoting trying to achieve runway model body types instead of striving for our healthiest selves isn't the best idea?

The women's magazine advertised the celebrity trainer-approved workout, which would "tighten muscle fibers to eliminate the bumpy appearance of cellulite." Cellulite — or rather, solutions to it — is commonly covered by women's health magazines, since it's more prominent in women than men, Scientific American reported. But up to 90% of women have some, so its bad reputation should just be dropped by now.

While it can be a good idea to combine strength training and cardio into your fitness routine, this tip from Brides assumes that women not only totally avoid strength training (which is not true) but mostly do cardio in the form of Zumba or pilates. But what about sports like kickboxing?

This workout routine promises those glorified flat abs in just two minutes. But in reality, spot reduction, which is blasting the fat off of one area, is more or less a fitness myth. When you lose weight, it can come from anywhere in the body.

5. "Consider Yourself Very Lucky if You Don't Have One of These 4 Vaginal Disorders" — Women's Health Magazine in 2015

Although vaginismus and lichen sclerosus are serious medical conditions, maybe we shouldn't shame the women who do have them by pointing out how they "make life difficult for some unlucky ladies."

6. "How to Make Your Toes Look Less Gross (Pedicure Not Required)" — Women's Health Magazine in 2015

"Sandal season is here — and after months of being cooped up in boots, your feet could probably use some major TLC," the introduction to the article said. "Are your toenails not quite ready to be shown off in strappy sandals, though? We thought so. Follow this advice for taking care of the most common problems so you can show off your toes all summer long." If you want to wear sandals, the simplest answer is to probably just wear sandals.

The article said: "Point being, while pursuing the comfort of emptying your bladder, you don't want to inadvertently make someone else feel uncomfortable or awkward!" For most people, this is probably not a realistic concern. Especially the part about running the water when at a date's place, since "there's no logical reason to be bashful about a guy you like hearing you. But of course, embarrassment isn't logical." Oh, right.