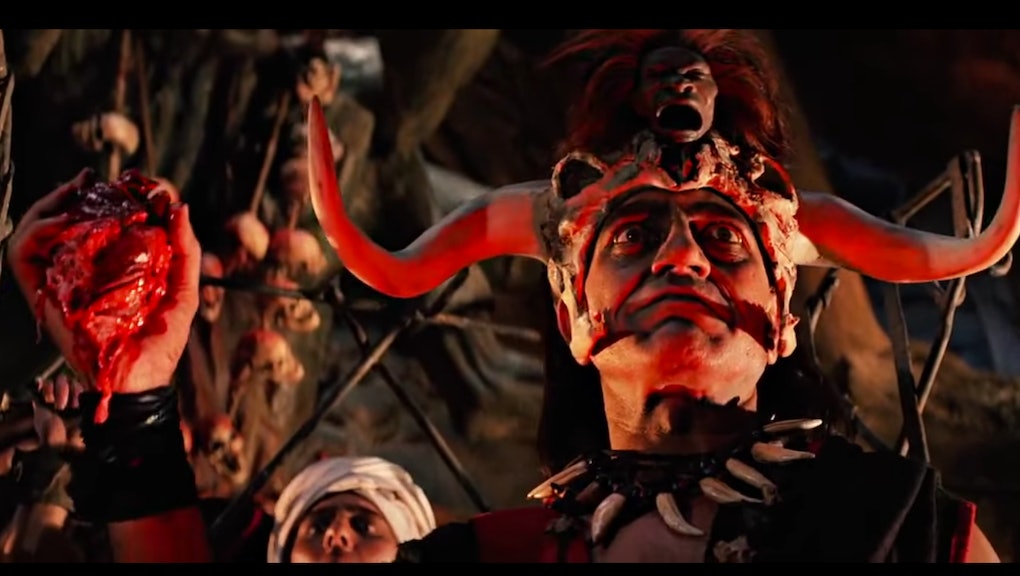 In the five seasons Discovery Channel's Naked and Afraid has aired thus far, the survivalists in the show have had to deal with dangerous animals, disastrous weather conditions and the scarcity of food — all naked, because reasons. In anticipation of the Naked and Afraid season six premiere's arrival on Sunday night, the series has teased a clip of its latest episode, sending two survivalists into Alabama — and it's seriously intense.

In this clip from the episode, the male survivalist, Jeremy, sees a rattlesnake within the forested area, noting that it's one of the most venomous snakes in North America. However, he and his female counterpart, Cassidy, are hungry, and it's a quick source of food. Thus, Jeremy traps the snake's head with a stick, using his free hand to hack it off with a machete.

While gutting the snake, he holds it's still-beating heart in his hand, before calmly downing it in one bite. Now, if that sounds like something out of Indiana Jones and the Temple of Doom to you, you're not far off base. However, in the moment, it's necessary — and the beating heart was merely a function of the snake's not-yet-fully-deactivated nervous system.

"After he's killed the snake, he's gutting it," Naked and Afraid Executive Producer Steve Rankin told Entertainment Weekly in an interview. "But like in many kills, especially with reptiles, the nervous system is continuing to function even though the animal is dead. He removes the still-beating heart, and he looks at it, and he just pops it into his mouth ... We talk about having heart, and putting your heart and soul into things — he certainly put his heart into that."

The survivalists don't seem as much scared as they are naked — perhaps it's the animals that should be afraid from now on.

Check out the badass Naked and Afraid teaser ahead of Sunday's premiere below.