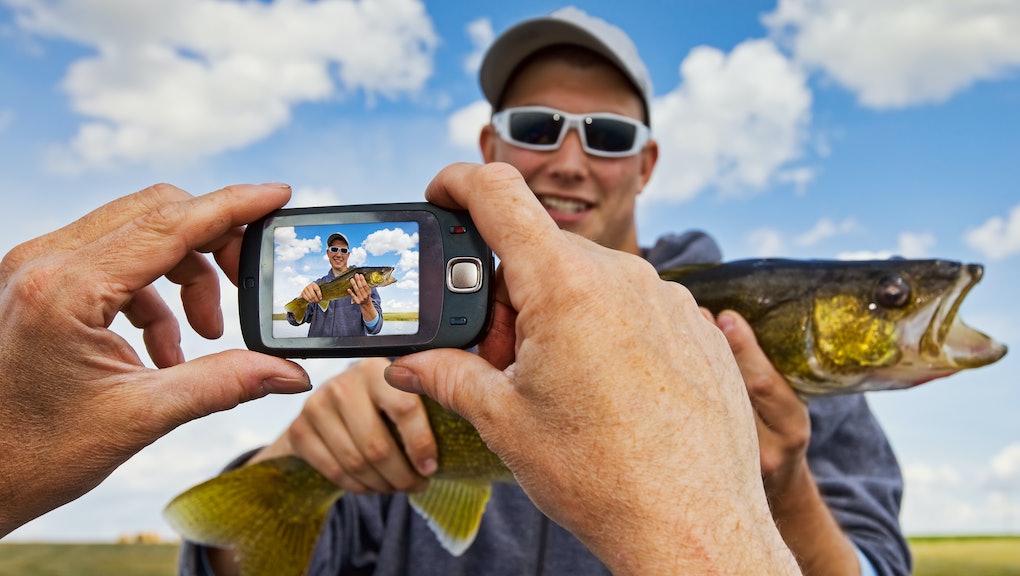 Would You Bang a Guy Who Posed With a Freshly Caught Fish on Tinder?

If you're a single person on a dating app with an interest in dating (or just having sex with) men, chances are you've come across a picture of a bro and his dead fish before. He was probably wearing a baseball cap and the fish was probably dangling from his strong hunter-gatherer hands, and maybe there was a boat involved.

There is even a Tumblr devoted to this phenomenon, and a new survey (conducted by the fishing app Fishbrain, but still) has determined that significant percentages of men across the country have fish-inclusive Tinder pics. (Notably: 22% of Florida men, because obviously.)

Their popularity notwithstanding, the question of whether or not users find such images appealing in the first place remains.

A man and his dead fish: Every woman's wish?

In an effort to figure out if fish pics are a turn-on, the app surveyed over 1,000 sorority girls (lol) on the subject. Thanks to the discerning tribunal of Alpha Epsilon Phi, Fishbrain was able to determine that "46% of young American women (in their late teens and early to mid-twenties) find Tinder photos of men holding a fish more attractive than those of men without!" So there's that!

But if you're a bro currently deciding whether or not to include a dead fish in your Tinder profile, don't think too much about the exact numbers. Think about the fish whose life you ended. Shouldn't it have meaning and purpose? "Don't let my death be in vain," says the spirit of that fish you killed. It wants you to get laid.

So go ahead and upload that manly fish pic, you man! There is a fair chance it could at least help you score with a member of AEPhi and/or a member of a fishing-oriented social networking platform. Or alternatively, it could make people think you're a weirdo who's obsessed with fish. That's a risk you should just be willing to take.