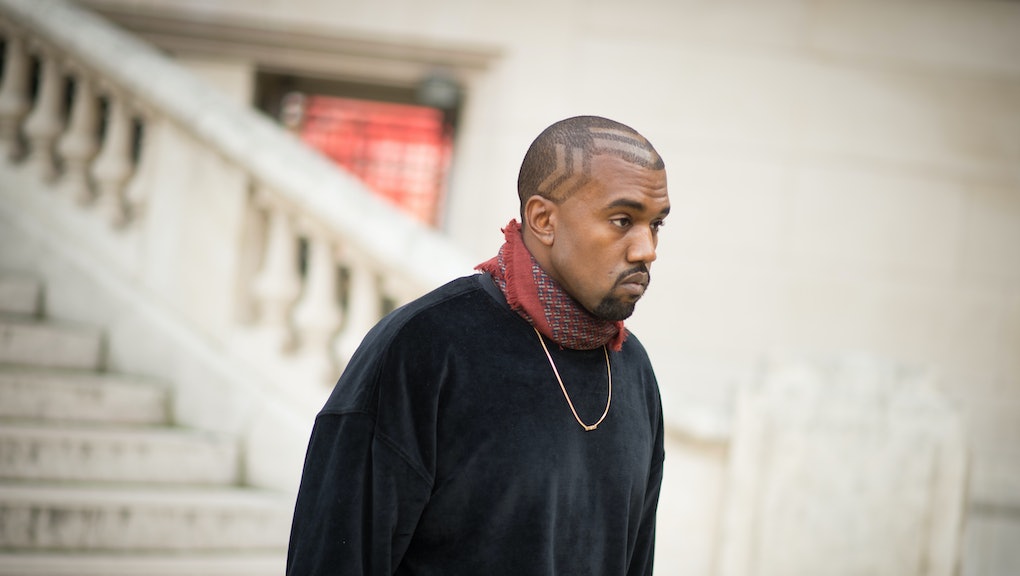 Suits jackets are out. Especially suit jackets on women.

Other important takeaways from the 19-tweet-long firestorm: Yes, Kanye believes in his ripped homeless sweaters.

Also, in a big eff you to men who love wearing yoga pants, West declared that he likes women in yoga pants.

So what is the reason behind such proclamations? It would seem that some unnamed designer pissed off West by inviting him to their runway show, but not their home. "Don't try to use me for advertisement or to make your proposed trend relevant," he wrote.

It's hardly the first time West has taken to social media to pop off about fashion. In a now-deleted ramble from 2012, West issued a lengthy list of menswear items he hates, which included button-up shirts with hoodies, hoodies with sport coats, sport coats with button-up shirts, jeans and dress shoes, khaki trench coats with jeans and off-brand workout sneakers, khaki cargo shorts and "big ass striped scarves."

A year later, West lambasted Sway after the radio host called out West's then-failed fashion line. "You ain't got the answers, Sway!" West yelled on Sway's show. "I've been doing this longer than you! You ain't spent 13 million dollars of your own money trying to empower yourself! What's the name of your clothing line? We don't know."

In the years since, West has managed to carve out a place for himself in the fashion world, designing two sold-out capsule collections for A.P.C. and inking a $10-million dollar deal with Adidas. So why is he so mad? The fakes, remember.

Will West clarify the intended receiver of his shots fired? We'll have to wait and see.