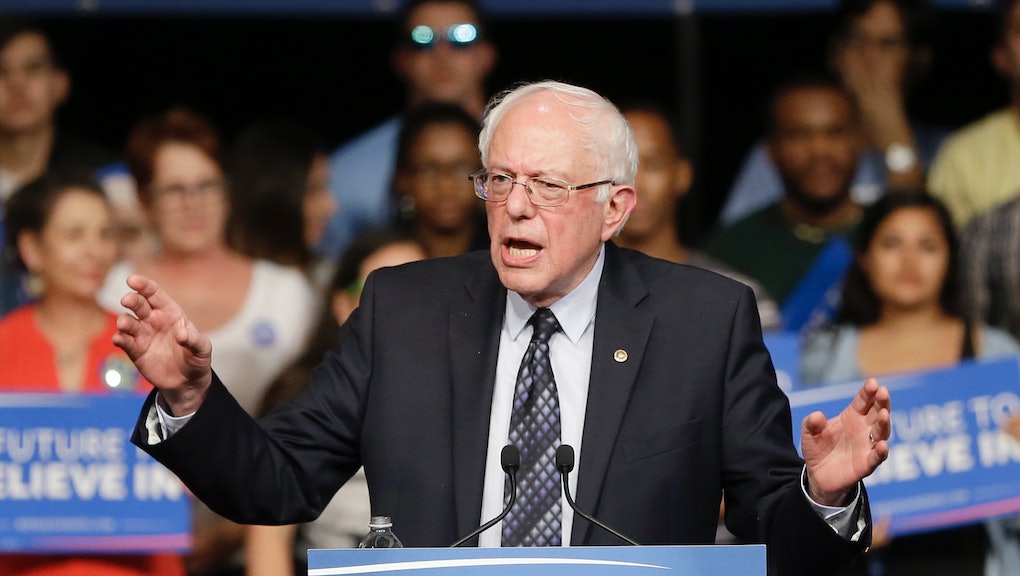 March 15 Primaries: Here's Where Bernie Sanders May Surprise Us Next

On Monday, the day before Michigan's primary, the release of two surveys underscored the monumental difficulty Bernie Sanders would face in giving frontrunner Hillary Clinton even a scare. (A win? Forget about it.) One poll had Clinton crushing Sanders 61% to 34%, while another showed a narrower gap, with Clinton up 55% to 42%.

The next day, Sanders won, beating Clinton 50% to 48% in one of the most remarkable upsets in recent political memory. Clinton actually grew her delegate lead on Tuesday night, thanks to her 66-point rout in Mississippi.

But if Sanders could notch a win in a delegate-rich industrial state like Michigan, even amid a mounting sense of Clinton's inevitability, it was only natural to ask: Where else might he be poised to jolt the political world?

The upcoming primary contests on Tuesday offer Sanders a high-stakes opportunity to prove that Michigan was more than a fluke. Here's an overview of the day's contests — and Sanders' prospects for once again confounding the prognosticators.

With 214 pledged delegates at stake, the Sunshine State is a plum prize — and Clinton is virtually certain to win the lion's share of the delegate haul.

With a large population of Hispanic and older voters, Florida is friendly terrain for Clinton, who leads Sanders 62% to 31% in the RealClearPolitics polling average.

Clinton also leads in Ohio, but by a margin that looks increasingly surmountable after Sanders' surprise win in Michigan, another Rust Belt state hard hit by deindustrialization and the Great Recession.

Clinton leads Sanders 57% to 37% in the RealClearPolitics average, a margin virtually identical to her lead in the run-up to Michigan. But a Quinnipiac survey released this week showed a narrower 52% to 43% gap, and Sanders' sharpened attacks on Clinton for previously supporting free-trade agreements may help close it.

The contest will award 143 pledged delegates.

Save Iowa, where he effectively tied Clinton, Sanders has won each Midwestern state to vote so far, a streak he hopes will extend to the Show Me State.

While there hasn't been a public poll of the state since August, when Clinton led decisively, Sanders stands a good chance of pulling off a win here. African-American voters — primarily concentrated in the Kansas City and St. Louis areas — accounted for only 15% of the 2008 primary electorate, so Clinton can't rely on her strong support with those voters alone to push her over the top. Blacks comprised 21% of the Michigan primary electorate this week, and Clinton's 40-point margin of victory with those voters proved insufficient.

Meanwhile, Sanders is likely to run up the score in the largely white and rural central part of the state, and given his support among younger voters, he can count on a robust showing in the university town of Columbia.

The state will send 71 pledged delegates to the Democratic National Convention.

As in other Southern contests, Clinton is likely to ride strong African-American support to victory in the Tarheel State, whose primary awards 107 delegates.

Her margin of victory may be considerably narrower than elsewhere in the South, though. The RealClearPolitics polling average finds her leading Sanders 53% to 33%, while she won neighboring South Carolina by 74% to 26%.

For Sanders, winning the state where President Barack Obama launched his political career and Clinton herself was born would mark a significant coup.

It also looks like a long shot. A Chicago Tribune poll released this week showed Clinton thumping Sanders 67% to 25%, and it'll be difficult for Sanders to overcome Clinton's likely dominance in Chicago.

There are 156 pledged delegates at stake.

A tough road ahead: Say Sanders wins Ohio and Missouri, loses Florida and North Carolina and manages to fight Clinton to a draw in Illinois. Sanders goes on to romp her in the West, handily win the remaining Midwestern contests and scores landslides in white working-class-heavy states like Rhode Island and West Virginia.

Sounds like political revolution is brewing. But as the New York Times' Nate Cohn laid out Wednesday, Clinton would still easily win the nomination under this scenario, thanks to the huge delegate lead she's already built. Per Cohn's calculations, Sanders needs to win about 60% of the remaining delegates up for grabs to secure the party's nod; of those awarded so far, he's won roughly 40%.

Lightning rarely strikes twice — and Sanders needs a lot more than that.