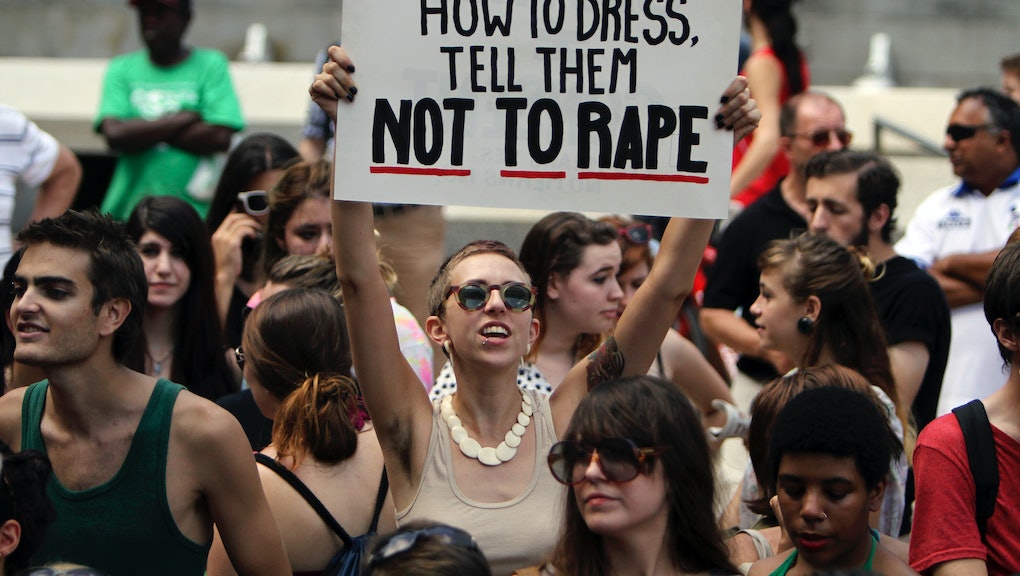 A Spanish judge is under investigation for asking a rape survivor if she thought about shutting her legs in order to avoid being sexually assaulted. It's 2016, but yes, that is a thing that happened.

A Spanish judge is under investigation for asking a rape survivor if she thought about shutting her legs in order to avoid being sexually assaulted. It's 2016, but yes, that is a thing that happened.[

According to the Local, the Clara Campoamor Association, a feminist organization to combat gender violence, is pushing for a full review and suspension of Judge María del Carmen Molina Mansilla, a magistrate in northern Spain, who reportedly asked a pregnant woman if she tried "closing her legs and all her female organs" during her alleged assault.

The group claims Mansilla showed "obvious disbelief" of the victim and asked a series of "leading and offensive" questions when the woman appeared in court in February, one day after reporting her partner, who "repeatedly abused her both sexually and physically."

"This question is offensive, degrading and humiliating," Blanca Estrella Ruiz, president of the Clara Campoamor Assocation, told the Telegraph. "It shows a complete lack of professional rigor and ethical treatment of the victim."

Ruiz's organization isn't alone in making that claim, or in calling for Mansilla's suspension. A number of people have taken to social media to express their outrage:

Translation: "I can't quantify the disgust that I have for Judge María del Carmen Molina Mansilla. Madam, #WeWantToLive."

Translation: "Maria del Carmen Molina Mansilla, judge of Vitoria: If one day this happens to you, I hope they ask you if you shut your legs. SUSPENSION NOW."

Ruiz went on to explain the real issue with Mansilla's questioning in a statement to Europa Press: "Such questions are not only unnecessary to the investigation but are completely offensive and violate the dignity of the victim."

They're also the sort of questions Mansilla asks regularly, according to Ruiz's organization, which claims the judge's alleged behavior is not an isolated incident. Rather, it's part of a pattern of disbelieving victims of sexual assault.

"Other women have lodged complaints about the re-victimization they experienced in this court," Ruiz said. "Women are scared as to what might happen to them as victims in this court and it is disincentivizing them to report such crimes."

"Women are scared as to what might happen to them as victims in this court."

Unfortunately, that's not the case solely in Mansilla's court room, or even solely in Spain. Sexual assault survivors are routinely implicated in their own attacks by the legal system, with questions about their behavior often predicated on inane misunderstandings of rape, trauma and basic physiology. Mansilla asking if a victim tried to keep her legs closed to avoid an act of sexual violence is on the same spectrum of ignorance as Todd Akin asserting the woman's body could "shut that whole thing down" if she got pregnant as a result. She and other survivors can be, and are, denied justice as a result of institutionalized victim blaming.

Take, for example, the Swedish judge who, in 2015, acquitted a man who raped a 13-year-old girl because the victim's body was "well-developed." He merely mimicked a slew of American judges who have also saddled victims with responsibility for their assaults — like Montana District Court Judge G. Todd Baughe, who, in 2013, sentenced a teacher to 30 days in jail for repeatedly raping a 14-year-old student, claiming the victim had "as much in control of the situation" as her rapist.

It's also not only the justice system that questions survivors about what they did to cause or avoid being attacked. Ours is a culture that tells women, in particular, to avoid alcohol in order to avoid sexual assault, that routinely asks what victims were wearing when they were raped. When survivors don't report their abusers, they're pressed to go to the police and criticized for staying silent.

But why wouldn't they avoid going public? Just one month before Mansilla was faced with the Spanish survivor in question, a New York City councilwoman had to explain on national television why speculating about victims' behavior is a deeply troubling response to allegations of sexual violence. Before that, there was Jameis Winston, the Naval Academy, Ohio University, Maryville and Steubenville and more.

Virtually everywhere survivors turn, they face questions about what they — not their abusers — could have done differently to avoid being raped. They face judges like Mansilla, who are meant to defend them but disbelieve them instead. And perhaps Mansilla will be suspended. Still, that would just be one small step toward solving an enormous problem.