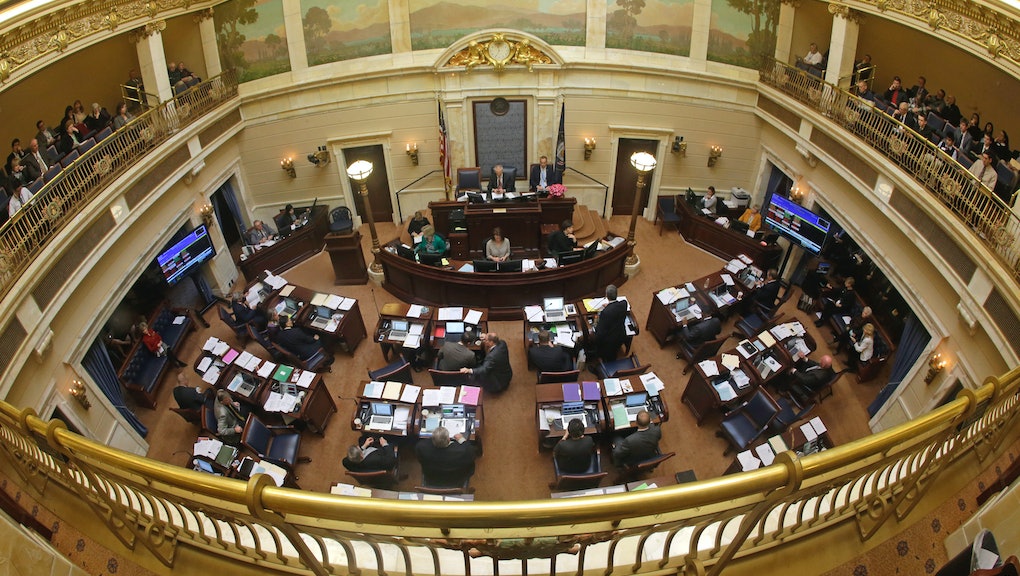 A group of Navajo demonstrators got kicked out of the Utah Senate gallery on Monday after protesting the defeat of Senate Bill 170, which would have changed Columbus Day to Indigenous People's Day.

One protester reportedly called Sen. Todd Weiler (R-Woods Cross) a "racist" and claimed he was on "stolen land," according to the Salt Lake Tribune.

But that's only half the story. The rest involves the actual debate over the bill, which took place on March 1 and quickly devolved into one of the more dizzying displays of ignorance to grace a legislative body in years.

The Tribune reports that Sen. Jim Dabakis (D-Salt Lake City) sponsored the bill. He argued that SB 170 was "meant as no disrespect to any holiday or any person," including Columbus.

"[But] our history did not start with Pioneer Days and the celebration we have then," Dabakis added, explaining that, before white people showed up, "there weren't just people, there was a thriving, incredible, amazing civilization that was here and we do not pay tribute to that situation."

That was the good part. On the other side, here are some of the arguments opposing senators used in favor of keeping Columbus Day:

Others concurred that changing the holiday to Indigenous People's Day would be a "slap in the face" to Italian-Americans.

Weiler went on a tirade about how "inconceivable" it was that Columbus could have killed millions of indigenous people, saying most of them died from smallpox and other diseases (ignoring, of course, that smallpox only came to the Americans upon Columbus' landing there).

Weiler also blamed Native Americans for giving Europeans syphilis. He closed by comparing blaming Columbus for killing off Natives to "blaming the native population for people who die using tobacco and cocaine, which the natives introduced to the Europeans."

Here's an excerpt, for readers with strong stomachs:

The fact is, before Christopher Columbus arrived in what is now the Caribbean, indigenous Americans had no sustained contact with Europeans.

But from 1492 to 1900, the Native population in the U.S. specifically plummeted from over 10 million people to less than 300,000 — the result of prolonged slaughter, warfare and exposure to diseases brought by colonizers from England, France and other European countries.

Columbus Day — which essentially celebrates the commencement of this slaughter — was declared a federal holiday in 1937. Since then, a growing number of cities have voted to change it to Indigenous People's Day, choosing to honor the Native Americans instead of the guy who sparked the systematic killings of their ancestors.

St. Paul, Minnesota; Seattle, Washington; Portland, Oregon, and at least six other cities have adopted the change, according to the Washington Post. Senate Bill 170 was defeated in the Utah Senate by a vote of 15-10. It would have been the second statewide change to Indigenous People's Day in the entire country, after South Dakota.