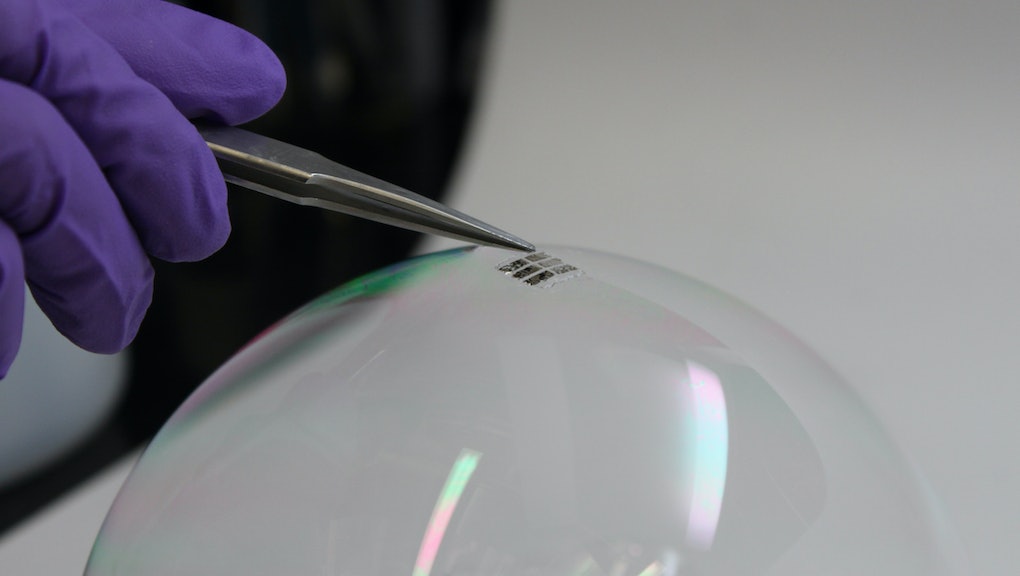 Despite advances in solar technology, light-absorbing panels are still generally bulky, onerous and expensive to set up. But a few scientists at the Massachusetts Institute of Technology are trying to change that.

Professor Vladimir Bulovic and colleagues Joel Jean and Annie Wang have teamed up to create a lightweight solar cell, something that could be rolled out quickly and easily on a rooftop. So far, they've made significant progress. The group has created a solar cell with a thickness of 2.3 microns, according to a paper released in Organic Electronics. The cell is so insubstantial it can rest on the skin of a soap bubble without causing it to break.

To make it, the researchers used parylene, a flexible polymer that performs well at a variety of temperatures, to seal the solar cell rather than glass. The solar cell itself is 400 times more powerful than those already on the market, generating 6 watts of power per gram, Smithsonian.com reported.

The benefit of these new solar cells is not only that they could lessen the expense of installation, they also can be placed in a larger variety of locations and settings than their predecessors.

Going forward, the scientists will explore how to manufacture these new solar cells at large scale, according to Smithsonian.com. Still, the technology will likely take a decade to reach consumers.