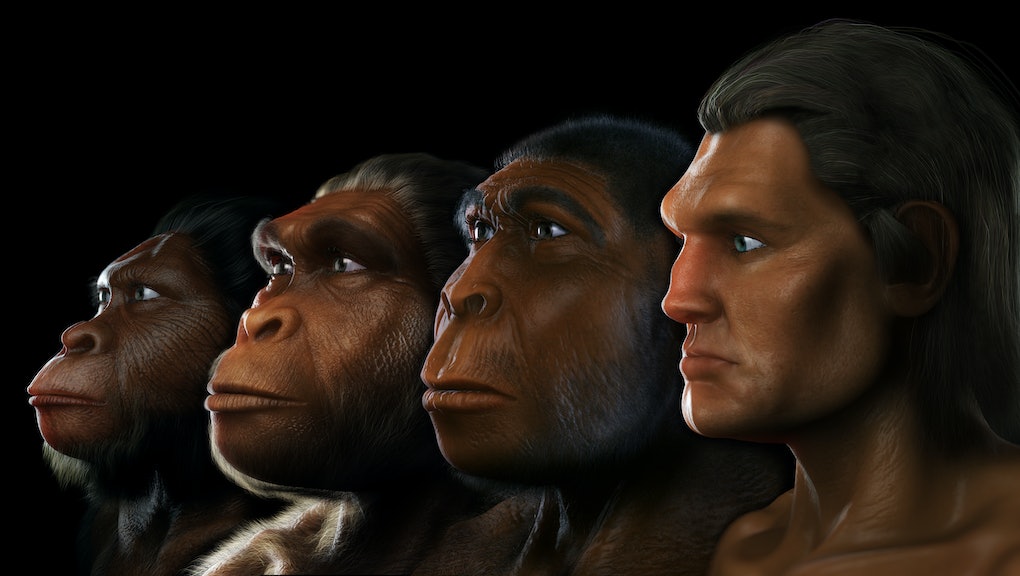 This Is How Sliced Meat Completely Changed the Human Body (And Gave Us Hip-Hop, Too)

Early humans were able to learn to speak only after they stopped eating food like dummies.

In a new Nature study, researchers from Harvard University posited that the reason modern man has smaller teeth, jaws, chewing muscles and guts than early hominins is because, at some point, those early humans figured out they could slice meat and pound root vegetables instead of trying to chew them up raw.

Have you ever tried to eat a rutabaga or goat shank without cutting or cooking it? It takes an inordinate amount of energy to chew it. Our ancestors 2.5 million years ago discovered that sharp rocks and other primitive tools could make raw food a lot more palatable.

The experiment: Harvard evolutionary anthropologists Daniel Lieberman and Katherine Zink hooked up a bunch of volunteers' faces to electrodes, focusing on areas where chewing has an impact. Then they ran three tests: chewing raw or unprocessed meat and vegetables, chewing sliced and pounded raw food and chewing cooked food.

Chewing raw goat is "almost like chewing gum," Zink said, according to Science.

Because early members of the genus Homo didn't need to spend so much time and energy chewing everything, Lieberman and Zink deduced, they were able to evolve smaller teeth, jaws and snouts. That meant their lips could move with more nuance, like being able to form the mouth shape to make an "ooo" sound instead of an "uhh" sound.

Sliced meat led to the evolution of communication. It's how we went from "Auuggghhhh" to, "It was all a dream/ I used to read Word Up! magazine."

And just think where we'd be without that.

So the next time you hunt and capture a moose, don't feel bad that you can't just rip into its hindquarters like a ravenous primate. Because that chimp can't say "Eleanor Rigby," and, without making too many assumptions here, it's probably safe to say you can. You can thank your early, hairy ancestors who first took a sharp rock and went all Gordon Ramsay on some flesh.