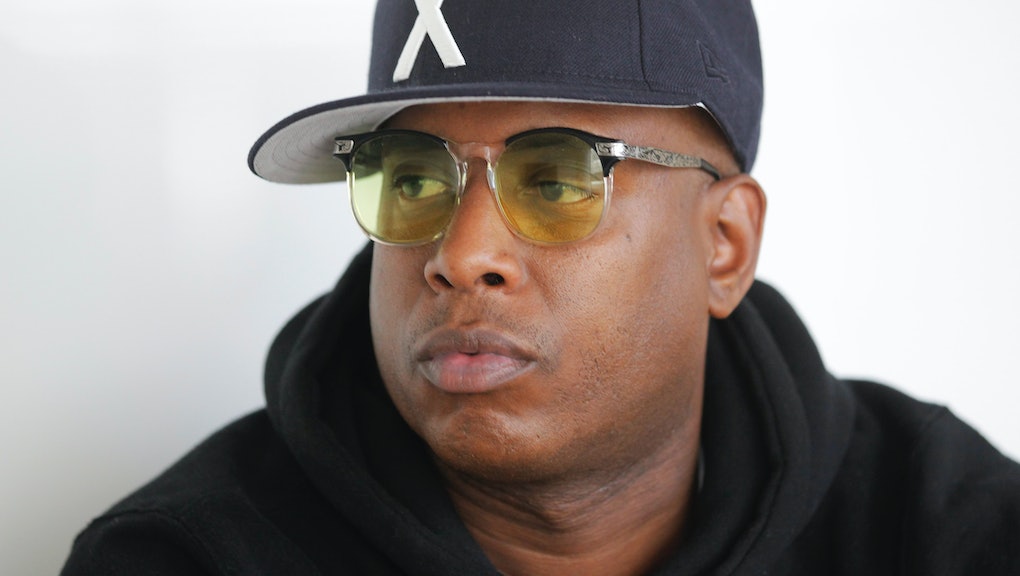 Hip-hop has always carried a distinctly loud note of resistance. But few rappers have risen to that call as consistently and potently as Talib Kweli.

The Brooklyn, New York-born rapper essentially built his career out of an act of rebellion. Black Star, his breakout collaborative project with Mos Def (now Yasiin Bey), condemned bigotry, discrimination and the violence within and without hip-hop over some stylish jazz-steeped beats. Nearly 20 years later, he's as active and outspoken as ever, and his protest has evolved with the times. Twitter is one of Kweli's outlets of choice these days.

"It's similar to having to come up with couplets," Kweli recently told Mic in a Skype interview. "It's good for your brain to try to achieve that clarity in small spaces."

Yet even condensed to 140 characters, Kweli's layered thought processes can be difficult to digest, and they're regularly confrontational. "If you agree with me, then it stops being an interesting conversation," he says with particular bite in light of a handful of shotgun-tweet rows: Lupe Fiasco, Bomani Jones and, most recently, Iggy Azalea, who took offense to her name being mentioned in Macklemore's polemical "White Privilege II."

Kweli has a lot to say about celebrities on Twitter who try to talk politics. It's trendier than ever these days, from rappers like Ja Rule appearing on Fox Business Network in 2015 to say he would consider voting for Jeb Bush, to Gwyneth Paltrow's pitiful attempt to live for a week on food stamps.

"There are a lot of people in the entertainment and sports industries who feel a certain way, but aren't politically educated enough to back their emotion up with the facts," Kweli said.

It's a reality that in many cases may do more harm than good.

"Before we got on stage with Mos Def, we had the Malcolm X Grassroots Movement sit us down and give us political education so we don't sound stupid up there," Kweli said, reminiscing on the early days of Black Star. "I wanted to make sure that our words were in accordance with the facts, and that I don't pull any terms out of the blue."

Compare that to today, when it celebrities like Raven Simone, Kelly Osbourne and Sam Smith speak freely about political issues only to avail themselves of their proper historical context later.

"You have a new generation that thinks that they started activism when they started a Twitter page," Kweli said, "but the responsible thing to do is to acknowledge that the movement has been around for a while and there's education to be had."

He mentions Rihanna's uncharacteristically political #FreePalestine tweet from 2014 when the Gaza Strip conflict had reached the pinnacle of wider media coverage after a prolonged period of coordinated airstrikes by Israel. Minutes later, it was replaced with a moderate peace-for-all type of statement.

"If you look at the Palestine issue on the surface, it's easy to see the injustice — this big, militarized, white, you know, Western-supported occupation on the land of brown people in unfair conditions," he said. "And artists like Rihanna respond to that without understanding the layers."

Strong dedication to an active cause is not enough to create change, Kweli insists. Without the right terminology to convey one's view the underlying message becomes muffled, lost or worse: detrimental to one's credibility.

"When people speak from emotion but without facts, their words simply fall apart," Kweli said in reference to Common's divisive Daily Show appearance in 2015, when the rapper argued that black people showing more love to white people will help cure racism. "There are artists whose heart is in it, but they go and make comments on a talk show that aren't in the language, and it becomes so easy to dismiss their entire careers based on that, you know?" Kweli said.

"We need perspective for our vocabulary, because some of it serves a fucked up system ... As a lyrical artist your responsibility is to be very aware of words and their meanings." — Talib Kweli

However, a talk show appearance does not make or break a movement, and we shouldn't expect it to. In a perfect world, every celebrity who shows their ignorance would simply redirect more attention onto those with their academic chops up. Unfortunately, this only happens selectively, and Kweli warns against conflating celebrity with authority.

"We can't participate in celebrity worship and expect them to voice a movement properly and make the problems go away," Kweli said. "That's ridiculous. But what can you do? If there's a race issue happening today, you can bet that my record will be playing on the radio tomorrow."

This almost exactly happened in 2014 following the police killing of Michael Brown in Ferguson, Missouri. Kweli found himself on CNN, scrapping with Don Lemon about the way his network had been portraying the unrest.

"Whenever something happens, the thing that media does is focus on just one party's reactions," Kweli said. "They talk to the rappers, black journalists, actors. There is a certain expectation for us to be the sole bearers of the issues."

Considering the media's thirst for celebrity commentary, Mic asked if Kweli ever felt he had taken to a public platform prematurely — a question that he owns up to in a heartbeat. He recalls his 2015 Real Time With Bill Maher interview in which he used "queer" as a noun for the gay community. Despite its gaining a more inclusive definition in recent years, the term still holds on to its inherent association with a very specific, politicized sexual identity. A gay friend called him out on the error — on Twitter, no less.

"We need perspective for our vocabulary because some of it serves a fucked-up system," Kweli said. "Terms pertaining to color and creed are used to determine the value of someone's contribution and it's a very greedy system that dictates that. As a lyrical artist your responsibility is to be very aware of words and their meanings."

Kweli is a vision of confidence when he claims that he is a better musician now than 15 years ago. He has remained a constant student, and this conviction can perhaps be found in the balance he has struck between what he says, how he presents it and on which terms. Every other celebrity looking to pin their brand to a cause would do well to become the same.