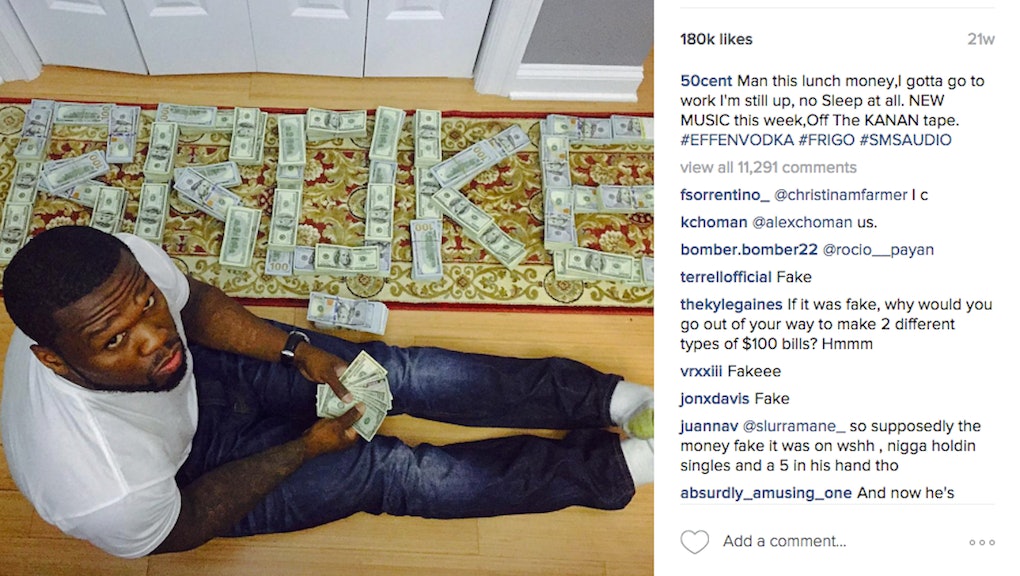 Behold, rapper 50 Cent, who weeks ago posted this photo on Instagram spelling the word "broke" using stacks of cash — despite having filed for bankruptcy in July 2015:

According to BuzzFeed News, the 40-year-old Queens native was asked to appear in front of a federal bankruptcy judge on Wednesday to explain why — if he has no money — he has been posting photos of himself on social media flaunting lots and lots of money.

The answer turned out to be pretty sad: The money is fake. He's been posting "prop" cash to maintain the appearance of success because a lifestyle of conspicuous consumption is the standard his fans have come to expect from him.

Maintaining a consistent social media presence is key to paying back his creditors, 50 explained in court documents:

"Just because I am photographed in or next to a certain vehicle, wearing an article of clothing, holding a product, sitting next to what appears to be a large sums of money or modeling expensive pieces of jewelry does not mean that I own everything in those photos," he stated, according to BuzzFeed.

On one hand, this is all pretty grim, considering its genesis: The "broke" post was a response to fellow rapper Rick Ross, who took shots at 50's financial straits during a radio interview in October. "Get rich or die trying, and now you bankrupt," Ross said, in reference to the title of 50's first major label solo album.

But 50 Cent, born Curtis Jackson III, has been facing money troubles for some time. Most stem from a pretty relatable issue: debt. Court documents filed in July showed 50's assets at between $10 million and $50 million, but also showed his liabilities at around the same amount, according to CNBC.

On the other hand, it's hard to feel bad for someone who flaunts their riches so openly in front of people who can't afford nearly as much. But it's not like many of us don't have a version of the same problem.

Debt is real, folks. CBS News reports that American household credit card debt reached almost $60 billion in 2014, while nearly a quarter of Americans with credit card debt have more debt than money in their savings, according to Bankrate. Average student loan debt for the class of 2015 was more than $35,000 — a record high, MarketWatch reports.

But as we all know, the real bottom line is simple: Broke or not, you gotta look good for the 'Gram. No matter our financial status, we're all worshippers at the altar of maintaining appearances. In a way, we are all 50 Cent. And 50 Cent is all of us.