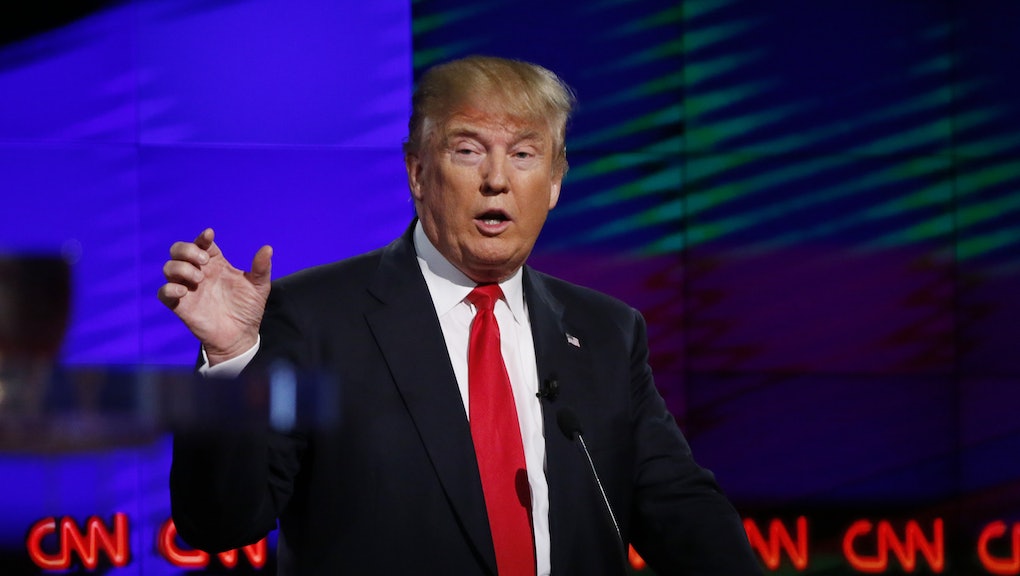 Tonight Was the Night the Republican Establishment Gave Up

The Republican establishment all but capitulated to Donald Trump on Thursday night, treating the party's frontrunner with kid gloves in the most subdued debate yet of the 2016 primary season.

Read more: Everything You Missed From the GOP Debate in Miami

Gone were the unsparing attacks on the billionaire real estate tycoon's business record, his character and even his credibility as a conservative. Ted Cruz, Marco Rubio and John Kasich instead tread carefully around Trump, gently prodding him at times but avoiding a scorched-earth approach against the man who remains overwhelmingly likely to be the party's nominee in the fall.

A man in charge: With a commanding lead in the delegate count and a decent chance of effectively securing the GOP nomination after next Tuesday's delegate-rich nominating contests, Trump needed only to avoid a disastrous performance. Accordingly, he adopted a low-risk approach, steering clear on the vehement attacks he's waged on rivals like Cruz, Rubio and the departed Jeb Bush in previous debates.

Trump's mission on Thursday night: To present himself as a credible standard-bearer who could unite the party's disparate factions, despite his penchant for incendiary rhetoric and relentless counterpunching.

"We're all in this together," Trump said. "We're going to come up with solutions. We're going to find the answers to things. And so far, I cannot believe how civil it's been up here."

Trump seemed to be enjoying himself — and it wasn't hard to see why.

Not biting the bait: After aggressively attacking Trump in recent weeks on everything from the size of his hands to his family inheritance, Rubio mostly stood down on Thursday night, following a string of dismal performances at the ballot box.

Even when Rubio did ding Trump, he did so in a largely mild tone. On entitlement programs, Rubio said, Trump's "numbers don't add up."

Cruz also went after Trump on the issue, noting similarities between Trump's rhetoric on Social Security, which the businessman vows to protect, and that of Democratic frontrunner Hillary Clinton.

But asked whether he'd just compared Trump and Clinton, Cruz would only say,  "I will let Donald speak for himself."

Later in the debate, Cruz did criticize Trump for his past contributions to Democrats — hardly a new line of attack, and one that appears well baked into Republican voters' assessment of Trump.

Not all hands-off: Notably, the sharpest attacks on Trump concerned his harsh rhetoric toward American Muslims and his stance on foreign policy — neither likely to damage Trump with voters, in light of exit poll data showing strong support for his proposed ban on foreign Muslims entering the country, and given that anger at the domestic political establishment is the defining theme of the topsy-turvy 2016 primary.

On Islam, Trump "says the things people want to say," Rubio said. "But presidents can't just say anything they want. It has consequences around the world."

The senator went on to call for working "together with people of the Muslim faith even as Islam faces a serious crisis within it."

Meanwhile, Cruz chided Trump for stating in February that he'd be "neutral" on the Israel-Palestine conflict — but after Trump asserted his staunch support for Israel, Cruz suggested that perhaps Trump's support for a peace deal wasn't "inten[ded]" to be anti-Israel, but that it was in practice.

Cruz also ridiculed Trump's foreign policy as amounting to chants of "China bad, Muslim bad." And later in the debate, he asserted that Trump's nomination would mean victory for Clinton — a sharp departure from the delicate tip-toeing that defined the bulk of the debate.

The road from here: Though the odds of vanquishing Trump are vanishingly small after his strong wins in Michigan, Mississippi and Hawaii this week, Cruz remains the only viable threat to Trump still in the race, with a win in Florida next week looking out of Rubio's reach and Kasich with no clear path even if he wins the Ohio primary on Tuesday.

Establishmentarians who fear Trump, then, are left to deal with the awkward reality that their best shot at dislodging him is to prop up a man who rails against his party's leaders as liars and has earned the enmity of his fellow GOP senators.

Basic mathematics essentially foreclosed any other option, but Rubio and Kasich did nothing to change that dynamic on Thursday.