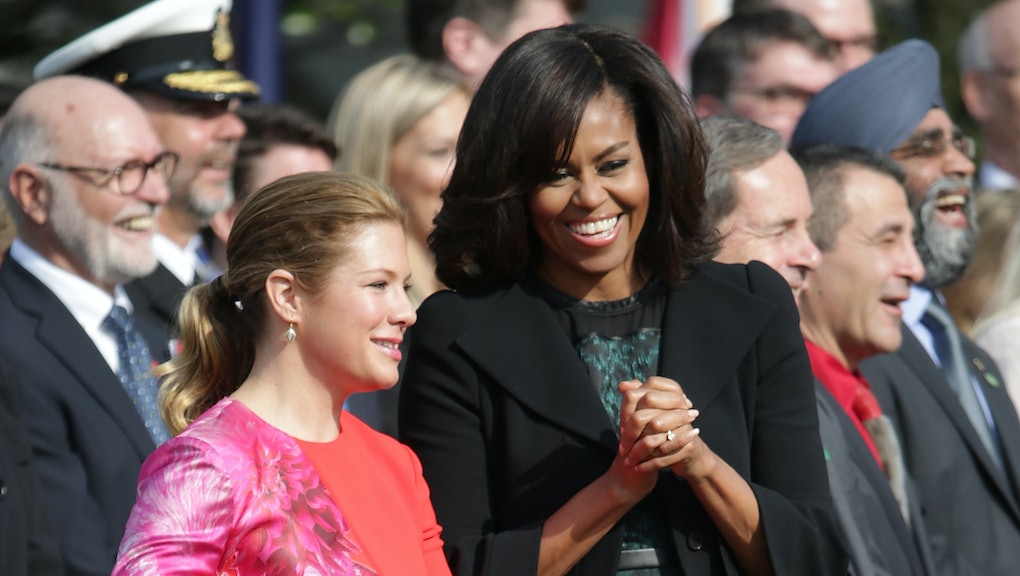 Michelle Obama and Sophie Grégoire-Trudeau Give Us Major BFF Goals

The bromance between President Barack Obama and Canadian Prime Minister Justin Trudeau might be the talk of the interwebs, but it's actually the budding friendship of first lady Michelle Obama and Sophie Grégoire-Trudeau that has us buzzing.

Grégoire-Trudeau, whom Obama calls her "soulmate," was even there to catch FLOTUS when she almost toppled over at an International Women's Day event where the pair spoke Thursday afternoon.

The two first met up that morning at an arrival ceremony on the South Lawn of the White House welcoming Grégoire-Trudeau along with her husband and their three kids.

"Sophie's a really smart, stylish woman, because from the moment that you show her the styles, she gives you exact reasons why it suits her or it doesn't suit her," Matis told Women's Wear Daily.

Later that night at the state dinner, Obama and Grégoire-Trudeau stepped out in bold floor-length gowns. (It should be noted: Their husbands clean up rather nicely as well.)

Grégoire-Trudeau wore another of the half-dozen Lucian Matis dresses she'd brought on the trip, this one a flowing royal purple gown with pink and orange beading along the bodice, while Obama wore a custom strapless navy blue floral jacquard gown from designer Jason Wu.

The pattern previously had appeared in multiple looks from the designer's fall 2016 collection.

Wu is a longtime Obama go-to, having outfitted her for both inaugural balls as well as her 2013 Vogue cover.

Grégoire-Trudeau may be following in her new bestie's footsteps, as she further immerses herself in the world of fashion after four months of her husband's tenure. Hopefully this is the beginning of a long-lasting bestie-ship.