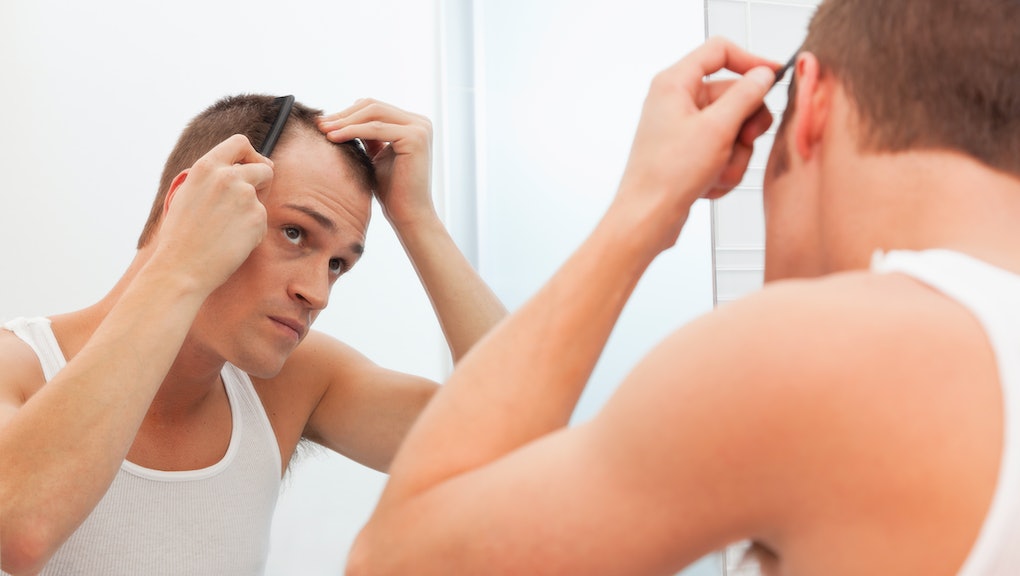 Guys, Stop Fearing Your Impending Baldness and Embrace It

Film and TV have never been kind to the bald man. For example: You have your George Costanzas, in which a bald head equals a meek personality; your Lex Luthors, in which a shiny dome implies failed plans of world domination; and even your Louis C.K.'s — the demented amalgamation of both.

When you aren't watching men like Jason Statham or Jude Law, the only airtime bald men seem to come by is via ads on how to cure baldness, which give the impression that baldness is a problem that men need to fix. So, we've got Rogaine, restoration clinics, even hair in a can — but not everyone can afford a $50 a month method to potentially reinvigorate their shrunken hair follicles. More importantly, not everyone wants to.

The fact is, a huge chunk of men will lose their hair no matter how thick their curls are right now. It's not your fault, though, and there's no reason men should berate themselves for a slowly receding hairline. It's simply a matter of crummy genetics, though it seems to zap the confidence of perfectly normal guys everywhere.

The biggest unspoken baldness issue men face is a lack of time: Male pattern baldness can sneak up on a man as early as age 16. According to the American Hair Loss Association, two-thirds of men experience some degree of hair loss by age 35. Unsurprisingly, for many men, the loss of their hair at such an early age can greatly affect self-esteem.

There's more to the bummer of hair loss than just a loss of confidence. In fact, the negative societal connotations of baldness have been around for hundreds of years. "Throughout the ages, a scalp adorned with luxurious hair has been assigned positive attributes of virility and power, whereas baldness has been associated with negative symbolisms," writes Dr. Albert M. Kligman, MD, PhD, in History of Baldness from Magic to Medicine.

"The Romans cut off the hair of prisoners, adulteresses, and traitors," he writers. "The French shaved off the hair of women who were collaborators and mistresses of occupying Germans after France was liberated in World War II. Early Christianity endorsed the tonsure style to make monks sexually unattractive, thereby expressing humility and religious obedience."

Historic ties aside, anyone can tell you that hair loss is a confidence zapper. As legendary baldy Larry David once said, "Anyone can be confident with a full head of hair. But a confident bald man — there's your diamond in the rough."

Do products even work?

There are some people out there who accept it and simply let their baldness happen. However, there are also those who feel the need to fight it and ask their friends — those with full heads of hair — for advice. For the most part, people give stock answers, in which they point toward hat stores, send off links to Rogaine or pass on pearls of wisdom like "just suck it up and buzz your hair off."

The market is saturated with salves, solutions and creams for prematurely shiny domes that seldom work. Did you know that there are products out there that harvest the fat from emus for hair regrowth? (Spoiler alert: It doesn't work, leave emus alone.) There's even a whole wikiHow article dedicated to teaching one how to mix garlic, honey, tea and raw eggs as a natural remedy. (That one doesn't work either.)

Still, between experimenting with volumizing shampoos, slopping various goops on their heads and combing hair over to cover up bald spots and receding hairlines, it seems like guys will try just about anything to stave off their inevitable baldness. Even Rogaine, which is pretty much the only product on the market that boasts results, doesn't always do the trick. In fact, a study by the FDA concluded that only 39% of Rogaine users are likely to see positive results — that's not a very promising number.

"It's all psychological," Dr. Lee Milner told Mic. "You have to do this as you age, you're gonna gain weight, you're going to lose your muscle tone, your body's going to change. Accept yourself as you are, say encouraging things to yourself and don't compare yourself to other people. You can't look at some guy with great hair and wish you were like him. Figure out who you are and focus on that — who cares if you have hair."

Does that mean turning a delusional eye to your head? No. "There's nothing unhealthy about having confidence," she said. "The actual definition of delusion is, 'an idiosyncratic belief or impression that is firmly maintained despite being contradicted by what is generally accepted as reality or rational argument, typically a symptom of mental disorder.' But, that's not how all delusions work."

It may seem like a cop out to be told to handle your impending baldness in your own way, but there is no simple solution for everyone. So why not look to celebrities like Larry David, Jude Law and Bruce Willis? Why not find a barber who can make you look like a rock star — albeit a balding rock star. Look in the mirror, let out a loud "fuck it!" and let your dome glisten in the sun! Work with what you have until it's gone, and then just let your hair represent your inhibitions by allowing it to gracefully fade away.

Gentlemen, it's time to embrace "male pattern boldness" — an outlook on life where you take the metaphorical bull by its bald horns, mount the bastard, and ride the fucker into the sunset. Going bald sucks, but you shouldn't let it ruin your life.